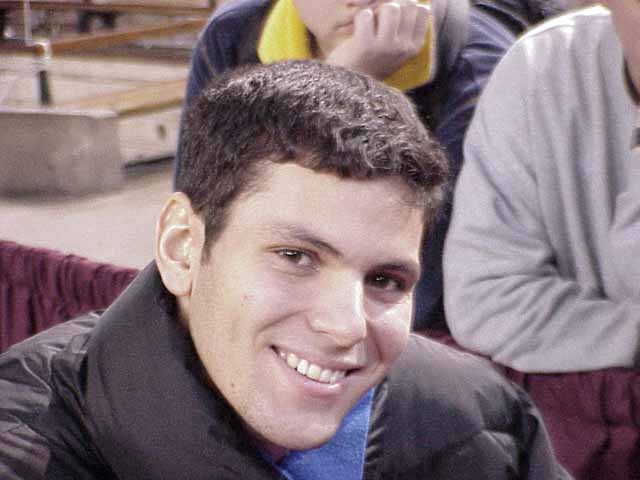 Eduardo Simao Texeira is one of the four Brazilians who made the Top 8 at this year's Magic: the Gathering Latin America Championship, clearly showing their dominance in the tournament, as well the Mexicans (who put three players in the Top 8).

Simao is playing a "Covetous-Red" deck, which is a newer incarnation of the Wildfire deck which did so well at last year's Magic World Championships in Tokyo. This deck features large amounts of artifact mana and Wildfire, which decimates the opponent's mana (he has to sacrifice 4 lands and each of his creatures takes 4 damage, which also puts mana-creatures like Llanowar Elves and Birds of Paradise out of commission), while allowing you to keep casting bombs like Covetous Dragon, Masticore, Temporal Aperture and Mishra's Helix. The mana-control element of the deck is enhanced with the presence of 2 Tectonic Breaks, 2 Mishra's Helix and 4 Rishadan Ports in the maindeck, as well as 1 more Tectonic Break, 2 Impending Disaster and 4 Boils in the sideboard. The Mishra's Helix can be a game-winner all by itself if played fast enough, because with all the fast mana that Wildfire decks use, the Covetous Red player can tap all of his opponents' lands during their upkeeps, and this effect, coupled with the effects of Rishadan Ports, can be devastating. The deck's winning cards are usually Masticore and Covetous Dragon, and occasionally one massive artifact attack, courtesy of everybody's favorite Silver Golem: Karn (which can transform a non-creature artifact into an artifact creature with Power and Toughness equal to its casting-cost for a mere 1 colorless mana). A very interesting artifact in the deck is Temporal Aperture, which excels in this deck even more due to the presence of 4 Masticores. The "Big Cat", as the Masticore is affectionately known, requires its controller to discard a card at the beginning of his upkeep or bury the Masticore. The Aperture allows its controller to keep playing spells despite having few cards in hand due to the Masticore. Texeira rounds out his creature-control base with 4 Masticores, 4 Wildfires and 2 Earthquakes, as well as 2 more 'Quakes in the sideboard and 2 Crater Hellions, which annihilates decks like Angry Hermit, Stompy or White Weenie.

Eduardo has been playing for four years, and is an active member of Brazil's Team Brasilia, one of that country's most successful teams. Not only has Eduardo made Top 8 at the first ever Latin-American Championships, but he's also finished in the Top 8 at Grand Prix Sao Paulo in 1999, and is a two-time member of Brazil's National Team. Team Brasilia also managed to place another member in the Top 8, Alex Sousa, who will be playing against fellow Brazilian Carlos Romáo in the Quarterfinals.

When asked about the matchup against Le Saux, Texeira answers: "Only Boil can save me". With all the counterspells that Rafael is packing in his Accelerated Blue, it'll be tough to get a Wildfire through his defenses, as well as other major threat cards like Mishra's Helix or Boil, after sideboarding. Texeira lost to Le Saux 2-0 during the Swiss portion of the Championships, but he is looking to change the story. After sideboarding, with more Tectonic Breaks, Impending Disaster AND Boil, things could get ugly.

So why Covetous Red? The decktype has virtually disappeared from the metagame on worldwide level due to the emergence of Replenish. Says Texeira: "The deck loses to Replenish and Islands. Any other deck is practically a bye". Strong words, but with an element of truth nonetheless. Decks based on mana-creatures or weenies just can't do anything about a Wildfire or a Crater Hellion, and most deck can't keep up with the mana advantage provided by Wildfire. There's only one Replenish deck in the Top 8, so for now things are looking good for Eduardo Simao Texeira.