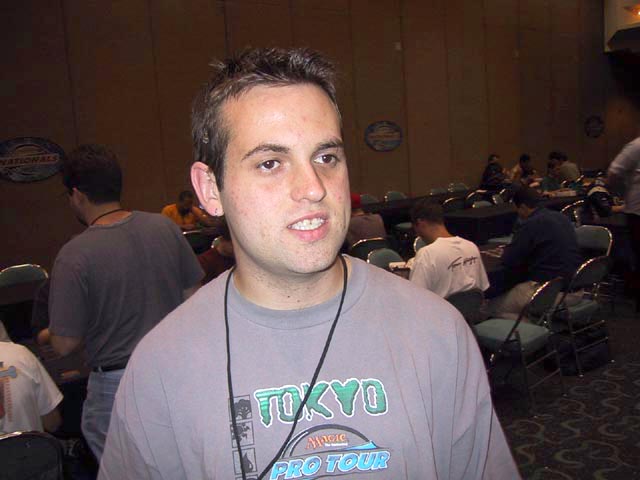 Elijah Pollock was one of the few undefeated players in the Standard portion of the tournament, double drawing into the top 8 with his Counter-Rebel deck. The 21-year old student at York University went 5-1 in the draft, but this isn't the first time that he has been successful. Elijah is a two time top 8 finisher at the Junior Pro-Tour. His success don't stop there, however. Pollock also has some high finishes at Pro-Tour, but no break out success. He finds it exciting to have a chance at this year's Canadian National Team.

Elijah's choice to play Counter-Rebels came from numerous sources, not the least of which was visiting friend Sigurd Eskeland handing him the cards before the tournament.

"I don't own any cards and while we were planning on playing Probe-Go, the Grinders changed things. We shifted to beat all of the Skies and Black/Blue/Red that we thought we'd see. The deck was great! Very solid. After finishing near the top Day One, I just needed something solid. It worked really well for me. I lost in the first round, and I haven't lost a match since then."

He felt that a lot of his success in the draft came from his heavy draft practice with Gabe Tsang. All told, the seven drafters who regularly play with Gab Tsang finished with a collective 31-10-1. "I pushed into Blue/White right away, and I got some strange looks at my table for taking a Dream Thrush extremely early in the draft, but I knew from our testing that the Blue/White/Red deck are almost unstoppable."

In the top 8, Pollock's first matchup is the often aggravating Counter-Rebel Mirror Match against Benny Wong. Wong's deck is similar to Pollock's in many ways, but includes black mana to cast the Tsabo's Decree from the sideboard. Pollock expressed positive sentiments anyway.

"It's exciting. We have a chance at being one of the best teams at Worlds. I'm just hoping to be on it."