Brian Kibler had plenty of fun in Chicago where he made the top 8 with Rith, the Awakener and Armadillo Cloaks in his deck. Now, the 20-year-old player from Derry, New Hampshire has done it again. He doesn't play any dragons in his main deck, but once he's done with the first match: Enter the dragon. Or the dragons. Dromar, the Banisher, Treva, the Renewer and good old Rith, the Awakener are all in his sideboard, just waiting to get in to kill something or someone by breathing their lethal fire.

Dubbed by Randy Buehler as the Dragon Lord, Brian Kibler is back, smashing people with his army of dragons. "I really have no particular affinity for dragons. It's fun to beat people down, but the reason why I play them is that I think they're really good in the format," Kibler reveals.

In Chicago, Brian was Red/Green beats (without Fires of Yavimaya). This time, he has left the Fires at home, going for a five-colored deck based around Collective Restraint. "The design is based on at deck that Huey, Linde and myself were testing for a while, we were working on the version pretty much up to the last minute," Kibler explains. He has just finished a feature match, losing to a Japanese player after triple mulliganing in the third and deciding game. The 20-year-old is well-known for wearing bright shirts, and today was no exception, this time his shirt has about almost as many colors as his deck.

Kibler goes on telling about the making of his deck. Basically, he was trying to find a version that would beat the other decks of the format, but he hadn't really succeeded until he wrote up a version that played Questing Phelddagrifs as he main win condition. "Suddenly I started not losing to black/red and green/red," he smiles. Then, they added Fertile Grounds, Star Compasses and Harrows to the deck in order to accelerate the mana and also to get the correct colored mana. 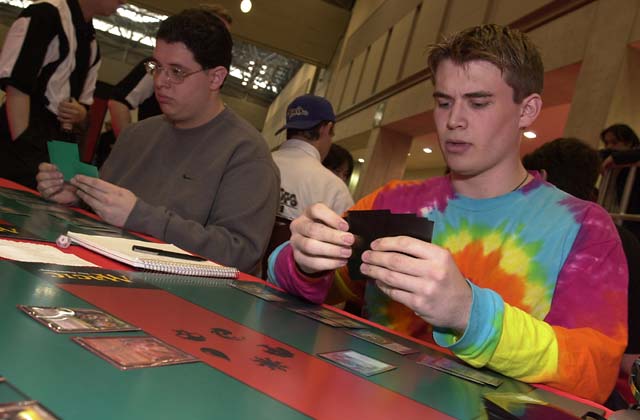 Brian's Chicago deck was dubbed "The Red Zone" after the red field of the playing mats at the Feature Match tables. His new creation is called "Vision Quest," partly after Questing Phelddagrif and partly after the wrestling movie of the same name. The movie was an important part of Brian's preparation for the Pro Tour. He watched the movie on his laptop before going to Tokyo, he watched it on the plane to Tokyo and he even watched it after he got to Tokyo. In addition, he has the soundtrack on his laptop, too. And Brian enjoys the deck as well as the movie. Five rounds into the tournament he had a 4-1 record, on a steady course for making day two.

"I love this deck. It's incredibly fun to play, and it seems well suited to this particular metagame," he says. Against decks with damage-based removal, the dragons are remarkably good. "Damage based removal doesn't get rid of 6/6s, as Chicago showed," Kibler grins. He even runs another legend in his sideboard; Ertai, the Corrupted. "It's good with Ordered Migration and Fertile Ground, and it can even sac itself."

As always, Brian went into the tournament with high expectations. "I'd be very happy to win the tournament, but I won't jinx myself by saying I'm going to win. I expected to do well, I think my deck is really good. I'd like another Top 8. From the decks I've seen, my deck is one of the better. The metagame seems to be that green/red beats control that seems to beat black/red. The domain decks, at least the version I'm playing, seem to be outside of that rock, paper, scissors environment. So I have a good chance against the others," he thinks.

Still, the deck has some bad matchups. "Base blue is a hard matchup, but after sideboarding I tend to win. Not when I triple mulligan though," Brian laughs, referring to his previous match. He believes that he has made the right deck choice, at least. Says Brian: "I'll quote Mike Bregoli, who was not able to come because of school: It seems a lot like Paris, and Restraint seems like the Bloom of the format.