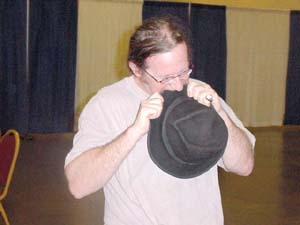 Pro Tour dinosaur Eric Taylor is a man who honors his bets.

He vowed with absolute certainty on channel #mtgwacky, just before Pro Tour New Orleans, that Kai Budde would have no chance to win that Pro Tour. He went so far as to guarantee Kai couldn't emerge victorious again, promising to eat his hat should he be proven wrong.

Flash forward to Pro Tour San Diego. During the semi-final round of the Pro Tour, Eric entered the edge of the casual play area, wearing a stylish black fedora with a rim, his hair pulled back in a neat ponytail. He carried a bulging bag by his side, and marched straight to the table filled with determination. 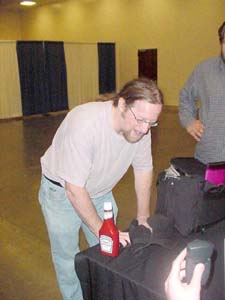 By now a sizeable crowd had gathered to watch the spectacle. EDT began by biting into the rim, but couldn't tear the material with his teeth. In a quick burst of speed, he reached into his bag, and pulled out a full bottle of Heinz Ketchup and a pair of scissors. Deftly slicing a swatch of material from the top of the hat, he masticated on the felt but found the taste to be offensive.

"This is terrible!", he exclaimed, unleashing a destructive stream of ketchup all over the table and his headwear. He resumed devouring his hat, making chewing faces akin to Popeye the Sailor eating rotten spinach.

More people gathered around, and one felt the need to ask, "Are you going to eat the whole hat?". "Until I choke" was the answer.

Around the third mouthful, New Orleans Pro Tour Finalist Tomi Walamies happened to chance by the spectacle. Upon realizing what was going on, he came over to console the poor bet-loser. Walamies simply shrugged, and deadpanned, "Sorry, he drew the Morphling." 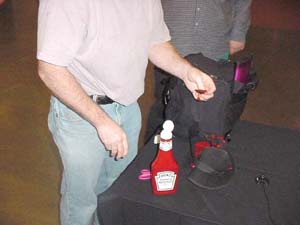 Around the third mouthful, EDT began to wish he had a nacho hat. "This is terrible", he screamed, banging his jaw against the table to force the hat down. This attracted the attention of Rob Dougherty, from the Boston. "You're crazy!", he admonished in the typical Your Move Games tone. Eric just shook his head, gritted his teeth, and said, "I have to do this."

The fourth helping of hat brought Taylor to his knees. He pounded mightily, and made faces akin to that of a man who had to lick the rim of a public toilet. In one fell swoop, he popped off the top of his bottle of ketchup, and began to chug the tomato product, hoping to wash down his meal.

Looking like a cat about to spew out a very nasty hairball, Eric threw in the towel. "All right, that's enough", and made his way to the trash can.

Ironically, Pro Tour favorite Kai Budde finally was dragged to the event, just as it was ending. "Oh man, I can't believe I missed it, I was sitting right over there (at the pro tour spectator area)." Eric shrugged, choking back a stomach full of things that were not meant to be digested. :"Well, was it very tasty?", Budde questioned.