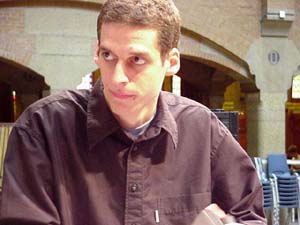 They are both not having an easy day, despite being in the finals. To get here Haim had to kick out two countrymen, and friends. First he defeated Olivier Ruel in the last round yesterday for a spot in today's Elite Eight and today he defeated Amiel Tenenbaum in the quarterfinals.

David didn't have to defeat any German but he was one of the many disappointed Germans watching the World Cup finals today. He also seemed to be the only person at the Top 8 tables who can wear black clothes and not even break a sweat under the TV lights. This is, at least, very strange.

Things started of shaky for Haim who had to take a mulligan, apparently a common occurrence for David's opponents. He still tried to come out fast with Aquamoeba but Brucker had the Force Spike.

To make sure he had the Force Spike available David had to play a first turn Island but was forced to play a Salt Marsh on the second turn. This meant he could do nothing to stop Wild Mongrel.

Having a Madness outlet meant Christophe could now move the crucial plays to the end of the German's turn changing the normal roles of Control and Beatdown decks. When Brucker Repulsed the hound Haim upgraded his strike force to Arrogant Wurm.

As he reached five Brucker sought help: kicked Probe. He lost Force Spike and a land while Haim lost Violent Eruption and a land. The Wurm brought David to twelve and the Mongrel returned.

At six mana the calm German dropped Psychatog and tried Chainer's Edict. Two Circular Logics later the French sacrificed his Mongrel. On his turn he used Fire/Ice to get the Psychatog out of the way and sent the Wurm in before playing Aquamoeba.

Now at eight David Brucker needed to get a complete hold of the game. His Psychatog, and four cards in hand, were a big help but he needed to make sure he wouldn't let his life totals slip too much.

He flashbacked his Edict, again tapping out, getting rid of Aquamoeba. Grasping this opportunity Haim topdecked Merfolk Looter and played it. With the Looter helping out Christophe set about reconstructing his hand.

Using David's end of turn he first tried Violent Eruption. The German considered the situation and countered it. On the following turn he tried a second Looter and again the German used a Counterspell.

Brucker used Coliseum to improve his hand and tried Chainer's Edict. The Frenchman answered with a second Arrogant Wurm through the Looter, which Brucker lapsed. Jokingly the German tried to point the Edict at Looter but Haim wasn't tricked: he sacrificed his Wurm.

Free of the Wurm's threat the Psychatog finally started swinging. When Haim redrew the Arrogant Wurm David Lapsed it. Despite having his second Logic in hand Christophe allowed the Wurm to return to the top of his deck once again.

With the German's graveyard overflowing Haim was forced to tap it with Fire/Ice in Burcker's upkeep to avoid a potential lethal combat phase. Brucker flashbacked his second Edict getting the Looter and passed the turn with a single Island untapped.

Christophe Haim did the math and figure he somehow couldn't take advantage of that. He passed the turn and the, for now nibbling, Psychatog brought him down to thirteen. The Frenchman played Looter and on the next turn thought long and hard about whether he needed to chump or not.

Under the blazing hot spotlights of the finals, with quite a large crowd watching, uttered the now famous "no blocks" line. Brucker tried the game-ending Fact or Fiction but Haim had Circular Logic to save himself.

To slow the Psychatog down the Frenchman played Flametongue Kavu. Obviously Brucker didn't mind removing six cards from his graveyard instead of spending a counter, if he had any.

The now smiling German tapped out in his turn and played a six-mana Blue spell: Upheaval. He floated enough mana to drop Psychatog on the same turn. Like in some many other similar situations the game ended on the following turn when the opposing player conceded.

Again David's "voodoo" shuffle paid off and Haim was forced to mulligan. The Frenchman still came out strong with a second turn Looter. The Blue creature set to work at once dropping Roar of the Wurm into the graveyard on the following turn.

When Haim tried a Aquamoeba Brucker had the Counterspell, and with a card already in his graveyard, Ghastly Demise was ready to take out Looter. Christophe needed help so he tapped out to give Deep Analysis a try. After thinking for a few seconds Brucker allowed it.

He even allowed the flashback and a Looter to resolve on the following turn. He untapped and played Psychatog giving Haim something to think about for a change. The Frenchman tried to hurt it with Flametongue Kavu and they got into a counter war. After a Counterspell and a Gainsay the red creature entered play. 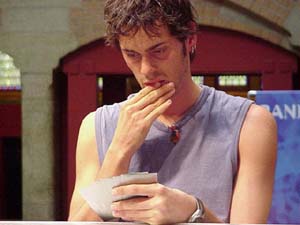 The German stared at his three-card hand for a long time. He needed to figure out if he could discard anything and remove his graveyard to save his creature. Finally he settled on discarding Upheaval.

The reason became apparent on the next turn when David Brucker played another Upheaval restarting the game. So they went back to playing lands with Haim dropping his Looter as soon as possible.

He tried Wild Mongrel but Brucker Lapsed it so he tried it again on the following turn. This time it resolved. When Haim's used his Looter David tried to Demise it in response but the Mongrel enabled the Frenchman to save his crucial searcher.

Out came another Mongrel as Christophe tried hard to apply as much pressure before Brucker could have time to regain control of the game. At twelve David tried Psychatog and two counters later got it to resolve.

That could break Haim's stride so he played a Flametongue Kavu to eat up graveyard cards. On the next turn the Frenchman finally found his second Blue source and could now cast two counters in the same turn if need be. With renewed trust he played a third Mongrel and got ready to swarm out the lonely Psychatog.

Again when the Frenchman tried to use his Looter the German blinked: Fact or Fiction. Through the Mongrels Haim fired off a super Force Spike we normally call Circular Logic, this time for thirteen. Two Logics later the Fact or Fiction got countered.

Now with Haim's hand empty the Looter resolved and he drew the perfect card: Roar straight to the graveyard. Facing a horde of creatures, and out of options, David conceded a few minutes later.

After much jiving with the cards Christophe Haim kept exactly the same sixty cards while the German added one Duress and one Engineered Plague taking out a third Memory Lapse and one Possessed Aven. 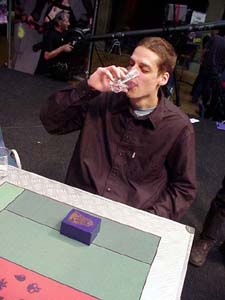 For the third consecutive game in these finals Brucker's touch forced Christophe to mulligan. His second hand wasn't great but after shaking his head he kept it. He had no second turn play and lost Gainsay to Brucker's third turn Duress (yes, the only one he sideboarded in). He did ask David to discard the Roar instead but the German only smiled.

His first play was Merfolk Looter that promptly suffered a Ghastly Demise on the following turn. Out came another one and David allowed it.

David (looking at his Duress notes): "Another Looter? That is not on my list."

This one died under Chainer's Edict. Still, Haim's path to victory is based on creatures so he kept pouring them out. The next was Aquamoeba, which actually stuck around for more than one turn.

Needing more lands—two Islands and one Mossfire Valley had already forced him to burn three times—Christophe Haim tried to flashback a discarded Analysis but the German played Logic.

Since his opponent was in trouble, David Brucker took a break from being ready to counter to tap out and milk four cards out his own Deep Analysis. This might have been a hasty move since Haim finally found a good play and dropped Arrogant Wurm into play.

Tired of having to worry about creatures Brucker played Psychatog on his following turn. Unfazed Christophe sent in the Wurm. Brucker discarded a card and reduced his graveyard to a single Edict to stop it and keep his creature.

When Haim tried to play another Arrogant Wurm Brucker made him pay for his bad mana draw with Force Spike. In came a second Aquamoeba and despite being at eleven and having a Psychatog in play David Brucker took several minutes to figure out his next turn.

Finally it became clear: he was setting up the mana for Upheaval. Since Christophe didn't find a miraculous answer at the top of his deck the game ended on the following Psychatog swing.

Again Christophe messed around with his sideboard but kept the same configuration while the German retouched his deck once again, taking the Duress to bring back Memory Lapse.

This time Haim survived the mulligan curse but once again his second turn Looter met a Memory Lapse. His turn three Aquamoeba met a similar faith (this time a Counterspell) but the following Mongrel survived.

Well, at least in entered play because on the following turn Brucker had the Chainer's Edict to take it. Keeping up with the butchery Brucker allowed Nantuko Blightcutter to resolve only to take it out with another Chainer's Edict.

Through it all Christophe Haim kept his cool. He finally got Aquamoeba to stick around and even resolved Merfolk Looter. On his six turn he entered the Red Zone for the first time. 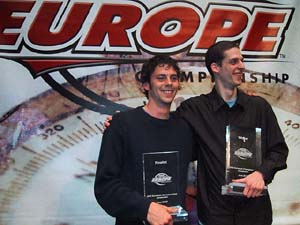 It didn't end well because Brucker had Ghastly Demise and on the following turn flashbacked Chainer's Edict to take out the remaining creature. Despite having his opponent tapped out Haim could do nothing to capitalize on it. He simply played a land and passed the turn.

In came Psychatog and Haim played Flametongue Kavu and Merfolk Looter to slow it down. Another Demise took out the Looter and the second Edict got flashbacked. Despite having a single card in his graveyard Brucker had the game totally under control.

Christophe drew, and played, Arrogant Wurm but David got the crowd whispering with a brutal Fact or Fiction (the first in these Finals). After a few minutes of thinking these were the piles.

The German took the bigger pile. On the following turn he played a second Fact or Fiction.

Pile one: Counterspell and two lands.
Pile two: Deep Analysis and one land.

Again he took the bigger pile. In went the Psychatog and when Haim said "no blocks" David Brucker's eyebrows rose an inch. He checked the life totals and smiled as he figured he had them mixed up.

At the end of Haim's next turn he tried to Repulse the Wurm but the Frenchman had Gainsay. Despite having the game totally under control, Brucker took his time making sure he would make no mistakes, using the flashback on his two Deep Analysis to get enough cards to finish the game.

He used Ghastly Demise on Haim's Arrogant Wurm to clear the path and win the game. All this without breaking a sweat, even with his countrymen Kai Budde looking over his shoulder.