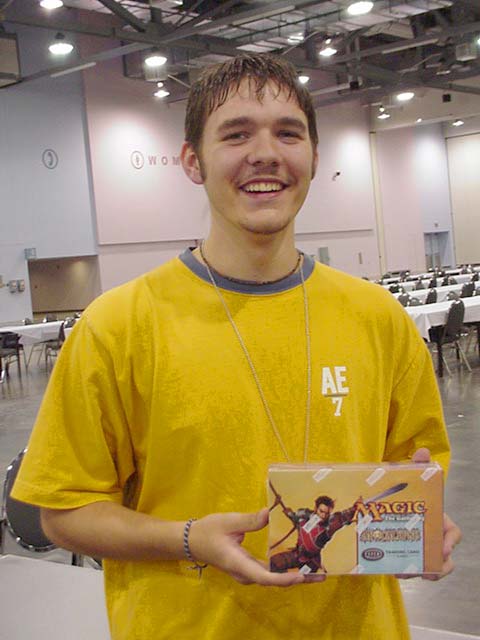 This was it. Months of anticipation and Internet buzz was all leading up to the first major tournament to use the groundbreaking post-Apocalypse format. However, this event was unlike most major tournament. The Amateur Championships is only open to players who have never earned a Pro Tour point. In a nutshell, the Magic community would be watching intently as Joe Average looked to break this new and exciting metagame.

When the dust settled, Tim Bonneville and his blue/black/red deck held the championship. The big difference here was that the red in Tim's deck allowed him to play spells which gave him a huge advantage in permission mirror matchups. The other decks were blue/black with white, which allows potent spells such as Wrath of God and Dismantling Blow to be used. While these cards are certainly excellent in many matchups, they are not incredible in a permission mirror match.

So, while his opponents had Wrath of God, Tim had Urza's Rage. While they sided in Millstone, he sided in Obliterate. This arsenal of game-shifting, uncounterable spells was enough to carry Tim to victory. His success could very well inspire other players to try out similar permission decks.

So what was learned at the end of the day? If nothing else, the 2001 Amateur Championships will be remembered as the day that permission decks took no prisoners and dominated the tournament. Seven of the Top 8 decks were permission based, with a black/white Arena deck filling in the last spot. What makes this really intriguing is that most of these decks used little to no Apocalypse cards, with the notable exception of Vindicate.

This might be misleading if taken out of context. Sure, the Top 8 wasn't heavy in cards from the new set, but that doesn't mean that the other competitors didn't try to use the power of Apocalypse. Plenty of Pernicious Deeds, Spiritmongers, Wild Researches and even some Goblin Legionnaires were played. When you consider that Apocalypse was involved, yet it didn't really have a presence in the Top 8, it's certainly enough to make the average player wonder exactly what is going on.

Even though Deeds and Spiritmongers were nowhere to be seen in the Top 8, Vindicates were plentiful in the black/blue/white control decks. It could be suggested that any deck that has easy access to black and white mana should run four copies of this card without question. After all, the efficiency of being able to destroy any card on the table with no strings attached is too good to ignore. However, it won't do anything about Blastoderm and Spiritmonger, and it is usually nothing more than a Stone Rain against control decks. It is still up in the air as to whether or not this card is really good enough to automatically play in any deck that can support it, regardless of strategy.

Another story of the tournament was Team TOGIT's use of an innovative Death Pit Offering deck. Reminiscent of a long forgotten Masques Block Constructed deck from last year, this creation uses the powerful black enchantment in conjunction with Saproling Burst, Chimeric Idol and Nether Spirit to deal massive amounts of damage. The additions Apocalypse provides are Pernicious Deed and Life/Death. The Life option of the card is absolutely unfair when used with Death Pit Offering, as it gives the player an army of 3/3 angry lands for only one mana.

The team did not place in the Top 8 today, but it would have been a nice follow-up to their second place finish in the Sideboard Team Challenge on Thursday. Alas, a Team TOGIT sweep was not to be, but their accomplishments this week will probably put them on the map.