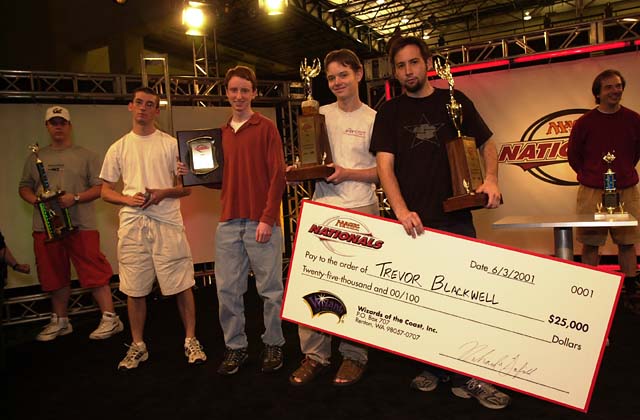 US Nationals has been a coming out party for many players. Justin Gary was the unknown who became a champion, and he landed on Your Move Games. Matt Linde beat Mike Long in the final in 1998 and became an instant folk hero en route to finishing fourth at the next year's World Championships. Aaron Forsythe was the CMU hanger on who went on to become one of the best teams players in the World, winning the World Championships teams tournament and coming second at PTNY. It can't be disputed that US Nats is the birthing grounds for legends, but this year, despite Brian Hegstad surprising everyone with a second place finish and Eugene Harvey grinding all the way to the national team, it isn't a player for who this tournament will be remembered.

Collin Jackson started judging at the WotC game center in 1997 at the age of fourteen when he earned his level one judge stripes. For the last four years, Collin has been moving through the judge ranks, earning the respect of such notables as Andrew Finch, Jason Carl and Jeff Donais. This weekend, with Zantides forced to go back to his native Australia to await his final visa approval, Jackson was thrust into the red and black striped shirt he wore a year ago, taking with it the responsibilities that come with being a head judge. What ensued will be remembered for years to come.

US Nationals will be remembered as the tournament where Sheriff Jackson rode on into the streets of sanctioned play, guns a-blazin', sending cheaters into the wilderness to be eaten alive. First, it was Chris Benafel, repeatedly warned about his slow play, who was handed a game loss by his long friend Jackson. Then it was Pete Leiher, whose slow play forced Jackson to change the warning penalty he'd received for misrepresentation of a card into a game loss penalty. Then, in the top 8, it was Casey McCarrel who felt Sheriff Jackson's long arm, getting disqualified for stacking his opponent's deck. Colin Jackson's brand of law is here. Evildoers beware. There's a new sheriff in town.

With the Jackson story being so pronounced, it would be easy to overlook everything else that went down in Orlando this weekend. Trevor Blackwell established himself as one of Magic's true stars, becoming one of only three players to win both a Pro Tour and US Nationals. Hegstad emerged from the shadow of his AlphaBetaUnlimited.com teammates. Harvey continues the legacy of CMU's success at US Nationals. David Bachmann, virtually retired for three years came back to qualify himself for World Championships by finishing fourth, but its Jackson who will be remembered. 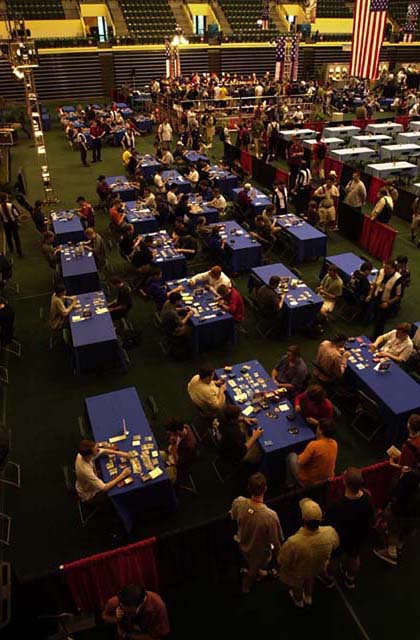 As far as actual play goes, a number of interesting stories came out of this year's Nats. Mike Turian, 5-1 in the Limited portion each of the last two years, finally managed to avoid a loss, starting 6-0 before an unfortunate 2-4 day two. Bachmann, brought his Bridge-Wildfire deck to the tournament from way outside the existing metagame and played it all the way to World Championships. Dan Clegg's Saproling Burt, a variation of the Orbosition decks that has dominated of late made its premier level debut, while Yavimaya Barbarian became one of the most used 2/2 creatures in one tournament in recent history.

Jackson's next head judging assignment takes place at Latin American Championships after a brief stint in Malaysia where, he'll be helping out at the APAC Championships. The 18-year-old Yale student isn't working full time at WotC right now thanks to his scholarly duties, but he'll be working out of the WotC offices in Renton, Washington this summer.

Next up for the US team of Blackwell, Hegstad and Harvey is World Championships in Toronto, where the United States's three-year championship streak is on the line. With members of AlphaBetaUnlimited.com, CMU and the San Francisco crew now united for one tournament, it will be interesting to see whether the three can work together or, like last year's edition, rely on the pure power of the United States juggernaut to pull them through to the final, and victory.

Regardless of the decision the US muchachos make, this tournament may be signaling the beginning of a new age where cheaters are caught red handed by a new breed of judge: one in a white hat riding in on a white horse. Thieves, crooks, hustlers and banditos beware: There's a new sheriff in town.