Grand Prix Kaohsiung was the first premiere event fought on the battlefield of Invasion/Planeshift Limited. Held on 44th floor of the illustrious Grand Formosa Kaohsiung Hotel, it drew 207 participants in search of glory, Pro Tour invitations, and a few bucks. Tobey Tamber defeated Tzu Ching Kuo in the all-Taiwan finals, earning himself $2400. Kuo earned $1700 for his strong showing. 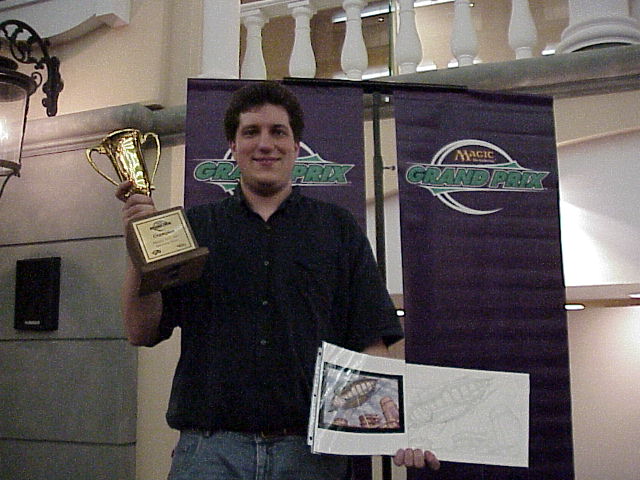 The finals were nailbiting in their excitement. In game one, Tamber managed to maneuver around the outrageous Planeswalker's Scorn. He forced Kuo to spend his turns gambling for creature kill instead of building his board position. Soon, Tamber had an empty hand and monsters on the table. They marched ahead for the kill. Game two was likewise electric. Tamber mulliganed down to five cards. His draws cooperated, and he was soon back in the game, safe behind a Vodalian Serpent. Kuo undid his progress with a pair of Magma Bursts. Tamber was forced to stall the ground with Plague Spitter, not an attractive prospect for a player at eight life. Nevertheless, he rode it to the wire. It went to his graveyard when he was at two. The one remaining life was all he needed to take the match.

Third place finisher King Yim Kingston Tong is happy with his $1200. The Hong Kong resident defeated well-known drafter Hon Ming Au Yeung in the Quarterfinals before losing to Tamber. Singaporean Nick Wong's fourth place is bittersweet. He feels that a number of mistakes cost him his seat in the finals. He plans to work hard to improve his game. Though Japan was well represented in the Top Eight by Toshiki Tsukamoto and Fumio Hoshino, both players lost their quarterfinal matches. Granger Petersen was in the same boat. He was very disappointed in his draft, and felt his loss to Tamber was an inevitability.

A trial for Grand Prix Yokohama was run on Sunday. The format was team sealed, and after several grueling rounds, Team Off Class (composed of players who missed Day Two of GP Kaohsiung) defeated Team Rebel to walk away with the byes.

The tournament's only negative moment came towards the end of round thirteen. Two top players, Chih Cheng Ho of Taiwan and Teddy Ng of Hong Kong were paired up. The longtime friends each needed a win to enter the Top Eight. Time was running short on the round, and it looked like a draw was inevitable. The two agreed that it would be best to flip a card to determine the winner of the match.

Head Judge Jackie Yang was notified. In accordance with the rules, he disqualified both players without prizes. He recognized that the players were motivated by friendship, but maintained that collusion is collusion, regardless of intent. He hopes that this unfortunate occurrence will serve to remind players of the severity of the issue.

Indeed, apart from that one event, fair play and sportsmanship ruled the tournament. There were few cries of "Judge!" and slow play warnings were at a minimum.