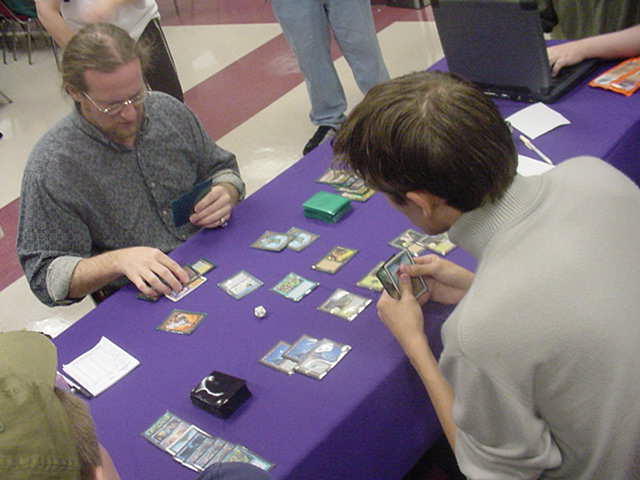 It was a wild one here in the Dairy and Beer Belt. The masses were clamoring for more Standard events, so when Magic Organized Play offered a Grand Prix in the format, people turned out in droves. Over 650 competitors filed in to the Four Points Sheraton in Milwaukee, Wisconsin to do battle with atogs, elephants, and goblin soldiers.

The top three decks were Psychatog, Trenches, and some sort of Blue/Green (often with red). But a few new rogue decks appeared, headlined by David Petersen's 4-color Braids.

Battle of Wits finally made a Top 8 appearance; Billy Jensen took the big deck to the top of he standings, but eventually fell to Neil Reeves and his three-color 'Tog. Will the Battle cause a reworking of the deck size and shuffling rules? Only time will tell.

The real story of the tournament was the final matchup of Pat Chapin and Eric Taylor, two long-time friends and playtest partners from Ann Arbor, Michigan. Somehow the two, piloting different decks, managed to fight throught the sea of competition to face each other in the finals. Taylor emerged on top, and finally has a title to his name after many years of trying.

The rest of the Top 8 was also big time, including Reeves, Jensen, Brian Kibler, and CMU's Mike Turian. The other two were Petersen and Canadian amateur Steve Cassell, who gets a nice big amateur check as well as an invite.

Because this tournament is a feeder for Pro Tour - Houston next season, the invitation list hasn't been created. Those hovering in the 9-16 slots will have to wait for good news later on.

All in all, the tournament was fantastic, and its aftershocks will be felt throughout the rest of the Championship season!