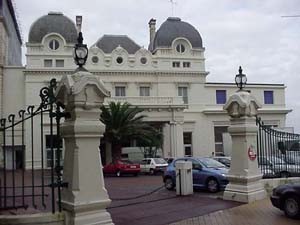 The insane WotC Europe site crew likes to listen to music while they pack up and clean the site. Right now someone is screaming "That's the way - aha aha - I like it - aha aha". I might be tired but I can't think of a better way to sum up this tournament in one sentence.

With a breathtaking view just outside our window to both small Biarritz's bays, we had sunshine on this last Grand Prix of the season. In fact we could see the surfers spending a lazy afternoon in the small waves.

Inside, things got underway with great enthusiasm of over five hundred players sitting in on the first day and a lot of public peeking at the drafts and the feature matches on the second day. The Top 8 had everything you tend to expect in Grand Prix: first time Top 8 players and the big names.

After the draft, most spectators expected Kai to win, both based on his renowned skill and a ridiculous deck. It worked great for him in the finals were he met Nicolas Labarre in the middle of the loud French crowd for a final showdown.

Although Kai's deck was considered the best on the table, Nicolas was the perfect foil for it. In three very, very exciting and polite games they delighted the crowd with their game and when Kai extended his hand with a smile, Nicolas wasn't the only one enjoying the moment.

It was a great tournament, in a great location with a great card and, hopefully for a permanent change, no one got even close to getting disqualified. A French won in his country and a lot of players left with new stories to tell and some with a qualification for San Diego where they can continue to discover the Odyssey Block Limited format.