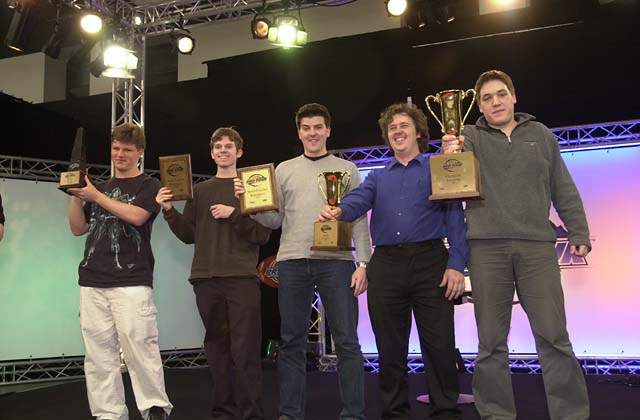 Masters Champion and the Top 4 of the Pro Tour

The professionals agree: Invasion Block is one of the most balanced Limited formats of all time. They descended on Barcelona to back up the talk of their game with cold, hard facts. Some had their bubbles burst; some demonstrated their talent, and all of it in pursuit of the title.

The first day's biggest story was an interesting bit of metagaming. A concept usually associated with Constructed formats, it applies in Limited as well. If you know that many people believe the same colors to be strong, then you can go to the "weak" combination and expect stronger late picks. A number of shrewd pros put this theory into practice, going for white-green, a combination abandoned by most because a table can have trouble supporting even two white-green drafters.

Many of these did quite well, including Kai Budde, who used it to sweep his first table. Seeing this success, many more players employed this strategy on Day 2. The extra drafters left them with weak decks. Budde noticeably avoided green-white in his Day 2 drafts.

When the dust settled on second day, the Top 8 was composed of Kai Budde, Patrick Mello, Albertus Law, Dan Clegg, Yuri Kolomeyko, Brad Swan, Chad Ellis an Alan Comer. Significantly, Kolomeyko and Law were the first Ukranian and Singaporean, respectively, to make the Top 8 of a Pro Tour, and five of the competitors enjoyed their first Top 8.

The round of eight was a slaughter. The top four, Budde, Clegg, Comer and Mello, made short work of their opponents. All four matches were three-game sweeps. The semifinals were much more interesting, featuring Budde defeating his roommate Mello, and Comer battling back from a 0-2 deficit to take the match.

The finals saw Budde avoid the dangers of Comer's giant men (he had Verdeloth, Molimo and Nemata!) to win the whole show. This victory gives him a healthy lead on the Player of the Year race, as well as making him the first player to have won three Pro Tours, and the first to win two in one season. And the first to win three on three different continents, for that matter.

There was plenty of action at the opposite end of the spectrum. Matt Vienneau's Invasion Block Limited hot streak came to an abrupt halt this weekend. Despite bumbling his way to two Grand Prix titles, he was still a heavy favorite to do well at Barcelona. He failed to live up to the hype, exiting Day 1 with only three match wins. He apologizes to those who chose him for the Fantasy Pro Tour. 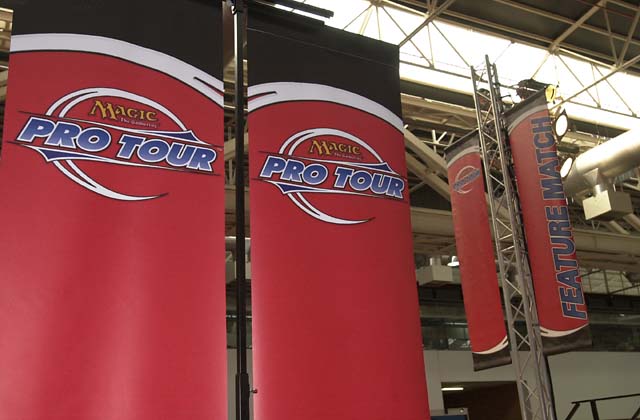 Nor was he the only upset finish. Sideboard Online Limited specialist Gary Wise made Day 2, but got blown out of the water, finishing one-hundred-forty-eighth. Neither Zvi Mowshowitz nor Tsuyoshi Fujita, the finalists of Pro Tour Tokyo, made Day 2.

The tournament itself was run with a minimum of fuss, but was not without a complication. Xavir Petit of France was disqualified for misrepresenting information to a judge during a rules dispute. His was the only major offense, with little other than warnings required to maintain order.

Also heartening were the strong finishes of a number of the Tour's brightest stars. Naturally, Jon Finkel won his last round to finish eleventh, but he's lost the monopoly on consistency. He was followed by Kamiel Cornelissen at twelfth. The Dutch Dynamo's average finish in five lifetime Pro Tours is eleventh. Grand Prix Florence-Champion Benedikt Klauser followed up his third place at Los Angeles with a fifteenth place at Barcelona.

Add that to Budde's record-breaking performance and it seems less like they're the new Finkels, and more like he's being given a run for his money. It's a good thing he's earned so much of it.