It's happened to all of us at least once. An important early-morning appointment, or maybe a train to catch at 7:00 a.m., and then through bleary sleep-shrouded eyes the angry red of the alarm clock telling you that this is one engagement you've already missed. Not everyone does it with a chance at $60,000 on the line, though.

Such was the fate of Jordan Berkowitz, Gabe Walls, and Mike Hron, left snoring as the first draft of Day 2 got underway.

Now you're probably thinking, young guys, up all night partying, playing cards and drinking. Generally up to no good and paying the price. Not true! All three were sleeping soundly by ten o'clock, exhausted from earning their 5-1 performance and eager to put their best foot forward in the second day of competition. 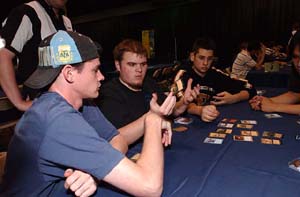 Two wake-up calls and an alarm were set the night before. Sharing their room were Rich Frangiosa (described by Mike Flores as "more dependable than Walls's alarm clock") and Gregg Weiss, the man who phoned Berkowitz in Venice from the U.S. the night before the Pro Tour and told him "Look, I've tested Wirewood Elf in your Beasts deck, and you have to play it," a change that propelled Berkowitz to the public eye. Weiss and Frangiosa were teaming with Matt Urban for this Tour, riding their rating from Pro Tour - D.C. a while back. They didn't fare as well as Two on Three. Frangiosa didn't come back to the room all night.

Their morning started with Hron mistaking seven o'clock for eight. He woke everyone up before the error was discovered, a move that made him few friends. The disgruntled crew rolled over for their extra hour.

Much worse. Not only did the calls go through, but as the hour of the draft approached, more and more pros frantically called the room to get through to the players. They even had someone pounding on the door.

They rallied as best they could, but managed only a 3-2 on the day, just a win short of Top 4. Their tenth-place finish is no small accomplishment. Expect them to be back next year.