Maher Oath is a deck originally designed by Dr. Ped Bun, but which only gained credence when The Great One piloted it to two consecutive premiere-event victories.

1 Shard Phoenix 1 Morphling 4 Force of Will

1 Morphling 4 Force of Will 1 Misdirection

The differences are very interesting, and only a few of them have anything to do with the presence of new cards. Obviously certain cards, such as Arcane Laboratory, are present (now or then) because of the element of combo decks in the metagame. The crucial differences are the questions that needed to be answered by this deck, those that the decks it expects to face pose, and the cast of cards played or absent from the maindeck were:

-1 Null Rod: In an environment without Tinker or even very much use of Artifacts at all, besides the occasional Cursed Scroll, Powder Keg, or Nevinyrral's Disk, Null Rod is not a card that is needed at the moment, and its failure to be included in either the maindeck or sideboard reflects that opinion.

-1 Aura of Silence, +1 Seal of Cleansing: It was the Tutor-able Disenchant effect that was the important part, rather than the two extra mana required to play an Artifact or Enchantment, as nice as that was. Also, Seal of Cleansing is a full colored mana less expensive, so the tradeoff of losing the ability is by far worth it.

-1 Abundance, +1 Overgrown Estate: These cards do not look terribly equivalent, but both are able to be abused with Sylvan Library. Unless you are looking for a specific card, such as a Wasteland, Abundance is not going to be put to too much use outside of its lockdown combo with Sylvan Library, while Overgrown Estate is also excellent versus the red burnout decks and their ilk in addition to allowing you to keep using Sylvan Library to draw better cards than your opponent. In effect the Estate allows you to cycle all lands drawn from the Sylvan Library, at a slightly depreciated rate, and in addition to that particular combo it also makes its controller particularly hard to kill via damage. If adding the Black to the mana base can be made to work, the Estate will be worth it in many matchups, while the Abundance will be fine in the sideboard more often than not.

-1 Trade Routes: If you are not expecting too much of an Oath of Druids metagame, the Trade Routes will not be too important, as it is very good in control matchups but only really needed (or an effect like it, such as the Sacred Ground in the sideboard) in the true mirror matchup or versus Turbo-Land with Obliterate, in which case the Sacred Ground is superior anyway. With no real dedicated land destruction decks, its general importance is of a lesser value, given that the first two things are likewise not terribly expected anyway.

-1 Disrupt: When Bob played the deck at PT-Chicago, Disrupt was an incredible card in the metagame, seeing as the metagame was full of Necropotence decks that tended to tap out very aggressively, and tight-on-the-mana control decks, against whom a resolved Disrupt could be quite brutal. Often enough a Counterspell despite its highly situational nature, it was never bad, but today everyone was talking about Sligh, Stompy, White Weenie and Secret Force as the more popular deck choices, with fewer control decks overall. As above, a call that needed to be made, though I suspect that Bob has probably been playing without the Disrupt for a while now.

+1 Oath of Druids: Like I said, with the stress on creatures that was expected on the day, it seemed quite reasonable to play another copy of the best card in the deck. Nothing more needs to be said about Oath of Druids that hasn't been said already. 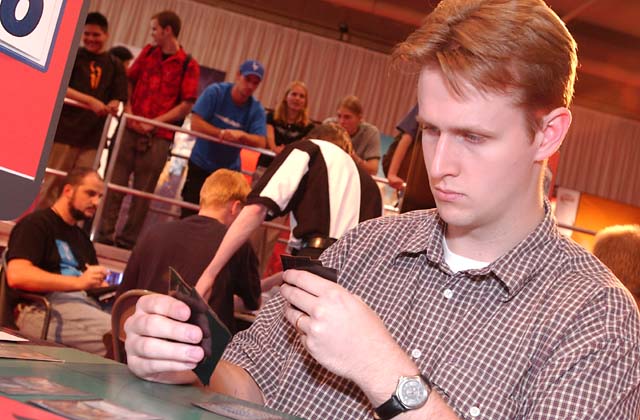 -1 Reflecting Pool, -1 Faerie Conclave, +2 Underground Sea: Needed to cast the Overgrown Estate and Pernicious Deed (after sideboarding), and for the most part neither of those two will be missed, while two copies of Underground Sea feels more like six on demand.

And, perhaps most importantly, -1 Shard Phoenix, +1 Crater Hellion. For a long time Spike Weaver was the card of choice in this slot, but the difference between Crater Hellion and Spike Weaver is their speed at which they function. Crater Hellion kills everything your opponent is likely to have in play to that point, making sure that there is very little the opponent can do to give you an immediate threat to your position, such as an untimely and embarrassing Incinerate or Swords to Plowshares.

The sideboard is completely different, but includes fifteen cards sculpted to face the metagame expected in the room today. Of the cards that were not in the sideboard before, their purpose was:

Abundance - Anti-control card that is accepted as a necessity at dominating the game, a must-be-dealt-with card-quality (and with Sylvan Library, card quantity) advantage machine. Moved from the main deck to the sideboard.

Spike Weaver - Replacing the Crater Hellion that had been moved to the main deck; it is often still correct, so it is best to be able to toggle between the two.

Pernicious Deed - A wonderfully powerful enchantment, this makes it in because of its ability to wipe clear many threats much faster than Powder Keg could, and also can be used to tactfully swipe away artifacts and even enchantments on command.

Arcane Laboratory - Die, combo deck, die. Any combo that gets started, certainly can't be protected with Arcane Lab in play. It's just that simple, especially given rumors that there might be both Donate and Pebbles decks in the room.... and there were.

Misdirection - A spare Force of Will versus control, no more, no less.

Pyroblast - Replacing the Mana Shorts from previously, this is due to a change in the opinion of how this deck needs to (or can) act against the control decks in the field, and respects the fact that this deck has come a great length into its own right as a control deck, rather than a semi-controllish deck with combo elements (the Oaths) that needed to be protected or worth using Mana Short to set up for.

It's not about the hype, with this deck, despite its long career: it's about precision design and precise gameplay, a killer combination in the hands of a player truly adept with the deck, which is The Great One, Bob Maher, Jr. to a 'T'.