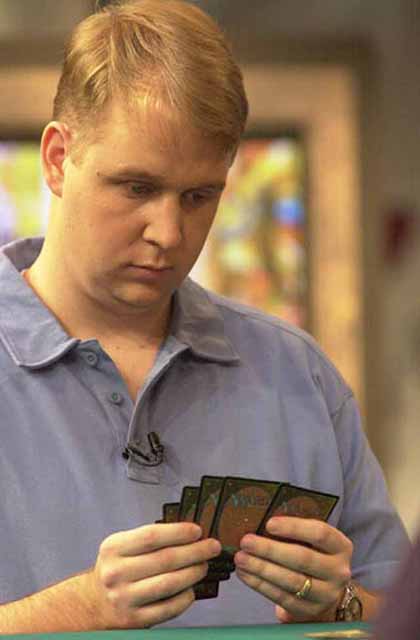 First, there was Urza's Saga, and the combo was good. Then Wizards took all our toys away, and we had to find new ones... out of the rubble left behind when the crackdown on combo took out Academy, Earthcraft, and a lot of other repeated offenders, there came first Necro-Pebbles and then its nastier older brother, Necro-Donate. Again the bannings came, and while those decks got to keep their Necropotence-led search engines, their abusively fast mana cards got the axe. Even without those, the decks still weren't terribly fair, so earlier this year The Skull itself got the axe... Necropotence would never pester a tournament environment again. But did the combos die?

Scott Johns, a member of Team Godzilla, is playing a deck entitled "Trick," which is effectively a retooling of the Illusions/Donate combo deck that was posted to The Sideboard last week by Mike Krzywicki. Some parts of the combo died, and other parts were recognized for their merit and kept around to try. Several members of Team Godzilla are playing this deck today, including Kai Budde and Patrick Mello, but without a doubt it is Godzilla's "fifty-ninth and sixtieth card deck tuner" that helped shape this deck into the exact list the team is playing today, even with the collaborative effort put out by the team. Scott chose to play the following deck in the third day of Worlds competition:

4 Force of Will 1 Misdirection 2 Morphling
49 Cards

The life or death of this particular combo deck is based on its ability to spend the early turns setting its win condition up, using the monoblue Tutor spells Intuition and Merchant Scroll in addition to the general card-drawing power available to the color. There are several key cards here, as initially posited by Mr. Krzywicki, and they lend both speed and stability to the combo as well as allowing for silver-bullet solutions in addition to its normal setup.

Sapphire Medallion - All the good artifact mana is gone, unless you plan on using Grim Monolith for the win, and Sapphire Medallion is as good at its mana-acceleration job as the Monolith without being as unwieldy. Sapphire Medallion, to state the obvious, reduces the cost of all the spells in this deck by one colorless mana, making the important combo cards available to be played on the third and fourth turn off of a perfect goldfish draw, but also making all the small-use effects happen at an overwhelming speed. With a second-turn Medallion, up to three separate card-draw effects can be played on the third turn, an eclectic mix such as an Impulse, Accumulate Knowledge, and Merchant Scroll. Considering that it doesn't do any worse of a job at accelerating the important stuff, it's fairly obvious that the Sapphire Medallion is the elegant mana producer that makes the rest of the deck gel.

Merchant Scroll - And you thought there were no good cards in Homelands! Merchant Scroll is a very affordable 1U to cast, and for that cost Demonic Tutors for a certain class of cards. Blue instants, while admittedly a narrow thing to search for, are still something you can definitely shape a deck around. The rest of the deck is designed around the Scroll, what with the Intuitions (which can get Illusions) and the lone Mystical Tutor (which can get Donate), not to mention the cards that are there simply to Tutor for. More on those later, for that is what is really interesting about the decklist... its differences from the list offered up by Mr. Krzywicki.

Illusions of Grandeur - Gain 20 life. Win the game before you become unable to pay the upkeep, or you will lose 20 life and likely the game, if you needed the life in the first place. Not the important or even the interesting card of the two-card combo that has been the center of Extended ever since Grand Prix-Seattle, because it is not the card that breaks the template of the rest of the cards available. That card, instead, is...

Donate - Select a permanent you do not wish to control, and a player you think should control it in your stead. Combined with Illusions of Grandeur, it is instead your opponent who loses the 20 life initially gained by the Illusions. Combined with other cards, such as Forbidden Crypt, you can see that this ridiculous, laughable card can do some very interesting things when it comes to permanents you never really wanted to control anyway. This is the unbalancing card, as it takes cards that previously had thoroughly balancing downsides and puts that fault to good use.

Force of Will - Everyone's least-favorite and most-favorite Alliances card, all at the same time. Countermagic shouldn't be free, but here you go, at a surprisingly affordable cost. The card disadvantage is irrelevant if you have a permanent so important that the loss is easily worth it simply because you have protected that which wins you the game, which is perhaps one of the aspects that had been putting modern combo decks a little bit over the top.

There's a lot of good card-drawing effects, utilizing both Impulse's deep-digging effect and Accumulate Knowledge's ability to overpower the opponent when multiples have been cast, but combined with Merchant Scroll's ability to Tutor for the later (and more powerful) Accumulated Knowledges, it is the monoblue replacement of Necropotence, the drawing engine used to overpower opposing countermagic. However, filling out the rest of the deck and choosing the necessary answer cards that stop the cards that would otherwise stop the deck from succeeding at its goals is where the Merchant Scrolls truly shine, and what make this deck a respectable archetype rather than just another Illusions/Donate knock-off.

1 Rushing River - A catch-all solution in addition to a card able to force a spent Illusions out of play, Rushing River is the Blue version of Trix's Hoodwink/Firestorm/Contagion slots, removing Seal of Cleansing, Elvish Lyrist, and the Illusions of Grandeur your opponent has recently decided to own from play long enough for you to win the game.

1 Mana Short - A very subtle card, this is mainly here to force a counterspell war at the end of the turn of an opposing Blue mage, forcing them to either counter it or accept that their future counterspells will have to be pitch counterspells. On top of that strong use, it can serve as a backup Rushing River for all of the problems save Seal of Cleansing; unless the opponent has an untapped nonland source of Green mana, Elvish Lyrist will be nullified by the Mana Short, and in response to Illusions of Grandeur's cumulative upkeep going on the stack, Mana Short will deny the opponent of the ability to pay the upkeep, and hopefully the game will conclude with their loss of twenty life.

1 Thwart - A fifth Force of Will for the blue mages, it is sometimes the better Force of Will, thanks to the fact that it does not require another card in hand to use it. Given a turn's preparation and foreknowledge, Merchant Scroll can set you up to win the war over Illusions and Donate, which by the way is the only war this deck wants to care about winning... since after that, there are no more battles.

1 Brainstorm - Not intended to be here simply to Tutor for, this is instead the 60th card in Scott's deck, working well with the amount of shuffling in the deck, but not strictly superior to an Impulse or another Intuition... until you playtest, and playtest, and playtest, and find that one Brainstorm is what you want, instead of another one of either of those. And without a doubt, that is what Godzilla does, and that last card is often Scott Johns' specialty.

The sideboard is fairly self-explanatory, with the specialty countermagic used in specific matchups (Hydroblast, Disrupt) and the Green-hosing Hibernation. Ophidian and Morphling are the Blue versions of Trix's Negators; against control Ophidian is justifiably insane, and Morphling is considered to be the best creature in the format even in Type One.

All eyes will be on Team Godzilla to see how this particular deck works out for them...