Fans of the Menno 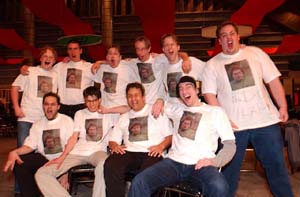 Very few Magic-players are popular enough to get their own fan clubs. In Nice, however, the "Menno D Fanclub" did their first public appearance to cheer on the Dutch player Menno Dolstra. The exclusive club, whose members include Magic profiles like Kai Budde, Gary Wise and Tom van de Logt, have even printed their own Menno D t-shirts. "I paid for a lifetime membership, and it came with a free t-shirt," Frank Karsten says, proudly displaying a special trophy: "I even got it signed by the Menno!"

The Menno D Fanclub started on IRC. Members of EFNet #mtgeurope founded the unofficial Menno D Fanclub a couple of years ago. Since then, the club has existed on the internet only, but since most of the members were qualified for 2002 Pro Tour Nice, they decided to get together and do something special. The result was a very special and very exclusive t-shirt, white, with a picture of the man himself, Menno Dolstra, on the front. "They took this cool picture of him in Amsterdam when he had a really bad hair day," Stan von der Velden says, and explains that Menno Dolstra has really interesting hair.

Only 25 copies were made of the t-shirt. While the online fan club consisted of perhaps 15 players, new members were recruited in Nice, and all the t-shirts were given away as people bought the limited amount of lifetime memberships. "When Menno heard about it, he refused to believe that we would make them, and when we had, he refused to see it. He saw them for the first time yesterday," von der Velden says. "He said he didn't like it, but I think he does."

Sideboard was able to get a very exclusive interview with Menno Dolstra. In the middle of an important team tournament, he was kind enough to take the time to comment on the fan club's existence. "It's a very nasty joke, and the picture isn't very flattering," he grins. "It is funny, but so very annoying. Especially the weeks before this, they kept telling me 'the great day is coming...' I can't believe they actually paid money for the t-shirt. It wasn't cheap!"

Frank Karsten reveals that his lifetime membership of the Menno D Fanclub cost him 15 Euros. But for him, the investment paid off. Not only did he get the t-shirt signed, he also got to play team up with his hero for the team tournament. The team name they chose was "Every day is a Menno D-day", paying tribute to Menno the Man.

"It has been a running joke on IRC, No one knows who started it, and it will be too much trouble to find out. I don't know if I want to know," Dolstra laughs. Eventually, he admits that he is flattered by having so many people look up to him. "I am flattered, but the picture is so very bad. It was taken at Grand Prix Amsterdam, and I hadn't been to the hairdresser in a very long time. Ever since that day, before Pro Tours, I get my hair shortened to a normal size," he admits.

Unfortunately, the fan club's support wasn't enough to get Menno Dolstra to the second day of 2002 Pro Tour Nice. Several fans kept his score on the t-shirt, and they were sad when they had to report that the hero dropped from the tournament after going 2-3. The fan club's next appearance will be at the Dutch Championships next week, and in spite of the weak performance in Nice, Frank Karsten has total faith in Menno the Man: "I am a bit disappointed. But he will make it eventually."