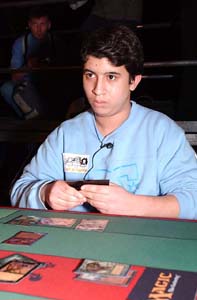 Of the 1,928 people who entered the San Diego Fantasy Pro Tour, only 14 picked the eventual winner, Farid Meraghni. Unsurprisingly, most of those who did were from France.

The winner, who gives his name as "payen," not only had Meraghni but also second-place finisher Jens Thoren, who appeared on 38 ballots. Also providing money was Jeff Fung, whose 17th-place finish brought payen's team total up to $53,000. The other players on the team were Katsuhiro Mori, Gabriel Nassif, Papp Gabor, Nicolas Labarre, and Alexandre Riviere.

In fourth place, Per Karrman took a six-person team all the way to the top, thanks to his canny choices of Jens Thoren and Don Gallitz. He also had Johan Sadeghpour, Anton Jonsson, Rickard Osterberg, Tim McKenna, and two empty slots.

Here's a list of the particpants in the Pro Tour, along with how many teams they appeared on and how much they won.