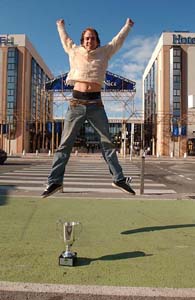 When Eivind Nitter of Norway defeated Bram Snepvangers to become the 2002 Pro Tour Nice Champion, he was probably wearing the most expensive outfit ever worn in a Pro Tour final. Nitter had shelled out 600 dollars for his Dolce and Gabbana Indian style pants and shirt, making him the Pro Tour's most fashionable champion. "Now I'm going to expand my clothes budget," the 23-year-old player grins after winning 30 000 dollars.

Eivind Nitter started his Magic career as an obnoxious punk from Dale, who had to travel for hours to get to the nearest city and play tournaments. He has come a long way since then. From being a Norwegian rebel who had no problem showing his middle finger to the photographer, he has developed into a player that has something that is quite rare in the Magic environment, he has his own distinct style. The change started when he moved to Oslo to study, where he got in touch with the best Norwegian players. Gaming with them took him to another level, which culminated in him becoming the 2001 European Champion.

Nitter took a year off school to concentrate on Magic. For a while, it didn't quite seem to pay off, and after quite a few bad Pro Tour performances, Eivind was relieved to get a good finish and happy for that finish to be a victory. "This was good for Norwegian Magic. It has been years since Norway had a top 8, and this was a good time for it to happen again – when we needed it the most, Nitter was about to fall off the gravy train," he says in his normal, laidback fashion, even referring to himself in the third person.

When he is asked the compulsory "how does it feel"-question that every champion is asked after winning, he actually quiets down, looking for the words to describe it. "It's okay I guess, f***ing good, I proved that I am not as bad as I perhaps thought I was," he says.

After making the top 8, he went straight to bed, exhausted after long days. Before the draft, he thought a little about colours, in fact he thought that the best thing would be to try and play blue and white. Then he opened a Beast Attack, and he chose to go green instead, thinking the others might want to fight for the blue. He ended up with a strong red and green deck that lacked a few two-drops, but there were simply very few of those in the draft.

"I was a little nervous when I sat down to play, especially since I won the first game and then I lost the second. When I had to mulligan in Game 3, things looked bad for me. It was a close game, but the margins worked for me. In the fourth game, he got a bad draw, and I ran over him," Nitter says about his quarterfinals against Gary Talim.

Having found the flow of the game, Nitter didn't lose faith even though he lost the first two games of his semifinals match against Svend Geertsen. "I was cool with it, I just felt that if I got a good draw, then I would win the matchup. Of course I was a little nervous that I could get another bad draw, but even if I lost I would still finish third." The finals were sort of anticlimactic after the tense semifinals. After winning Game 2 just as easily as the first game, Nitter knew it would go his way. In the end, he went for an overkill just for the fun of it, knowing that there was nothing in Snepvanger's deck that could stop him.

"I love being on the Pro Tour, and I'm looking forward to every single one," Nitter smiles, happily aware that his victory made sure that he won't fall off anytime soon. With 30 000 dollars coming to his bank account really soon, he is going to buy a computer and, surprise surprise, he is going shopping for clothes with a Swedish buddy, Micke Magnusson, who loves clothes just as much as he does. "I think Christian Dior will get most of his winnings," Micke says, while Eivind merely grins, grabbing his trophy to go celebrate his victory.