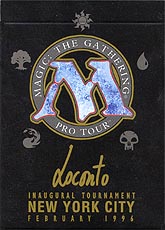 of the big stories here at PT-Honolulu is the Pro Tour celebrating its 10th anniversary. An incredible feat by any measure, it was all the way back in 1996 that the Magic: The Gathering Pro Tour completely revolutionized the gaming industry.

It all began at the Black Lotus Pro Tour in a snowed-in New York, but fortunately this winter we find ourselves dueling in the tropics. Just one of many things we've learned over the years: New York in winter, bad. Winter in the tropics, good.

By the end of this season, the Pro Tour will have stopped in 29 cities over 11 years, and that's without counting Magic Invitationals or World Championships! This giant map at the Pro Tour-Honolulu venue chronicles that entire journey.

But the most eye-catching feature at the event is this enormous collage picturing all of the Pro Tour champions crowned over the past ten years.

Despite that long stretch of time, many of the champions from that collage are here this weekend, participating in the event either as competitors or even employees of Wizards of the Coast.

This board (and the champions collage) just pictures Pro Tour champions, not World Champions, so there are actually two more champions here this weekend as well: Katsuhiro Mori and Julien Nuijten.