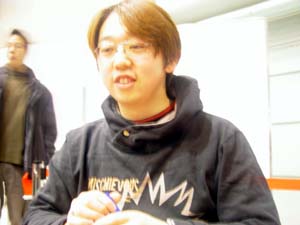 a doubt, the most impressive tech to come out of Grand Prix Okayama is Masami Ibamoto's Loop Junktion life combo deck. It can go off multiple ways, has lots of consistency due to its impressive tutoring capability, and has plenty of "silver bullet" cards to shut down whatever strategy is across the table. What's really impressive about the design is that you can tell a lot of effort went into it, as some otherwise obscure cards are in the deck to deal with specific situations that were either theorized or came up in testing. All that work definitely paid off, as four players ran it yesterday and three of them played today, with Akira Asahara running it in the Top 8. As the Quarterfinals were being played, I sat down and talked to Ibamoto to learn a little more about the deck of the tournament.

Sideboard: How did you think of the idea for the deck?

Ibamoto: The infinite life combo with the en-Kor, Task Force and Worthy Cause has been around for a while. But back then, it was like, "What do you do with your infinite life?" Then, Test of Endurance came out, and I decided that after the bannings, the new environment would be filled with decks that couldn't do anything about infinite life. It would be mostly creature decks, as opposed to combo. So, I thought it would be fun to build an infinite life deck and try it out at the tournament.

Sideboard: Something that's interesting is that the deck has a lot of ways to get the combo off now. It's not that you just need the en-Kor, Task Force and Worthy Cause. You've got multiple en-Kors, you've got the Spiritualist, you have Worthy Cause and the Sanctum. There are a lot of options.

Ibamoto: The increase in cards that allow you to sacrifice other things, or to search for them has definitely improved the deck and made it more reliable. Because, it's a three card combo with different ways of doing it, and there are eight tutors, eleven if you count Academy Rector. Plus, there's all the ways to sacrifice creatures and all the different creatures you can target to get the combo off. Effectively, I have fifteen of each of my key cards in the deck. So, it's easy to put everything together.

Sideboard: When I was watching you play, what was really cool to me was that you always seemed to have the answer to whatever your opponent did. Of course, that's because you have all these one-of's and the tutors to get them. How did you figure out which cards you'd need for those specific situations? It seems like a pretty difficult task because you've got tutoring in the maindeck and sideboard.

Ibamoto: I was tweaking the deck right up to the last minute, because as you said, it was difficult to think of which cards to put in. I was pretty confident about my chances against creature decks, basically you've got that locked down. Psychatog is a little rough, and Goblins can be fast and get the drop on you. The deck has the old Vampiric Tutor philosophy of four tutors and one of each card, but it was difficult to think of which ones to use. Analysis of the metagame was so essential. You have to think, "What decks will be out there?" and then, "What card breaks those decks in the most effective manner?" It was very difficult to come up with that.

Sideboard: Now that you've gone through the tournament, what changes would you make to the deck if you could do it over again?

Ibamoto: I didn't use Limited Resources at all. I thought it would be a good anti-Psychatog, anti-Upheaval card, but I ended up never using it. From that respect, having more Chokes would have been much better, or even four Seedtimes. I might go up to four Seedtimes, and I'm also thinking that I'd probably take out the Seedtimes and go up to four s. It's a better tool against other combo decks.

Sideboard: Do you think that this deck has the power to be a mainstay in the format from now on?

Ibamoto: Certainly it has the potential, but it relies mostly on its rouge factor. People weren't expecting it this tournament, so I was able to sail through pretty easily. But, now that people have seen the deck and seen the list up on Sideboard, they'll know how it works and think of ways to beat it. So, it probably won't be as strong of a deck and may not end up being a lasting archetype.

Sideboard: Regardless of that, you must be happy with its performance.

Ibamoto: Yeah, four people used the deck and three made day two. One is in the Top 8. The deck definitely did well.

Sideboard: On a personal level as a deckbuilder, what does the accomplishment mean?

Ibamoto: I like making weird rogue decks, so I'm happy people are saying, "Ibamoto's deck, that was pretty crazy. It's a cool deck!"

Sideboard: So for the next Constructed event should we expect something new from you?

Ibamoto: Hold onto your hats.

Ibamoto: There's only a week left in the season, but there's still some PTQs. It'll be nice to see if anyone uses this next week, and I'll be really happy if I look at the coverage and see people playing it.