The Steaks Are High 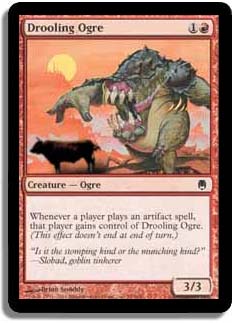 you fly halfway across the world to play in a Pro Tour only to not do as well as you hoped, what do you do to occupy yourself until your flight home? Sure, you can see the sights of the city, but if you still want to play Magic, there's always the intrigue of side events. Pro Tour players can't play in the Pro Tour Qualifiers that are often the most popular tournaments, but on occasion there is an open event with a big prize. This time around, Pro Tour Kobe has such a tournament. And the prize is beef.

That's right, today's Standard side event will give free Kobe beef meal coupons to the Top 4 players. Sounds strange? For those who aren't familiar with Japan or don't watch Iron Chef religiously, it may come as a surprise. But, Kobe beef is legendary for being exceptionally tasty. That kind of quality comes with a hefty price tag- a dinner will run you around 5,000-10,000 Yen (about $50-$100). For those who would rather duel for their dinner, however, there's the opportunity to have it for free. Aside from the Top 4 players being able to fill their bellies with some of the best steak in the world, the winner will receive 36 boosters and ten starters of Japanese Fourth Edition, which is black bordered.

Osyp Lebedowicz is one of the players competing in the Kobe Beef Open, and joked around about playing for food. "Things are getting tight in the Lebedowicz household. I have to bring home the beef, so to speak." Aside from the delicious prize, Osyp is enjoying playing against a mostly Japanese field. "After one of my matches, my opponent goes 'Can you please sign my card?' So I start signing it, and he goes 'No, no! Joe Black!' I'm like, 'Aww yeah!' I didn't know Japanese players ever read my stuff!" Not only does he get to interact with new players, but he's also had the opportunity to impress them with his tech. "I'm actually the Japanese player, because I'm playing the craziest cards and they love it. They take Standard very seriously so they're playing the regular cards, and after sideboarding I drop this bad boy on them (Drooling Ogre). Oh baby! They don't know what's coming at them! Against a deck like Slide, he comes out on turn two and you just beat them. It's been insane every time."

I heard that Gary Wise was also in the event, and I saw him playing a fun game against a female Japanese player named Osami Kataoka. "My record is now 1-1. Osami beat me, so I'm going to team with her tomorrow in the Kobe Beef Team Challenge. I'm going to ditch Gabe Walls and Antonio for her." Apparently, Osami has Gary's number, so he'd rather have her on his side. "She beat me in the tournament, she's beating me in the fun games, she beat me in arm wrestling, she beat me in a dance competition, she beat me in English, she beat me in Japanese, obviously. Basically, everything I ever thought I was good at, now I know I'm not good at because Osami has shown me that I'm wrong." Apparently, Gary was so impressed that he's ready to ditch his regular teammates too. "If she can destroy me this way, then she can destroy everyone else's ego this way too. I might have to team with her in Boston! Cuneo has replaced Turian on our team, but now we may have to replace Eugene with Osami." As far as the prize is concerned, Gary couldn't be happier. "If the Pro Tour was for steak, I wouldn't be quitting at the end of this year."

Olivier Ruel was the only Pro Tour player I talked to who played in the Kobe Beef Open, and actually had a Standard deck to use instead of just running his Pro Tour deck. "I borrowed one, since I didn't really see myself playing a green Tooth and Nail deck in Standard. I played white-blue-green Astral Slide, but the deck wasn't right so I dropped out and I'll fix it for the next one." The prize has him excited too. "When I told people in France that I was going to Kobe, everyone said I had to try the beef. But then I got here and saw the price, and was like, 'No, I have to win the tournament.'"

I watched Mike Turian playing a match, and saw his artifact heavy block deck completely annihilated by Akroma's Vengeance. "I didn't change a thing. I showed up about fifteen minutes before the tournament, found out about it, and thought it sounded fun so I played the same exact deck as the Pro Tour." Mike was especially enthusiastic about the prize, because he had Kobe beef already this weekend, and liked it quite a bit. "We went to have Kobe steak last night and it was awesome, so it's definitely one of the better tournament prizes I've played for." He was also quick to point out the dent that it put in his wallet. "I paid about $80, but it was worth it. It was really good. Before I left yesterday I saw it on the board, and I wasn't sure about playing. But, then I saw that Osyp and Gary were playing, so if I don't win at least one of them might and they'll take me out for Kobe beef."

So, while playing Magic for steak may sound weird, everyone involved seems to be having a lot of fun. The Pros are interacting with the local Japanese players, and the possibility of a free dinner has everyone salivating. The unique, fun prize has a lot of players joking around, such as Osyp who won a Pro Tour last season. "Last year's block Pro Tour I was playing for $30,000, this year I'm playing for a steak."