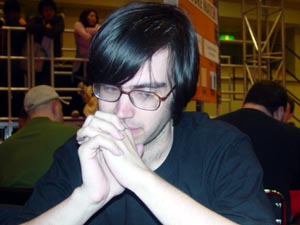 asked, Zvi answered the titular question with a question, "How much time do you have?"

Zvi Mowshowitz is one the small handful of players you always expect to find near the top of the standings at a block constructed Pro Tour. In addition to winning the Invasion Block Constructed Pro Tour in Tokyo a few years back he had never failed to win money at a Block Constructed event. That is why it so startling to find Zvi milling around outside the play area looking in and wondering what happened.

He put the bulk of the blame squarely on the continuing education of Justin Gary. Justin was Zvi's primary playtest partner in crime on the YMG team. Justin has not excluded the possibility of continuing to play on the Pro Tour--he is likely going to team with Zvi and Alex Shvartsman for the Team event in Seattle-but the demands of law school prevented him from being able to work for or participate in this event.

Zvi's time was similarly impeded by his recent move to Denver. Zvi took a position as the lead developer and designer for the Cyberpunk card game. While he did put in his time he was not able to put the kind of work into the event that he did for past events.

"We lost Justin to Law School and he was not available for testing. This meant the rest of YMG had to step up and get certain facts right. Unfortunately, no one on the team could really fill the role of constructive playtest partner like Justin had in the past."

Zvi did not intend his comments to be disparaging. He explained that successful play testing comes from the right combination of personalities and is not easily reproduced. "The first person who filled that role for me was Scott Johns in my preparation for Tokyo. You have to sit down to test in an egoless state and be prepared to play a lot of different roles. Scott had those skills. I feel I have those skills and obviously I think Justin does as well."

"You can't do it alone. As long as you have one other person you will be okay. It is amazing when you have more than one. For Tokyo we had Scott Johns, Kai Budde and John Omerod to name a few." Zvi has a $30,000 trophy check hanging in his Denver home from that Pro Tour.

"After Scott stopped playing competitively I began to work with Justin Gary and he had all the requisite skills. You also have to like working with that other person," added Zvi. "For this tournament Justin could just not put in the work."

YMG also underwent other radical changes and the team barely resembled previous incarnations. In addition to the absence of Justin, Rob Dougherty was not going to be qualified for this event and the mantle of team leadership fell to Tom Guevin. Under his leadership a number of new players were added, "The team added a couple of Dutch players--Ruud Warmenhoven and Jelger Wiegersma--a handful of Canadians--Rich Hoaen, Jeff Cunningham and Mark Zajdner--and Jordan Berkowitz."

Zvi was hoping that the expanded roster would allow for two players to step up and fill the roles that were being vacated by himself and Gary. "I was pleased with the results of a number of the members--particularly Jelger--but the requisite relationship was not there. The critical mistake I made was disconnecting from the group while I traveled to Denver and settled in and regained internet access--about two weeks."

At the time Zvi departed New York the group felt that Affinity was the best deck but they could not settle on the best build because they did not have a fully defined picture of what meta-game to expect. "By the time I checked back in my teammates claimed that the entire metagame was going to be made up of red-black affinity and red-green decks with Fireball. With only a week to go before the event I had to assume their assumptions held."

Zvi began to toy with a version of Affinity that exploited Aether Vial. "From the beginning I felt that Aether Vial was very powerful. It fixed many of the color problems I found in the Affinity deck. It serves so many functions. It is mana acceleration, helps your affinity, and makes your Skullclamps more effective than your opponent's. It also creates very scary board situations where your opponent has to decide whether or not to attack into an untapped Vial."

Zvi and the rest of team worked in the days leading up to the event on tuning their deck around Aether Vial. "Then we got here and found out our assumptions were completely wrong. There was this mono-red deck, the green-red decks looked radically different than what we were expecting, and according to the dealers here none of the green cards were moving at all."

"Plus, we clearly did not have a good understanding in terms of the mirror either." Zvi and company tried to strike a deal with Nick Wong and Albertus Law of Singapore for their mono-red deck and their iterations of Affinity. "If we could have gotten that information a week earlier I would have been playing a very different deck. But one day was not enough."

Zvi was not prepared to take a whack at playing Big Red and decided to call an audible and play with a metagamed variation of the Affinity deck, "I took a gamble on my version with Leonin Elder and hoped I would look like a genius." 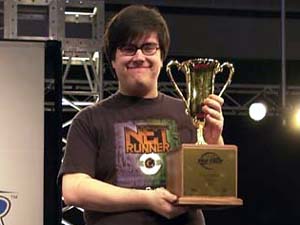 "I am not sure how good or bad the deck actually was since I lost so many mirror matches and the Affinity mirror is so random. But I know it was not the right deck to play."

The rest of the YMG squad went with either their original Affinity deck or audibled to the Big Red deck that new team members Nick Wong and Albertus Law brought to the table. At the time of this writing both Jelger and Albertus were in excellent position. Dave Humpherys was doing well. Berkowitz and Rietzl were also in Day Two although Reitzl was out of contention for a Sunday appearance at this point.

"The weekend was not a total YMG wipeout but…" Zvi let the thought trail off. He was clearly disappointed to see his streak of Block Constructed money finishes come to an end.