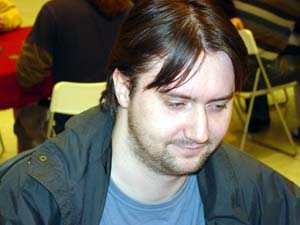 was no shortage of star power for this Grand Prix. There were players with Pro Tour Top 8 on their resume from Japan, America, Finland, France and Sweden. In fact, there were more players with high level Top 8 finishes in the room then the Top 8 on Sunday could accommodate. A quick poll of the name players in the room as to the most likely player to win the event was generally met with a shrug and a reluctant, "Anton…"

I sat down with the Swedish player as he opened the collection of cards he would have to work with this weekend. The Grand Prix marked his first Limited tournament since his Top 8 performance in Amsterdam. This was also his first opportunity to play with Darksteel in a tournament environment.

Anton did not attend Grand Prix Madrid. It was the week before Kobe and he felt he had to choose either Madrid or this event. Otherwise the travel would have been too rough on him. Anton had done extensive drafting with the new set. He arrived in Hong Kong the Monday after Kobe along with Jens Thoren, Ben Stark, Gabe Walls, Sam Gomersal, and Antonino DeRosa. In between sight seeing and shopping the group was drafting non-stop.

Anton explained his need to draft with a laugh, "I am so stupid. I have to draft forever to figure the new set out. I'm not like some guys--Jens for example--who just pick up the cards and understand how to draft. I'm the last guy to figure it out. Well…not the last guy since I draft so much but I need the most experience."

As he began to lay out his cards Anton was not very impressed. As he set aside the cards that had potential the white cards and a Spikeshot Goblin were the first cards he was drawn toward. "I have good white…I'm going white-red I guess. It is okay but not great. I have a lot of crap."

At first Anton was concerned that he did not have enough equipment for his base white deck. His creatures included Skyhunter CubAuriok Steelshaper, and Auriok Glavemaster. As he took a closer look he found more than he originally thought and pulled out Bonesplitter, Scythe of the Wretched, Leonin Bola, and Fireshrieker. He was also lucky enough to pull two Blinding Beams--one in foil.

His opinion of the deck was changing as he pulled out more and more cards that could go in his deck. "Maybe this is not so bad. My white is really, really good."

All of the cards Anton would consider playing a color for seemed to be in his red and white piles. His black had only an Essence Drain and there was nothing in blue or green that screamed 'play me'. Anton seemed grateful that his cards were making his decisions for him and he cackled over his good fortune, "Heh heh. I always get the easy ones to build. Look at the black--just one card."

With all of his playable red and white cards in front of him Anton's opinion of the deck finally took form with another cackle to punctuate it, "This is probably pretty good--heh heh--this IS good." He was looking at twenty seven cards and had to cut three of them. The first one to get banished was a Leonin Elder, "I don't have many artifacts…"

Next up was the Ogre Leadfoot--a cut he was reluctant to make, "If this was a draft he would be gone already but in Sealed Deck he is better. He is still not good but there are more artifact guys than in draft."

There were still two to go and Anton arched an eyebrow as he considered cutting an Altar's Light. He put that decision off by cutting a Stalking Stones that he had been treating as a spell, "I am never going to activate it and I want to maximize my chances for a turn three Razor Golem."

With that out of the way he was down to two more cuts. He did not have a ton of creatures but he was attached to all of his spells. He briefly considered cutting a Talisman but then laughed, "I would need a seventeenth land then!"

He decided that his Arcbound Stinger was the worst card in his deck and moved it to the sideboard pile but then another glance through his artifact pile turned up several more playable creatures including Frogmite, Hematite Golem, and Oxidda Golem. "This is impossible! I keep finding guys. This is clearly an equipment deck so I have to play all of it but I also have to put a race on the table or my Blinding Beams are so bad."

Anton shuffled around his creatures and the Arcbound Stinger was eventually replaced by an Oxidda Golem despite a last minute filibuster from the Frogmite. The last card cut would be a spell. Anton moved his Altar's Light to the board with a sigh, "I feel so stupid though."

Just before handing the decklist in Anton made one final change. He put the more flexible Altar's Light back in and cut the narrower Unforge. He was still unhappy but not with the overall deck. He had good white creatures, Spikeshot Goblin, equipment for both, and two Blinding Beams for the finish. He also had an Icy Manipulator.

All in all, it was an extremely good deck that would be in the hands of one of the best Limited players in the game. It seemed likely that Anton would have the opportunity to put all of his drafts to good use tomorrow.