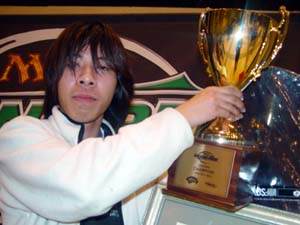 , no one is on more of a roll right now in competitive Magic than Kazumasa Shiki. The rookie started off with a 17th place finish at Pro Tour New Orleans, won Grand Prix Okayama, and came in ninth at Pro Tour Kobe, barely missing Top 8 on tiebreakers. All this has made him the favorite to win Rookie of the Year, following in the footsteps of other Japanese Magic powerhouses Katsuhiro Mori and Masashi Oiso. Even though Shiki's career has just started, the finishes he's been putting up show that he is a true talent, and it will be exciting to see what the future holds for him. I sat down with him on Saturday to find out a little more about where he's been, and where he's headed.

TW: How long have you been playing Magic?

Shiki: I started playing around Tempest.

TW: Why did it take you so long to get onto the Pro Tour?

Shiki: I always wanted to be on the Pro Tour, but I wasn't able to because even if I won a qualifier I couldn't afford to go. It's only recently that I've been able to think about having a Pro career.

TW: You did pretty well to break out at New Orleans, coming in seventeenth.

Shiki: That was my first Pro Tour. I had qualified many times, but New Orleans was the first one I was able to go to.

TW: What made that possible?

Shiki: I got some money so I was able to afford a plane ticket, and it was Extended so I thought it would be a cool Pro Tour.

TW: Between that finish, winning Grand Prix Okayama and coming in ninth at Pro Tour Kobe, you've been doing very well. What do you attribute your success to?

Shiki: At last year's Nationals I was invited on rating, and made Top 8. After that I was like, "This is cool." I had never been a serious player, but after Nationals I realized "Hey, I can play. This is a lot of fun, and I want to make Top 8 again. I want to try to win something." So it was a determination thing, I was just like, "You know what? I want to be a good Magic player."

TW: What do you think about being in the lead for the Rookie of the Year title?

Shiki: Winning Rookie of the Year would be really cool, and if I can do it, I want to do it. But, that's not really my goal. I want to win a Pro Tour.

TW: Do you feel like you're following in the footsteps of players like Katsuhiro Mori and Masashi Oiso, who have had that title and gone on to have really good Magic careers?

Shiki: Well, if you put it that way, yeah. Rookie of the Year is a good stepping stone towards a big Pro Tour career, and I definitely feel that I'm walking down a well-tread path with Oiso and Mori being able to open that up.

TW: Looking at that history and what you're doing, do you see yourself as the next generation in that tradition here in Japan?

Shiki: Not really, it's nothing as fancy as that. I just want to have fun playing tournaments, and if I can win, all the better. I don't think of myself as having any position in the community, per se.

TW: I'd imagine that with your success, we'll be seeing you travel to Pro Tours regularly now.

Shiki: I've already made plans to go to San Diego and Worlds.

TW: Should we expect even bigger things out of you soon?

Shiki: I want to win a Pro Tour, so I'm going to keep trying. Keep going and keep playing until I make Top 8 and win someday.