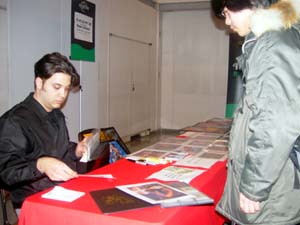 you've ever been to a Japanese Magic event, or even followed one online, you probably know how popular Magic artists are on this side of the world. Lines will often grow to legendary proportions, as Japanese players anxiously await the opportunity to meet the artist and get their cards signed. This is not to say that artists aren't popular at other events, but in Japan the players tend to be a little more enthusiastic.

Randy Gallegos, who has returned to Japan after being here in 2000 for Grand Prix Nagoya, has experienced more of the same from the players this time around, and enjoys it quite a bit. "Everyone is always extremely nice here. They're very polite, kind of quiet and a little shy, but given the lack of English they're as friendly as can be." And are there any differences between American and Japanese players? "Yeah, I can communicate with them!" This time, Randy is perhaps a little more equipped to relate to the players, although the language barrier between English and Japanese is pretty tough. "I've been studying Japanese a bit, but not enough to get me very far with most of the players today." If the Japanese players are notoriously enthusiastic about the art, Randy has been giving them the favor back. In fact, he even turned down a lunch break. "I haven't taken a formal break, but during the rounds I'm able to rest a little." Still, between arriving at 9am and ending around 7-8pm, it's a full day at the table.

And what about the metal world that Magic has been in over the last year? For the man who brought you Regress and Electrostatic Bolt, Mirrodin Block is a nice change. "I like it. It's a big departure from what had come before, and I really like that Magic is starting to move in a direction where it's taking greater visual risks. I'm looking forward to that continuing."

For more of Randy's work, you can go to his website. "I run the website and we have lots of other artists on there as well, such as Ben Thompson, Terese Nielsen, R.K. Post and others, so check that out."