As I walked over to Yuuya Watanabe’s match to let him know that his final rival in the running, Tomoharu Saito, had lost his match to make Top 8, I saw a player utterly engrossed in a tense Game 2.

The Dredge mirror against Joel Calafell did not look to be going well for him, although he was up a game. Iona, Shield of Emeria was on the battlefield, as was Leyline of the Void. Watanabe controlled neither. He had some Narcomoebas and an Umezawa’s Umezawa’s Jitte. Just enough to stop Calafell from being able to do much profitable attacking quickly, but certainly nothing to get him out of what was a very tough lock. It seemed certain that Watanabe was out of it, but from nowhere, he won it, using Hedron Crabs to deck Calafell, who had aggressively dredged to down to just a few cards in his deck. Watanabe revealed that he had sideboarded away from being a Dredge deck, and had enacted a clever plan to deck his opponent, while gumming up the board with creatures.

Watanabe’s plan in that match had worked perfectly, and in spite of the final stretch to the title having been a little rocky, his face lit up when he realised that he had made it to the moment he had made it as Player of the Year 2009. All through the course of Worlds, Yuuya had been closely watching those trying to catch him. Juza, his closest rival going in, had fallen near the end, leaving just friend and testing partner Tomoharu Saito, who had the chance to pip him at the post by placing at the very top here in Rome.

With translation help from current Player of the Year Shuhei Nakamura, I sat down with Yuuya for a few words. For Watanabe, winning this auspicious title clearly meant a lot, but a small part of him remained sad that his friend Saito had not made it to Top 8.

Having tested with Kotarou Ootsuka, Kazuya Mitamura, Tomoharu Saito and Shuhei Nakamura, Yuuya has always kept company with some of the best in the game. When asked about his next goal after achieving this title, he was emphatic in a way that needed no translation.

Watanabe’s phenomenal consistency in hitting Top 8 in the latter half of what year was what propelled him so far into the lead in the latter moments of the 2009 season, but Watanabe has yet to lift a Pro Tour Trophy. Considering he first played on the Pro Tour in 2007, his rise can only be described as meteoric, and he was keen to show that he hoped for it to continue that way. 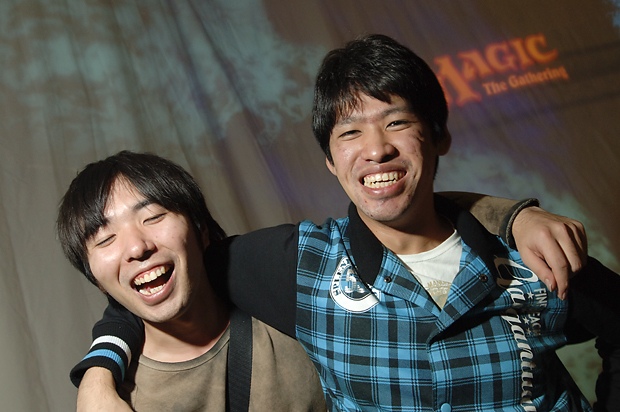 Shuhei Nakamura, the 2008 Player of the Year, suggested that we might well see Yuuya become part of the Player of the Year travel club, which has Tomoharu Saito and Nakamura himself travelling the world to Grand Prix all over. With each of them at Level 8 also, they would form quite the raiding party at any event you would care to mention.

Nakamura was a little sad not to hold the title any more, but summed things up in straightforward fashion.

“Yuuya was the best player in the world this year. I am happy that he is the one who has the title now.”

Congratulations to Yuuya Watanabe, the 2009 Player of the Year! 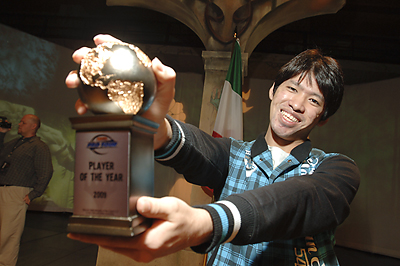