With the culmination of the 2012 season here at Pro Tour Avacyn Restored, the final Pro Point tallies have been collected, giving us our list for the captains for the World Magic Cup!

Scanning through the list of names, there are a number of high profile captains. The first two are a pair of standout players, Jeremy Neeman from Australia and Vincent Lemoine from Belgium. Neeman has a pair of Grand Prix wins and a Pro Tour Top 8 to his credit, while Lemoine has a 3rd place Pro Tour finish, a Grand Prix Finals appearance, and two appearances on Belgium's national team, including the 2nd place team from 2004.

The next name that caught my eye is a biggie. Paulo Vitor Damo da Rosa is the representative from Brazil, as well as the Latin American representative in the Players Championship. But Brazil isn't the only team with a Hall of Famer as their National captain. The United States has Brian Kibler hoisting the flag in Indianapolis later this year. At Worlds in San Francisco, Kibler revealed that the thing that saddened him the most was that he might have missed his chance to carry his country's flag as the captain. Now he gets his chance at the World Magic Cup. He'll also be sleeving opposite Damo da Rosa in the Players Championship a couple of weeks later. 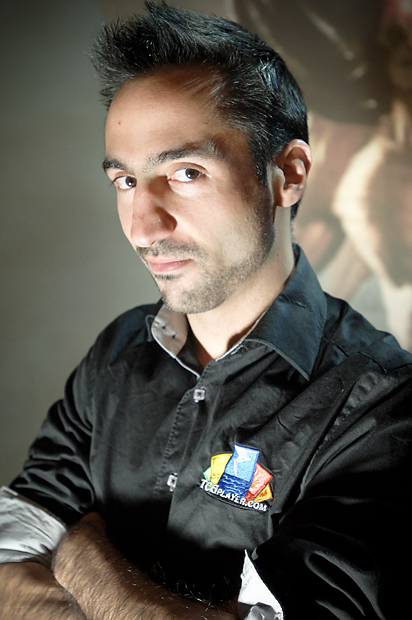 Globetrotting Hall of Famer Raphael Levy is one of many Hall of Famers who will be representing their country in the World Magic Cup.

France also has a Hall of Famer in their corner, the world-traveling Raphael Levy. Levy is one of those players that has been around the game forever, and has never slowed down, putting up finish after finish, including a win this year at Grand Prix Austin, and it proves why he earned that Hall of Fame induction with each event he enters. Surprisingly, there will be a fourth Hall of Famer with his country's flag in hand come August: Jelger Wiegersma from the Netherlands. While he got most of his points from making Top 8 in Philly, he only held a one point lead coming into this event. His performance here at Pro Tour Avacyn Restored cemented his position at the lead for the Dutch, marking the second time he has represented his home country against the world.

Speaking of notable movers from this event, I would be remiss if I failed to mention that champion Alexander Hayne and finalist Gaudenis Vidugiris will be representing the countries of Canada and Lithuania respectively. Hayne has proven that the work he puts together with David Caplan bears fruit, putting Caplan into the Top 8 of Worlds in San Francisco before netting Hayne his win here in Barcelona. As for Vidugiris, his dual citizenship with Lithuania gives him the ability to play for his country of birth, and they get quite a strong player in him, as his run to the finals here and his multiple Grand Prix titles illustrate.

They aren't the only players to benefit from their high Pro Tour finished this year. Samuelle Estrati parlayed his Pro Tour Philadelphia win into his Italian captain position, Max Sjöblom's Top 8 at that same Pro Tour earned him the right to represent Finland, and Andrejs Prost's Modern mastery earned him a slot for Latvia (not to be confused with Latveria, which is obviously being represented by Dr. Doom). And this list wouldn't be complete without mentioning Denniz Rachid, who will be representing Sweden in Indy. Rachid is the only player not named Jon Finkel to make Top 8 of the last two consecutive Pro Tours, an incredible feat!

Finally, I want to conclude this list with a man who found himself unable to play for many events this year, yet still managed to take his place as his country's captain. Considering his country was Japan, one of the most difficult to win countries in the world, this feat was pretty amazing. Yuuya Watanabe will be representing Japan on the strength of back-to-back Grand Prix Top 8s, including a win at the second in Kuala Lumpur. In addition to that, Watanabe made a great run here at Pro Tour Avacyn Restored, falling just shy of the Top 8 in 18th place.

See you in August!