U.S. Nationals Grinders have historically been the pinnacle of watching the metagame as a spectator sport. In years past, we have glimpsed the first appearance of Kjeldoran Outpost, the rise to dominance of Oath of Druids, and in the hands of young David Williams, even the hairline fracture Survival of the Fittest before its big break at Worlds 1998. Legendary teams have been forged in the Nationals Grinders with their $42 Tickets and long bus rides, and these tournaments have historically set the metagame for Nationals itself, and for the rest of the Championship season.

But who could have predicted this?

Agro Red has been a staple of the format since French Regionals months ago. Since then, it has evolved from a base-land destruction deck to a more focused beatdown; of the nine "Red Deck Wins" variants that graduated the meatgrinders, seven started Sword of Fire and Ice, with the other two running Swords and/or Umezawa's Jitte in the board. Zo-Zu the Punisher and Jinxed Choker have become common cards as well… The new batch of Red Decks are all about damage… even if they have to deal some to themselves.

Notice how Mike McGee can get an aggressive start with Frostlingand has incorporated more burn elements - such as long game Shrapnel Blast - into an archetype that once started not just Stone Rain and Demolish in addition to Molten Rain.

Red we had on the radar… But White Weenie? The surprise of the Grinders is that the little white men are really good. Sporting similar aggressive strategies to Red Deck Wins, White Weenie gets in there early and forces the opponent to play on the defensive. Though white traditionally lacks the late-game finishers of a Shrapnel Blast or Arc-Slogger, Jinxed Choker has given some versions new life. Shining Shoal is another card that can get those last two points of damage in, and Hokori, Dust Drinker is present to punish slower decks. Hokori not only slows down big spell decks in general, but even Green decks - that are now so reliant on comes into play tapped acceleration via Sakura-Tribe Elder and sometimes Kodama's Reach - fail to generate any advantage from having more physical lands in play.

"White Weenie is simply the best deck in the format," says Sam Gomersall, visiting member of the English National Team, Magic Invitational participant, and international superstar. "It won English Nationals… What more do you want?"

The key to White Weenie is that Damping Matrix is superb in the format. Each of the six qualifying White Weenie decks started at least three copies of the Mirrodin Block hoser, with five of the six running all four main.

"White Weenie is the only deck that can exploit Damping Matrix," Sam continues. "Any other deck gets destroyed by it, so they can't play it… whereas White Weenie can just stick it in and use it to beat all the other decks."

Just think about it: Mindslaver, Kiki-Jiki, Arc-Slogger, Vedalken Shackles, Oblivion Stone, even Aether Vial…the key threats in many of the format's best decks are all shut down by Damping Matrix. The White Weenie deck, on the other hand, can go about its Lantern Kami and Suntail Hawk business without adverse interaction. The versions that run Chrome Mox can even keep tapping that accelerator while "locked" under their own Matrixes because the Matrix is kind enough to look the other way where mana abilities from artifacts are concerned.

At the same time, White Weenie's proactive cards are highly effective at filling particular niches. Look at a card like Auriok Champion. As a pure beatdown creature, Auriok Champion is rather poor… a 1/1 for two mana. But in a format with so much red, it is a superb blocker. Incidentally, Auriok Champion generates a Soul Warden-like life increase that is doubly helpful against Agro Red Decks and all their fire. While Leonin Skyhunter and Suntail Hawk tear the skies, less flashy cards like Auriok Champion and Raise the Alarm help White Weenie win the race despite being far behind in the reach category: they block.

I consider it a point of pride that Kuroda-style (i.e. "Flores") Red took home two Grinders slots as well… twice as many at Tooth and Nail, thank you very much. Kuroda-style Red, while considerably slower to kill than Red Deck Wins, has far better tools for fighting a deck like White Weenie. Admittedly, a deck designed to abuse Sensei's Divining Top and Arc-Slogger is hit hard by Damping Matrix, but Culling Scales was chosen specifically as an "Oblivion Stone" that operated even when the opponent had Matrix in play! There is a fierce dance between Champions, Scales, and Terashi's Grasps to be sure, but Kuroda-style Red has the most powerful reach in the format as well as strong answers in Sowing Salt and Unforge for other predicted opponents and their specialty lands or Swords.


The big story after White Weenie has to be the disappointing performance of Tooth and Nail. Considered by most to be the best deck in the format, Tooth and Nail produced only one Grinder invitation out of a possible 24. Metagame pundits blamed it on a bad day and a lot of hate.

"People know how to beat it now," said Teddy Cardgame, blogger extraordinaire, Magic editor, and metagame fanboy. "Tooth was probably under-played considering how good a deck it is."

Considering the fact that one stray Molten Rain or a Damping Matrix and a Hokori can give a beatdown deck just enough time to take down the Deck to Beat, perhaps the rest of the format has just caught up. Maybe the singularly dominant archetype from U.S. Regionals and all of post-Affinity Standard has finally been de-throned…but check back on Sunday afternoon for this one. I'm not willing to call it a day for the big green guys just yet.

My pick for the most inventive deck of the Grinders has to be Teddy Wyly's Proteus Belcher:


Combining many of the best elements of a true Control Blue deck with that "icky combo feeling" (tm Chris Pikula), Wyly's deck can attack an opponent on multiple fronts. Against a straightforward creature deck, its weapons are many: Vedalken Shackles and Threads of Disloyalty are the all stars of anti-beatdown in today's blue arsenal. But in Wyly's deck, they have a second motive. Wyly can steal a guy and then aim his Proteus Staff at it. Check that deck list: there is only one creature. He really is going to get that Darksteel Colossus. 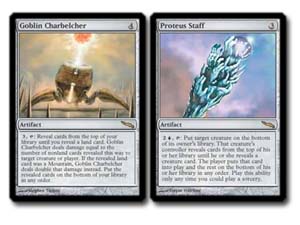 Proteus Staff also allows Teddy to stack his deck for purposes of Goblin Charbelcher. With nothing more than a Fabricate and a Blinkmoth Nexus, Wyly can set up a lethal Charbelcher as well. This is particularly good in games where Wyly accidentally draws his Darksteel Colossus.

Tricky? Yes. Powerful? Indubitably. Wyly's deck, like many of the others, though, is completely shut down by Damping Matrix. White Weenie has historically been a great deck at U.S. Nationals. In a year dominated by Necropotence, Bill Macey ground in back in 1996… and did it again with a different White Weenie come 1999. Matt Linde showed Mike Long the Abeyance in 1998, and Kyle Rose won it all with his Waylays the next year. Even when held down by powerhouses like Napster and Angry Hermit, Elliot Fung was able to battle to the Top 8 of U.S. Nationals in Orlando.

Don't be surprised if history repeats itself.

Check back to MagicTheGathering.com's new and improved Tournament Center throughout the weekend to follow the progress of the little deck that could and all your favorite stars until we crown the 2005 U.S. National Champion!