Feature: All Roads Lead to Nationals

n the old days, all roads led to Rome. This weekend, many roads, representing many different ways to qualify for Nationals, led to Baltimore. Though they qualified in myriad ways, all 211 players in town this weekend are fighting for their chance to represent the USA at Worlds in New York. With Day 2 underway, I talked to several players about the various ways they got here.

Jeff Blystone won his invitation through the City Champs program, which made its American debut this year. Jeff played in the Cleveland area, usually hitting one or two tournaments per week. He said many of the players took it seriously, even though he himself did not until the final weeks, when it was obvious he was doing well. His qualification notwithstanding, Jeff said City Champs was a good program, giving himself and others a reason to play Magic in person more often, instead of just relying on Magic Online. 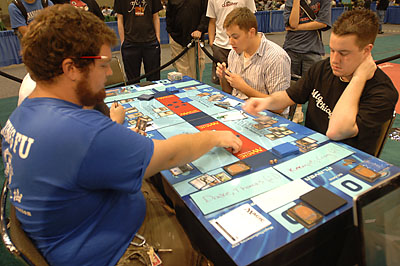 Thomas Drake won his slot at the nearby Mid-Atlantic Regionals. He plays at Atlantis Games and Comics in Virginia Beach, which saw three of its regulars qualify through Mid-Atlantic Regionals (Drake, John May, and Brian Kelly). This year's Regionals was Thomas's first, and he got his deck from Shaheen Soorani shortly before that event. A newcomer to large Magic events, Thomas said the spacious Baltimore Convention Center provided a great environment and a perfect place to play. He also made sure to compliment the courteous and helpful judges, whose increased presence at large events contributes to the good playing environment.

Another player from Atlantis Games, John May is playing in his first Nationals, after qualifying through his second-ever Regionals. He has some prior big-event experience, coming in 23rd at Grad Prix-New Jersey in 2004. John described himself as a recovering World of Warcraft addict, having recently gotten back into competitive Magic. He playtested regularly with fellow Atlantis gamers and Nationals competitors Drake, Kelly, and Soorani. Despite beating Paul Cheon in Round 8, John said his Limited deck was "horrendous" after losing to Steve Sadin in Round 9, but feels he has a decent chance to make Top 8.

Defending champ Paul Cheon is one of few players to qualify three different ways-and he was able to name all three (rating, Pro levels, previous champion). I talked to Paul after he had just won a Draft match to go to 7-2. He said his Draft deck is not as solid as he thought, but that a win next round would put him in a good position to make it back to the Top 8. Paul was very positive on his Standard deck, saying that a few changes from the normal "Pickles" shell had improved the matchup against aggro decks-important in a room where "everyone is playing Rakdos."

Qualifying two different ways (Pro levels and rating) was Alex Majlaton, though he was unaware he has qualified on the strength of his rating. Alex is no stranger to top finishes in the Maryland area and no stranger to large tournaments either, finishing second at Grand Pix Charlotte in 2005. At 6-2, Alex sounded disappointed with his draft deck. He said he did "a ton" of drafting starting three weeks ago, but focused on the new Standard for the last week. On an accessories note, Alex's familiar pink hat has been replaced by a blue one for this event, but the headwear swap doesn't seem to have affected his play.

Adam Yurchick qualified through Pro levels. He has played in every Consructed Pro Tour since Philadelphia in 2005, plays every North American Grand Prix he can, and will get into Worlds on rating also. Adam was 8-1 when I talked to him. Though he described his Draft skills as "mediocre," his deck had already gone 2-0 out of a strong pod; he was hoping for 2-1 and is guaranteed at least that much. This is Adam's second Nationals (he finished 22nd last year), and with four Standard rounds coming up and a deck that he likes, could a Top 8 finish be on the horizon?

At 8-2 after Round 10, Michael Bennett is the highest-ranked player who grinded in on Thursday. Michael lost in the second round of an early grinder, but decided to try again in the 6 p.m. grinder, the "last last chance." This is his first Nationals, though he has competed in the MSS (previously JSS) Championships before. For the grinder, Michael chose Project X, which he stuck with for Nationals because, "sometimes you need infinite life to win the game." With four rounds of Standard looming, Michael feels he has a good chance to live the dream of grinding in and going on to the Top 8.