ne of the most exciting stories from this Pro Tour was the stalwart fixture in the feature match area throughout Friday: Andrea Mengucci and his heroic stand as King of the Hill. After defeating the Pro Tour Born of the Gods champion, the No. 11 Ranked Player Shaun McLaren, in the very first round, Mengucci defended the throne for six more rounds. It took Pro Tour Hall of Famer and eventual Pro Tour Journey into Nyx Top 8 player Patrick Chapin to topple Mengucci from the throne.

The story might have ended there: An incredible Day One run followed by average performance on Day Two to find a Top 100 – maybe better – final result. Mengucci, however, remained a contender for Top 8 by continuing to win. Midway through Day Two he even managed to steal back the King of the Hill title by defeating another Pro Tour Journey into Nyx Top 8 player, the No. 2 Ranked Player Reid Duke. While his second reign wasn't long, Mengucci had proven his meddle and might weren't just in passing.

Earning any Pro Tour Top 8, let alone one's first, is an accomplishment that doesn't come easy. What was the path that brought Mengucci to the Sunday stage? It was a humble PTQ that qualified Mengucci for Pro Tour Journey into Nyx.

"My first Pro Tour was in 2009," Mengucci said. "I've just been playing PTQs and Grand Prix near Italy – just one Grand Prix every three months or so. It's my fifth Pro Tour but the first big event where I did well. I Top 16'd two Grand Prix but I don't think it's a good result: Here I played against a lot of good people."

Many of the game's elite players rally together to form teams, and it's a trend that exploded in recent years resulting in just about every player you run into participating on a team for testing and support. Mengucci was no different. "We have team: Through the Gate. I'm with Americans," Mengucci said. "Usually, I played with Italians for the Pro Tour. But I cannot say that the team helped me to Top 8 because I did the exact same things I did in the last Pro Tour: I played my own deck." 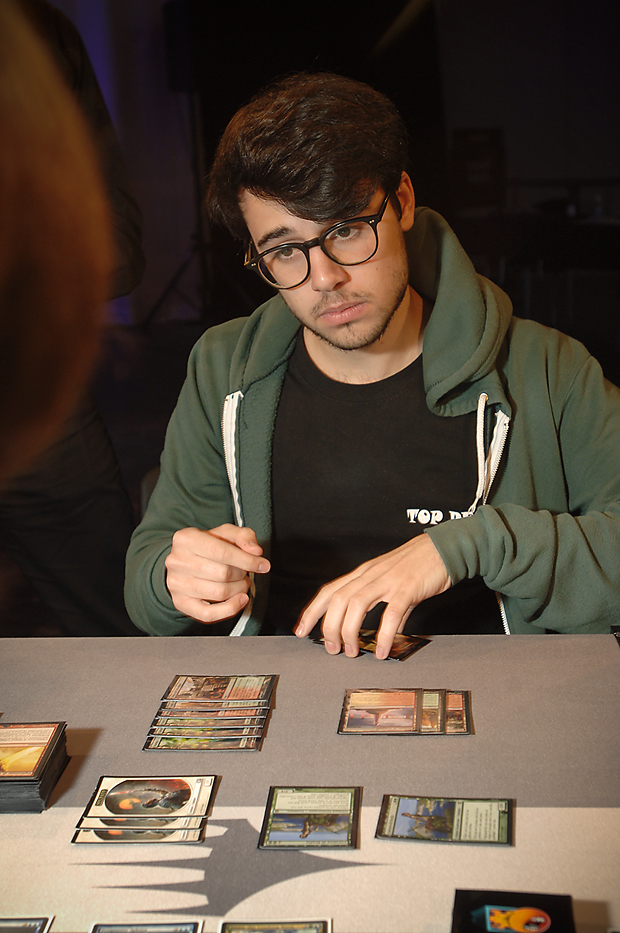 Pro Tour Qualifier Winner Andrea Mengucci came in with few expectations, but despite that, his results have propelled him onto the Sunday stage, making this his best Pro Tour performance out of the five that he's played in.

Mengucci had brought one of the most popular decks from the Magic Online metagame for the weekend, a red and green midrange deck with monsters like Polukranos, World Eater and splashing white for a pillar of Theros Block Constructed: Elspeth, Sun's Champion (also known as R/G Elspeth). Was Mengucci happy with his deck? "This was really the wrong deck," he admitted. "I lost to everyone. I really only won the mirror matches. I lost to BUG Control. I lost to Junk Constellation. Everyone is on Sylvan Caryatid and Courser of Kruphix – midrange – and it's really bad against that."

"I played my own deck. It's not the best choice – for sure not the best choice," Mengucci continued. "There were seven cards in the tournament I never sideboarded: four Magma Spray and three Anger of the Gods. I think it was a very lucky-to-good day."

"That's how I explain what happened: I can say for sure I'm not as prepared as these people," he said, gesturing towards the clusters of team Channel Fireball, Channel Fireball Pantheon, and MTG Mint Card, "and I've made many, many errors in the tournament. But sometimes you get lucky and arrive where I am now. I don't know I'll have the chance to do it another time. It was a series of fortunate events."

Fortunate circumstances or not, Mengucci's reign as King of the Hill was a streak that any player would be hard-pressed to uphold. A hero's journey is never easy. "I really enjoyed staying in the feature match area," Mengucci explained." I know people in Italy were watching me. They posted about me saying 'Go! Go! Go!' or 'Topdeck this!' or 'He won!' I was happy to keep on in the feature match area."

Was it hard falling to Chapin at the end of Day One? What about coming back to claim the title again for a round in Day Two? "I misplayed against him," Mengucci admitted. "It wasn't a misplay because I was excited or anything, but just a misplay: I talked to other players later and they explained I took bad lines of plays. But for sure I want to be King of the Hill. It was pretty exciting with all the people rooting for me."

While skill was a factor in boosting Mengucci to the Sunday stage, he was adamant that luck was on his side. "It's the classic Pro Tour where I come with a bad deck and no preparation and expect to go 4-4," he said.

"I don't know what happened. It's Magic."