Feature: The Art(s and Crafts) of Magic 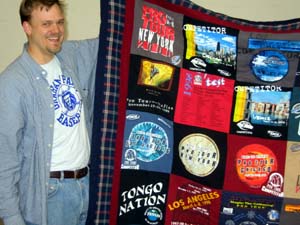 Gallitz has been retired from Magic since his crowd-pleasing Top 8 performance at Pro Tour San Diego a couple of year's back. He had barley touched a Magic card since then until the release of Mirrodin block. He now plays intermittently at the local store but only in friendly drafts--nothing too serious.

Donnie had made the move to the "real world" as a high school teacher and basketball/soccer coach. Despite his casual relationship to Magic he could not resist the lure of a Grand Prix only twenty minutes from his house and the opportunity to see friends he had not seen in years. Donnie was the talk of the tournament when he brought the quilt his wife Rose had made for him to the event.

Part of being a successful Pro Tour Magic player is the accumulation of Pro Tour T-shirts. Another part of that is the predictable reaction to the detritus on the part of the Magic spouse. "I had like thirty or forty t-shirts in my dresser and Rose insisted that we do something with them--get rid of them or something else."

She apparently opted for something else, "I came home one day and I noticed that they were all gone. She told me that she donated them to a homeless shelter. But for Christmas this past year she gave me this quilt. Her mother has always been an arts and crafts person and she finally taught Rose how to quilt. She made it for me and gave it to me as her first quilt."

The quilt rests at the foot of the couple's bed and serves as a reminder of Donnie's past success. After his Pro Tour San Diego Top 8 it is perfectly understandable that the city hold's a special place in his heart. His resulting rating from his farewell performance finds him Q'd for the upcoming limited Pro Tour. If Rose needs any more material it may soon find its way to her crafts room.

Donnie grinned and used a word that has surely never seen print on a Magic website before today, "She has enough T-shirts left over to make another one and she is thinking about making a set of shams. Soon we will have a Magic bedroom."