By Tim Willoughby and Craig Gibson

Scars of Mirrodin is fast approaching, and here at Pro Tour Amsterdam, we saw one half of the global event that was the Assault on Mirrodin party. Through the Magic of time differences, we got Magical cards a few hours before the party goers at the Penny Arcade Expo in Seattle, and along with having the opportunity to influence the events at that party, we got to see what happens when a whole Pro Tour gets its groove on.

With Scars of Mirrodin the whole metal plane is revisited, in a state of turmoil, and last night we found out the source of this upheaval: Phyrexian attack. Assaulted with preview cards, we began to see what it means for the Mirrans of Mirrodin to have to fend off the Phyrexian threat. 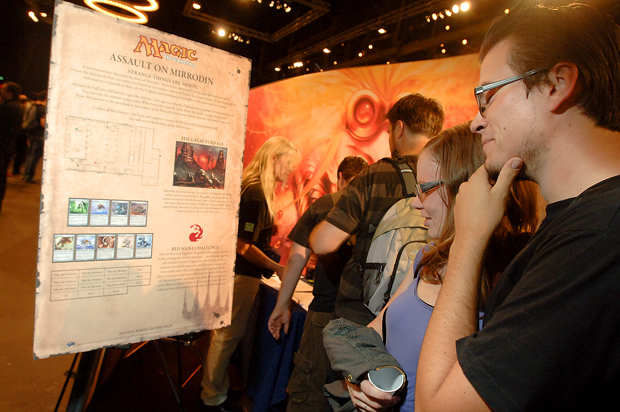 All weekend, visitors to the Pro Tour have been able to do puzzles that begin to reveal parts of Mirrodin as it is now. But with the party, preview cards abounded. 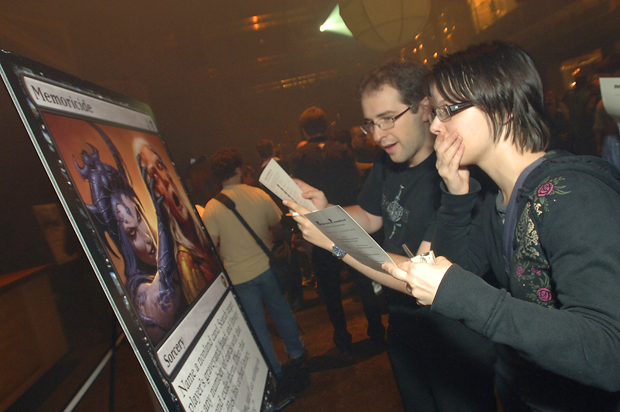 As the evening went on, as well as having more cards brought out, the lights changed to each of the colours of Magic, and with different light came different music, and drinks to suit any colour preference. 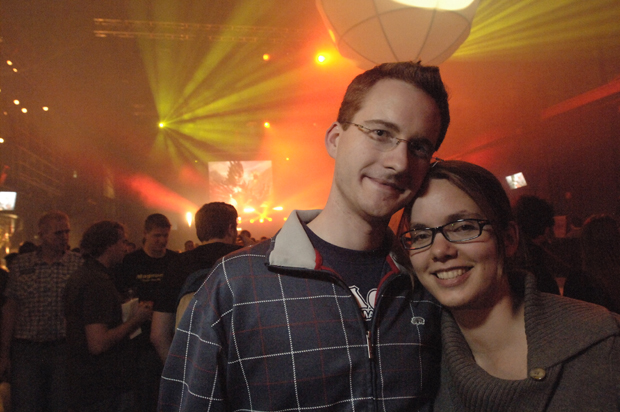 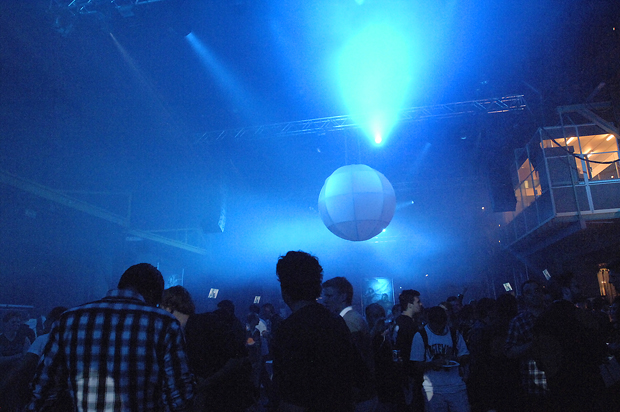 On the dance floor, things were going off all night, as DJ Damon dropped beats so infectious that he could in fact be Phyrexian. 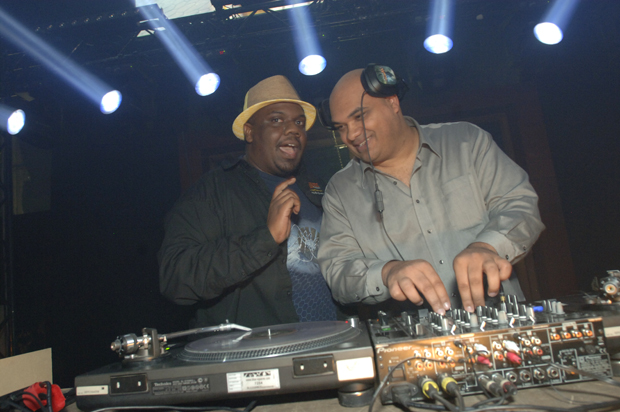 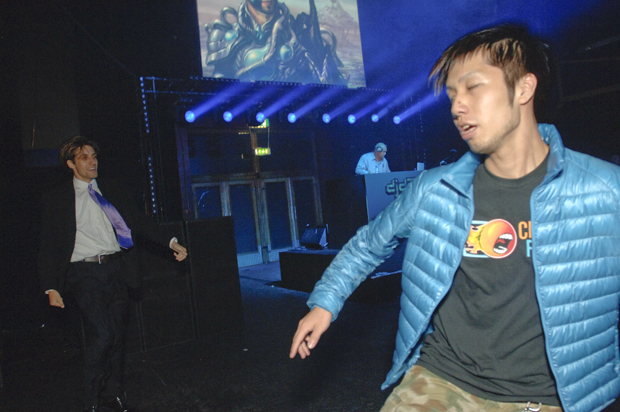 As the evening went on, the room divided into factions—those in support of the Mirran, and those who aligned themselves with the Phyrexians. 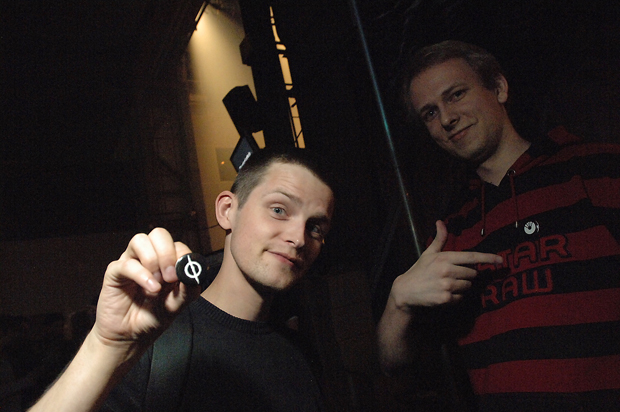 Having taken a simple personality test, it seemed that most judges were on the side of Mirrodin. 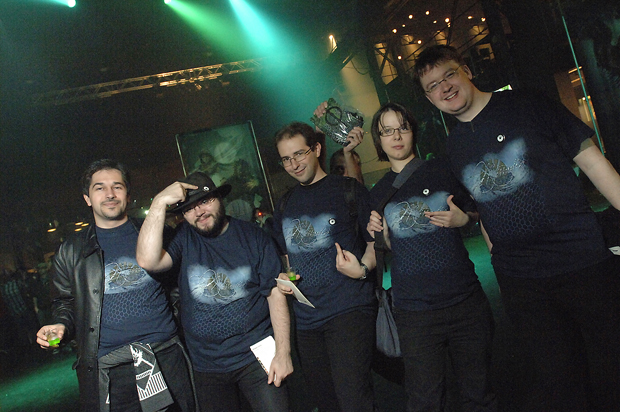 On the other side of things, the coverage team definitely fell under the spell of the Phyrexians. 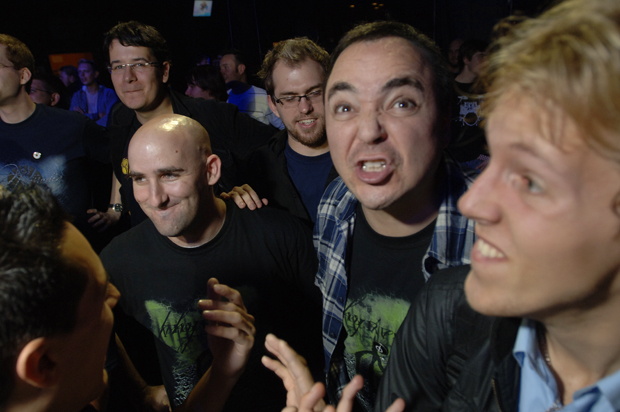 Once we had picked sides, it was time for battle. Each faction had its five champions, determined by their puzzling skills, each of whom had to face off for the glory of their faction. The winning faction would pass on an advantage to those competing at the Seattle side of the party.

Hotly contested, the trivia challenge saw the whole crowd get involved, trying to help or hinder where they could in a raucous race to win mana orbs. After a slow start, a Mirran team featuring Gaudenis Vidugiris, Antonio Faldon, Steve McAleer, Arnaud Bordoux, and Toby Elliott—the Pro Tour's Head Judge!—won back in dramatic style, taking victory for Mirran. 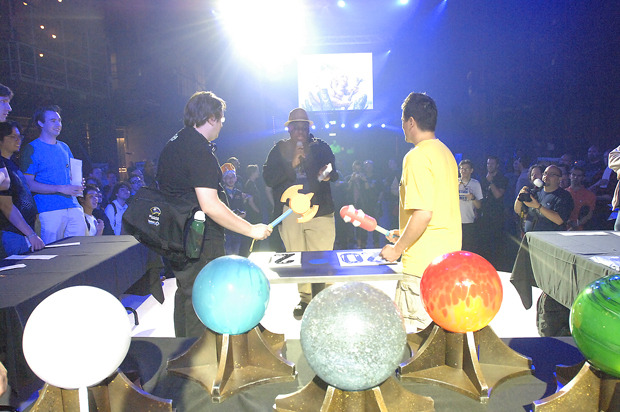 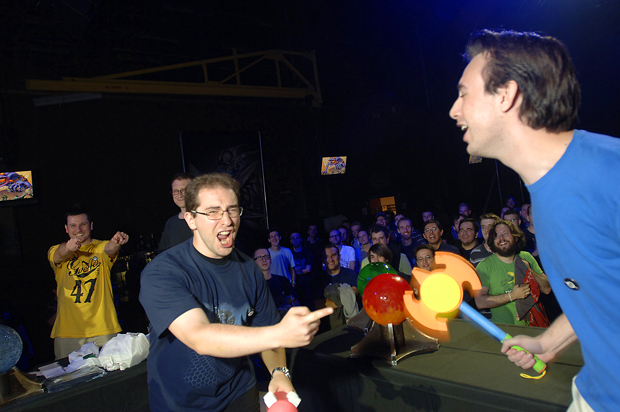 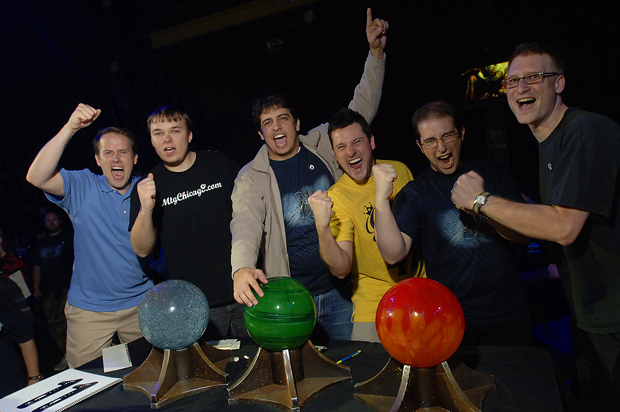 Eating drinking and dancing went on well into the night with everyone who came down to the event having a blast, whether they were here to play the Pro Tour, or one of the many side events going on this weekend.

At the end of the night, there was even swag. It turns out that even Hall of Famers like a few goodies when they leave a party. 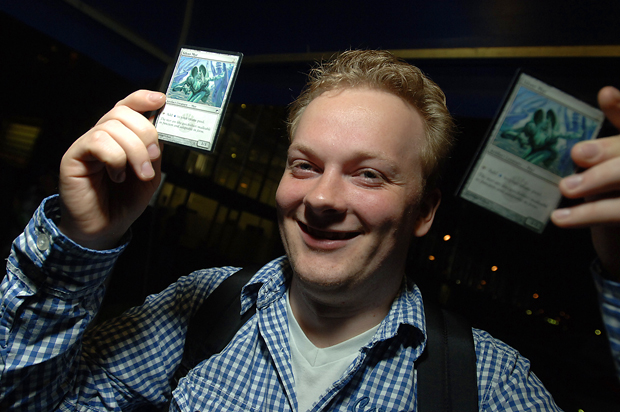