When the full set of Avacyn Restored was spoiled, players were surprised. Where was all the removal? Red gets a sorcery-speed Shock? The Pacifism effect in the set is Defang? Even black has to spend X just to kill a creature?

Things were even stranger on the creature side of things. Just look at Seraph of Dawn. What kind of limited format has a four-mana 2/4 flying lifelink at common? Players' heads were filled with visions of stalled boards culminating in hard-cast Griselbrands. I talked to a couple of experts to see how their play-testing of the Limited format had gone, and if the format was anything like it seemed after a read-through of the spoiler.

First I sought out ChannelFireball's Paulo Vitor Damo da Rosa. "I think the format is pretty fast. You're going to wind up with some slower, clunky games, but it's not like you can just go first-picking eight-drops. For example, this last round, my opponent was Blue-Red with hyper-aggressive tricks and bounce. I'm playing White-Green Soulbond with very efficient creatures. These decks are very fast."

Cards like these don't exactly make for a slow format.

A number of people had said that black was by far the worst color, but he didn't think there was too much to make of it. "For sure black is the weakest color, but draft is naturally self-correcting. You're not going to have three people fighting over it at the table. The real problem with black is its lack of top commons. The only one you want to first pick is Death Wind, so you're rarely going to start out in black. You're going to draft something else and turn to black when there's nothing else."

Here he stopped for a moment, thinking. "That's the other thing. The bad commons, they're really bad. So you can get into this situation where after seven picks you don't get any more playables that pack. This makes it a lot harder to switch out of a color, say in pack two. If you do that, chances are you wind up struggling for playable cards. So more than ever it's really important to know what kind of deck you want to be - fast or slow - and make sure your picks support that."

For another view I sought out Michael Jacob. "Is the format fast? Well, I'm playing three one-mana 1/1s in my deck, and I never do that, so you tell me. Alright, this deck's something of an anomaly. But yes, the format is pretty fast." 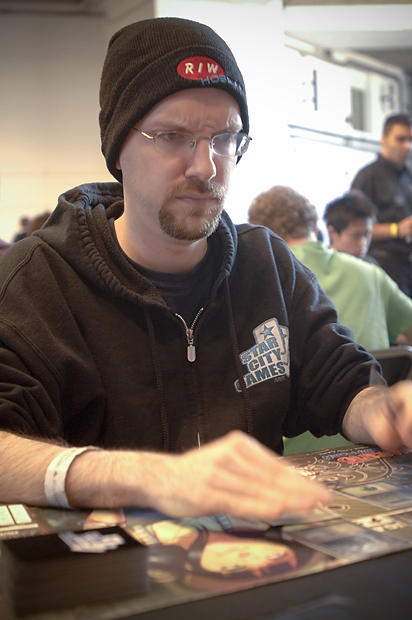 When a deck has three one-mana creatures, it becomes clear that the format may be a little faster than initially anticipated. Don't underestimate the speed of Avacyn Restored Limited.

Jacob put the focus squarely on soulbond. "Look at it this way. They dialed down all the removal to make sure that soulbond would work. The result is that soulbond is fantastic, and that makes decks more aggressive. Wingcrafter is obviously the best, but the green creatures that pump power and toughness, Stonewright, these creatures can just take over. So if you're not one of these aggressive decks, you have to make sure you have the right tools to fight them."

Again, the idea was that you had to understand what your deck was trying to accomplish, and draft accordingly. "People try to draft White-Green because they're used to Travel Preparations decks from Innistrad and Dark Ascension. It doesn't work like that here. There's no reason to draft white for its creatures. If you're playing white, you better have Angelic Wall in your deck. On the other side, look at red. It doesn't have any expensive powerful commons, like Grave Exchange or Voice of the Provinces. So if you're drafting red, you don't want to be a slower deck, as your cards just won't measure up."