Feature: Blurring the Lines Between Beatdown and Control

While there's typically a clear distinction between beatdown decks and control decks in constructed formats, the line that separates aggressive and controlling draft decks can be fairly blurry.

From time to time you will find a single-minded aggressive draft deck or a completely dedicated control deck, but players will often have to stray from their ideal setup a bit so that they can make room for their most powerful cards.

For example, Paul Rietzl (who is now 6-1 after winning his first two draft matches) just drafted a White-Red deck that's capable of some very fast kill... but he also has a Terminus. And while Terminus isn't the kind of card that you would want in an aggressive constructed deck, it's simply too good not to play in Limited.

Would you play Terminus in your aggressive constructed deck? Probably not. But things are a lot different in Limited.

"Terminus is a card that is so potentially powerful (especially if your opponents don't know that you have it) that it's worth deviating from your strategy for it. You can even cater some of your picks specifically for it. For example, I took an Archwing Dragon over a Thunderous Wrath because Archwing Dragon is just so good with Terminus.

When you're hitting your opponent for 4 a turn, they don't have any choice but to commit a bunch of threats to the board so they can try to race you – and at that point you can get a ton of value out of your Terminus."

When asked if he looks to draft aggressive strategies, Paul explained that he is more interested in drafting specific color pairs in Avacyn Restored Booster drafts.

"I don't have enough experience drafting the format to say for sure, but my teammates seem pretty confident that White-Red Humans, Blue-Green Soulbond, and nearly Mono-Black Control are the best decks to draft. So it's not that I have a preference for aggressive or controlling decks in this format, but rather that I'm trying to draft one of several color pairs that happen to have a bunch of inherent synergies." 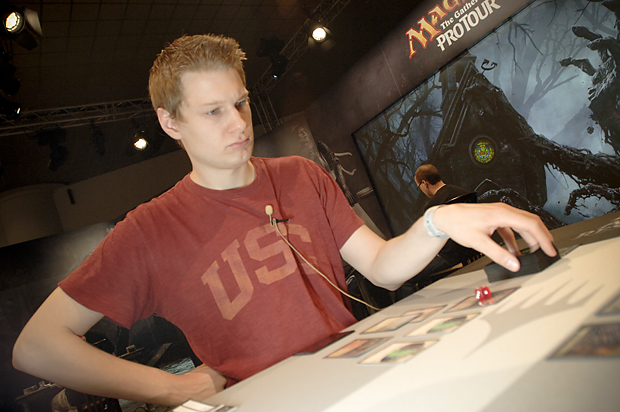 So while you might be tempted to ignore all of the cards that don't directly aid your primary strategy, it's important to recognize when a card is just so good that you need to adjust your draft (even if it's only slightly) so you can make the most of it.