The most popular person in the room on Day 3 at Worlds isn't Conley Woods, who has a 13-0 start, or Louis Scott-Vargas, seemingly the most popular man anywhere Magic players gather. Instead, it has been Christine Sprankle, a college sophomore from Lodi, Calif., who has been playing Magic for all of a year and a half.

That's because Sprankle, an avid cosplayer (short for "costume play"), is decked out in an elaborate outfit that makes her the spitting image of Elspeth, Knight-Errant. 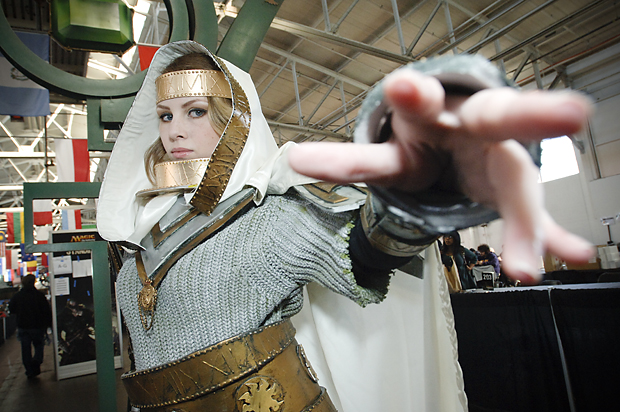 Her costume is such an intricate and accurate replication of Elspeth she can't seem to go more than a few seconds without someone saying "great costume" or asking to take her picture. In fact, I tracked her down simply by following the flashbulbs popping in the middle of the tournament hall.

Elspeth, of course, is a bit of a Magic celebrity, and Sprankle has been getting the star treatment all day.

"It's been awesome," Sprankle said. "I really didn't think it'd get that kind of reception."

She certainly put the work in to garner the reaction. Sprankle said the costume took her two months to put together, which included shaping all of Elspeth's various pieces of armor, sewing parts of the cloak, and painting it to look as authentic as possible.

For Sprankle, who said she is an avid fan of Black-White decks ever since the Orzhov guild in Ravnica block, and that the choice to do Elspeth as her first Magic cosplay was an easy one.

"I wanted to do her because chicks look badass in armor," she said.

But this isn't Sprankle's first attempt at cosplay. She said a random trip to a convention with a friend of hers in 2007 had her immediately hooked on creating and wearing her own costumes from the fantasy genre.

Since then, she said she's been making costumes during that time that included "obscure anime ones" and Princess Peach from various Nintendo games. Sprankle said she was also working on a version of Liliana of the Veil, which she hoped to debut by January.

In the meantime, she's attracted a lot of attention from people who hold Elspeth near and dear to their hearts.

Brian Kibler, who has been known to play many a tournament with Elsepth, Knight-Errant in his deck, took a picture with her and Tweeted his excitement over having Elspeth at the tournament. Sprankle – who only just recently began following coverage of high-level tournaments – wasn't sure who he was until one of her friends pointed out that she was getting her picture taken with "the Elspeth guy." 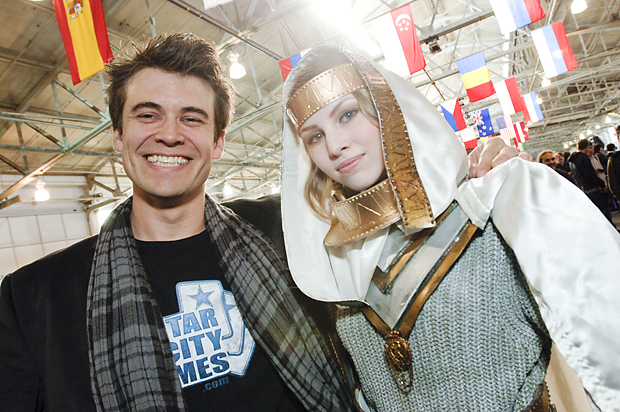 "Elspeth came to watch me win! It's a sign!" -Brian Kibler

She also attracted the attention of Wizards senior art director, Matt Cavotta, who was excited to see some of the game's art come to life.

"It's rewarding to know our work inspires you," Cavotta told Sprankle. 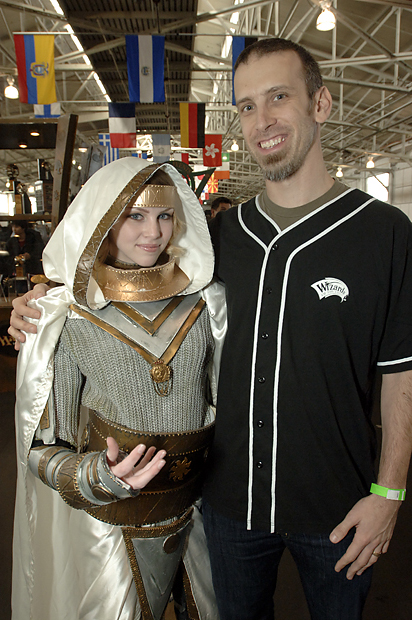 It's inspiring to see fans of the game bring its characters to life.

And if Sprankle herself inspires any future cosplayers to tackle the world of Magic, she has some pretty simple advice.

"Always choose one you like," she said. "Pick one you like and you'll just go the ten extra yards."