weekend marks the first time Team Constructed has been played at a Pro Tour and with the new format comes a new communication policy. For those of you who missed out on the Team Constructed Grand Prix earlier in the year, teammates are not only allowed to chat freely during the course of their matches, but are now also allowed to give brief play advice to their teammates. This new policy is in stark contrast to the Team Limited policy, where players are only allowed to tell each other their match scores and nothing else.

Intrigued about the new direction, I cornered Tournament Manager Scott Larabee and Head Judge Sheldon Menery (who authored the new guidelines) about why the policy changed and how it was working out so far. 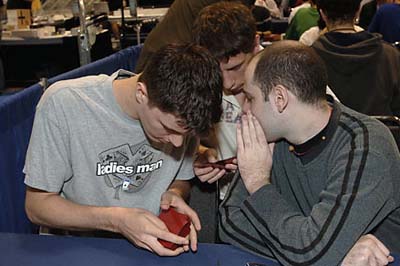 Players could consult each other during play, a new rule to Team action.

What was the impetus behind the new policy? Why did you move away from the Team Limited guidelines for this format?

Well we felt that a "team" event should be more than just the results that three guys put up. In Limited, you get a team feel from building your decks together out of the same pool of cards, but in Constructed you can't really recreate that. All that work is done before the tournament, so we decided we wanted to loosen things up a bit to help create the feeling here that you really are part of the same squad of guys working for a good result.

What does this mean going forward? Can we expect changes in the Team Limited Policy as well?

We're not planning on changing anything regarding that format at this time. Two-Headed Giant Limited already has its own rules and those will be staying the same, but we may look into modifying the rest of the team events depending on how things work out here.

What have been some of the difficulties you have encountered thus far?

This new policy has been remarkably easy to enforce. We gave players a written copy of the rules before the tournament in a number of different languages and they seemed to find them very clear. What is surprising is that it's not delaying the tournament at all. Matches are going to time, but very few of them are going over.

With almost a day and a half under your belts now, do you think the new rules are a success?

I think they are. Players have been good at staying within the rules, and they are also keeping the volume down, which we were a bit surprised by. Overall I think things have gone even better than expected and most of the players that I have discussed this with seem to like the new rules.

Always a hound for gossip and opinion, I decided to ask the players how they think the new policy is working out.

Mark Herberholz
"I don't like it. It slows down the game and judges are not enforcing slow play nearly as well as they should."

Gabe Walls
"I actually like it, but I think the guidelines are still a little too ambiguous and the judges aren't giving out enough penalties."

Kenji Tsumura
"I don't like it. It is much harder to concentrate on what is happening during a match when opponents are constantly talking about their game or their opponent's."

Frank Karsten
"I hate it. You get more draws because people slow down too much, and the difference you see when teams are like one good player and two mediocre players is very large. Sometimes you get the teammate in the middle seat who finishes his match early and then basically plays the rest of time for his teammates - they just end up moving the cards."

And finally, we have the communication policy in its entirety, for those who want to see exactly what it says.

TEAM COMMUNICATION POLICY
A team is more than just three players who add their scores together. A team is a unit, which within certain guidelines enhances each player's abilities and experience and is greater than any one individual.

COMMUNICATION
Players are allowed to communicate with their teammates. Allowable communication includes hand gestures, codes, or referencing written notes from the current match. Written notes may not be brought in from outside the match (this is cheating). Communication with spectators is not allowed. Any player who leaves their table for any reason, or communicates with a spectator on any matter, will be not be allowed to communicate with their teammates for the remainder of the match - and may be removed from the area and penalized. Any player in a match can request a spectator be removed from the area and a judge may penalize a spectator for not leaving.
ADVICE
Players may request and offer advice between their teammates so long as the pace of either of their matches is not slowed. Advice includes, but is not limited to, which cards to play, whether or not to attack, how to proceed with the turn, etc…. When a player solicits advise from a teammate, the general guideline for time allowed will be "asked and answered".
Asked and Answered Example:
Player A: Should I play this [card] on [creature]?
Player B: Yes, my opponent has all [card], so you are likely okay to play that.
SLOW PLAY
Even with communication allowed in a team event, players are still responsible for playing their match at an appropriate pace. Once a player has asked a question of a teammate and received an answer, further discussion may be considered slow play. A few rapid-fire questions and answers may be acceptable. As always, a judge will be the final arbiter of Slow Play.
Rapid Fire Example:
Player A: Should I play this [card] on [creature]?
Player B: No, play [other card].
Player A: But he likely has a counter.
Player B: Ok. Then maybe do X
Further discussion is a debate - its time for Player A to make his decision.
FINISHED MATCHES
Once a player finishes his match, he may remain at the table and observe and advise his teammates' matches. He may move his chair closer to his teammate, so long as this proximity does not hinder his teammate's ability to play. He may not move to a position where he could possibly see his teammate's opponent's hand. He may not move to a position, which will hinder any opponent's ability to play. A player may not leave his chair to become a spectator of his own team, nor may he leave his chair and return. Sit or leave the area, please.
ASSISTANCE IS CHEATING
Players may not perform responsibilities of a teammate or physically assist their play. This includes, but is not limited to; sitting in his seat, performing game actions, manipulating permanents, shuffling, or taking notes of any kind on a match other than their own.
SHUFFLING
A player may shuffle only his own deck and his opponent's, not a teammate's or a teammate's opponents'. Players will shuffle their opponents' decks in a manner so as to not reveal the contents of the deck to their own teammates. Doing so will be considered aggravated Looking at Extra Cards and if deemed intentional or overtly sloppy will be penalized as cheating.
DECKLIST ERRORS
Because of the unified decklist and team deck construction rules, the penalty for Illegal Decklist will be issued to the entire team. This means that each member of the team will receive a game loss for an illegal deck list.
WHEN TO CALL A JUDGE
Anytime you have a question or concern about your game or opponent's action.
Anytime you desire clarification on a card, rule, or policy.
We'd rather help than stand around waiting to sign slips.