Feature: The Couple That Plays Together ....

lorida residents Kitt and Megan Holland are familiar faces for many American Magic players, regular fixtures on both the Grand Prix and Pro Tour circuits. While they are respected high-level players, the young married couple are equally likely to attend an event whether they're qualified or not. Because the Pro Tour has grown to truly emulate a celebration of sorts for Magic, a three-day festival of one of the world's favorite TCGs, I sat down to chat with them about why they love traveling for the game so much.

Kitt was happy to respond to the first question with a smile. "She wants to go to everything," he said, throwing a mock look of disapproval in his wife's direction, "so I have to be the responsible one. We try to combine trips when we can. Like for Worlds in Rome, we grouped it with a trip to see my family in Greece." 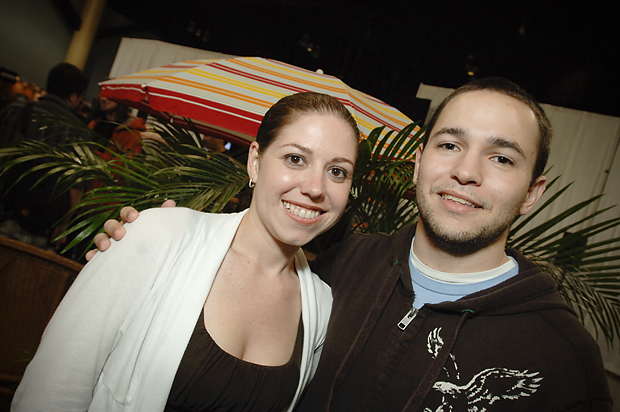 When asked what it is they love about traveling for large Magic events whether they're playing or not, Megan replied "It's about seeing people you don't get to see very often. Players from Europe, Japan." Her husband added "We try to do tourist stuff when we can." Megan pointed out that while they've been in Puerto Rico, for instance, they visited both the rainforest and some of the fortresses in Old Town. "But our main concern," Megan added, "is being at the tournament site."

While the festival atmosphere of places like the Pro Tour provide tons of unique opportunities not afforded at other events (meeting R&D members, previewing Magic books and media, trying out new products like Archenemy early, playing Magic Online and Duels of the Planeswalkers ....), there are tons of public events open to all. "It's nice because it's a lot of extra PTQ opportunities," said Kitt, "but that's not the main concern."

But how did the two get started with the game, and did it play a role in how they got to know one another? "I played briefly around Alliances, and then kind of off and on every summer. I started becoming a more consistent player around Legions," said Kitt.

"We started dating in a December," explained Megan, "and he started playing again about one or two months later. It was new to me then, but it was just something people I liked and who were intelligent played so I liked it. I kind of wanted to impress him too." That brought both a laugh at the brief stroll down memory lane. So how often did they have to play each other?

"He beat me last night!" Megan exclaimed. "I hate losing to him!"

"Yeah, I don't like playing her," Kitt replied, before being interrupted as Megan continued: "He beat me because he topdecked a land for the win." While they might not like playing together, they did point out that because they share cards, even when they're on different teams during team drafts, one of them winds up with something to take home, which they then split. "He beat me, but I still won the Gideon Jura from that draft!" Megan pointed out.

So after years of traveling to Pro Tours, Grand Prix, Nationals, World Championships, and Magic celebrations all over, what were their favorite memories?

For Kitt the answer was easy: "Winning the Draft Challenge [at Worlds] in Memphis. That trip paid for itself!"

And Megan? "Grand Prix–Orlando. It opened my eyes to a whole different experience. We stayed up all night playing cards! It was so much fun."