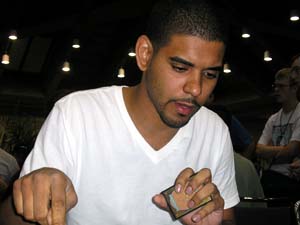 Williams had a frustrating end to Day 1.

One of the most interesting stories so far this weekend is all the old names that came out. I grew bored years ago of the "guy who used to be good but doesn't play as much anymore is in contention for one last Top 8" storyline, but that's not what's going on here. Instead you have a bunch of guys who now make more money playing poker than they ever could hope to playing Magic, but they've realized that the money wasn't why they played the game. They played Magic because it's such a fun game and the lifestyle around the game is good times. So they've decided to keep playing Magic, just for fun.

Williams wrote in his blog last week about how frustrating poker can be and how much he was looking forward to playing Magic for a change. Ben Stark, Jordan Berkowitz, and Gabe Walls all tell similar stories about the role Magic now plays in their lives and they're all here this weekend with smiles on their faces. Yeah, if you have the bankroll to risk and the talent, you can make more money at poker than you can at Magic, but if you're a gamer-for-life like these guys, that's not what life is actually all about.

Dave got off to a great start at 3-1 on Friday. His mtgsecrets.com "Insider" deck put up a 2-1 record, and he might even have beaten Kate Stavola if he had had time to test the Rats matchup and realized how powerful Ink-Eyes could be. (He lost Game 1 when he served with a Bringer and go, was attacked back by a dork that turned into Ink Eyes and stole Black Bringer out of Dave's yard.) It still wasn't a good matchup, though, and 2-1 with a very rogue design seems fine even if he does insist it has good matchups against all the top decks. 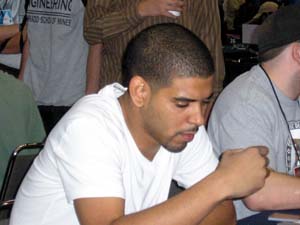 A crowd looked on at Williams' first match Saturday.

Williams then drafted a really tight red-green deck, but didn't get to play nearly as much Magic with it as he would have liked. He won the first match, but then picked up a game loss for misregistering his deck and then quickly lost Game 2 to Bill Stead. He knew he had passed an amazing white deck to Stead, so he wasn't that disappointed by the result and he figured two more wins would still leave him in good shape at 5-2. He was, however, very disappointed when he arrived 30 seconds after Round 6 began. That game loss was followed by a double-mulligan in Game 2 against Eugene Harvey and suddenly he was 3-3. He thought about flying back to Vegas on the spot, but decided to stick around. He had 45 minutes to get off tilt and he figured he came to play Magic, so he should do that for at least one more round. If he won Round 7, he'd still be in Top 8 contention and if he lost, well then hey, at least he got to game and that wouldn't make the flight home taste a little better.

He got the bye.

This was actually the worst result possible as he would have rather gotten to play and lose than not get to play, but oh well. He spent Round 7 cheering on his buddy Neil Reeves, who won to get to 6-1. By Saturday morning Dave had the full smile back on his face and I just watched him draft a nice black-white deck. At a table where I didn't recognize anyone other than Dave, he went Befoul, Befoul, Nagao and never really looked back. He considered red briefly and has a Houndmaster and a Hearth Kami in his board, but for the first half of the draft he was the only white drafter at the entire table, so there were plenty of cards for him. His third pick in Betrayers was also a busty white card (Waxmane Baku) and he got an Okiba-Gang and a Horobi's Whisper despite all the competition for black.

There's one busty double Earthshaker deck on the other side of the table, but other than that Dave looks to be in great shape to perhaps sweep this pod and start summoning Bringers and casting Enduring Ideal with the Top 8 - and a much coveted berth on the National team - still very much in his sites.