Feature: The DCI Does Digital 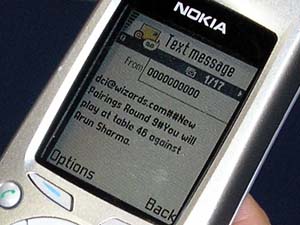 word "technology" gets tossed around quite a bit in these circles, and it usually refers to advancements in deck building within a metagame. Not this time; this article deals with an actual technological advance that impacts players here at the Pro Tour.

Wizards of the Coast's Organized Play department has been working for the past year or so with an electronic messaging service to provide information to DCI members over their cell phones. The project, spearheaded by OP Logistics and Operations Director R.E. Dalrymple, already successfully gives players weekly updates whenever their ratings are updated, and is now being used on a smaller scale to give players their pairings and standings at the beginning of each round.

Only about 40 players are using the service at this event--most didn't bother to read the disclaimer at registration--but those that did have found it to be quite helpful, and many other players are wishing they had signed up for it.

The service, still in "trial mode," had a few glitches on Day 1, "…but now it works great," said Atlanta professional Sol Malka (pictured), "You don't have to fight the herd."

Any player that has braved the waters of large-scale Magic tournaments can relate to the discomfort of being swept up in a throng of players crammed around the standings board each round to see where they should be sitting. The text-message service alleviates that problem, allowing users to find their opponents quickly and easily without going near the stampede. 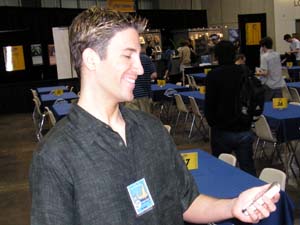 OP Data Systems Manager Didier Monin, here at the Pro Tour as the official scorekeeper, cautions that the text messaging service is still being tested. It stopped working yesterday because the system couldn't recognize a special character in a European player's name (he believes it was a 'Z' with little eyebrows). The service also only works for cell phone providers in the US and parts of Canada, but research is being done regarding bringing it to European and Japanese players as well.

The biggest prohibitive factor may be the cost of the service, but if Wizards can work a deal out, players and Tournament Organizers alike may soon be able to have pairings and standings sent to them for each round at every large event, including Pro Tours, Grand Prix, States, Regionals, and Prereleases.