Ah Elves, favored deck of children and Pro Tour winners alike (Dirk Baberowski loves an Elf deck nearly as much as he loves German soccer player Mehmet Scholl, which is to say, a whole lot), the archetype of small green creatures returned with a vengeance here this weekend. In fact, Elves turned out to be the second most popular archetype here this weekend, so I figured it was time to settle in and take a look at a couple of builds that are performing well so far in the tournament.

The first comes from Charlie "The Kid" Gindy. Gindy, mostly known as a Team Limited specialist, took an extended hiatus from Magic to chase girls for a few years, but won a PTQ for this format and did a bunch of testing on Magic Online prior to the event. I caught up with him after he had just defeated Hall of Famer Zvi Mowshowitz to extend his record to 10-3 on the weekend. Since then, he’s cinched a place in the Top 8. 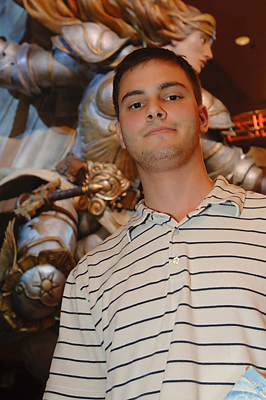 What is the plan? "You just want to cast Elves, use good removal to get blockers out of the way, and smash face with either Garruk Wildspeaker or Profane Command. The deck is very Rock-like."

What are the key cards? Profane Command, Wren’s Run Vanquisher, and Chameleon Colossus. "I was testing some builds I found online and there was one I liked that didn’t have the Colossus in the main. I swapped those in and suddenly the deck was very good and very consistent."

Does it beat Faeries? "I’m 2-2 on the weekend thus far. Game 1 is not great, but you do get five very strong cards out of the sideboard (Cloudthreshers and Squall Lines). I may need to put one more Squall Line in there, though."

How does it do against the rest of the field? "It’s very good against the green decks—Profane Command is insane there. Goblins and most of the red decks you smash, and it’s even competitive against Reveillark—it depends on how fast their draw is.

Why would you play this and would you make any changes? "I wanted to play something I knew was solid that would give me a good chance to Top 16 if I played well and I really wanted to avoid playing Faerie mirror matches all day long. I won a couple of Premiere Events on Magic Online with it, so I was also very comfortable playing this deck for an extended period of time. The main deck is perfect, but you might need that one more Squall Line in the board."

Now compare Gindy’s build with the following deck designed by Jelger Wiegersma, and piloted by Ruud Waarmenhoven deep into Day 2. Both are Elves, but they play very differently. 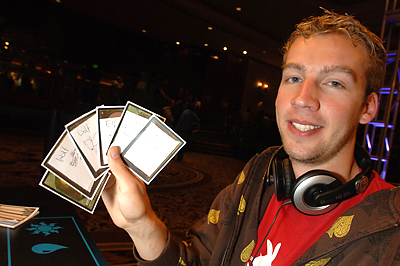 What are the key cards? "Wren’s Run Vanquisher and Imperious Prefect are the most important ones, while Elvish Champion is so good against other green decks."

Does It Beat Faeries? "It does. That’s why we played it. 2 Squall Lines main plus Jagged-Scar Archers make it tough for them, especially because we can race."

How does it do against the rest of the field? "It can lose to the Mono-Red builds that are more controlling and really doesn’t like Damnation and Sulfurous Blast. Fish and the other aggro decks are usually pretty good matchups, but like most aggro decks, Reveillark is very bad."

Why would you play this and would you make any changes? "We knew there would be lots of Faerie decks running around, and it’s a lot of fun to play. If I had to do it again though, I’d cut some Elvish Champs from the main and play Riftsweepers instead."