Stuart Wright is one of those Pro Tour players who always seems to create great, original decks but never quite does well enough with them to get his name noticed by the community as a whole. Regardless, it’s good to check in with him at almost every new Constructed event because you are bound to see some ideas that you may never have considered actually in play. His latest creation looks like this: 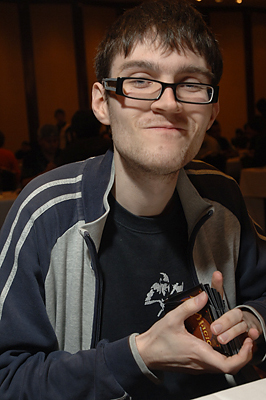 Plan: It’s like a Grave Pact deck without the Pact. The idea is just to play lots of tokens and things that benefit from having a bunch of creatures on the board. The concept is simple, but the synergies in the deck make it complicated and powerful to play.

What are the key cards? Mogg War Marshal, Magus of the Moon, and Furystoke Giant are all keys. Unlike previous decks in this vein (think Ghost Husk from Pro Tour–Honolulu, Nantuko Husk is in here mostly for beats and to block opposing fatties.

Does it beat Faeries? It’s not amazing, but it’s over 50 percent. The maindeck Magus of the Moon and Shadow Guildmage makes it hard for them.

How does it do against the rest of the field? Solid. It loses to decks like Reveillark and other combo decks, but Faeries should keep those decks in check. It has a very solid matchup against aggro beatdown style decks.

Why play it? “It’s a well-tuned deck that has a lot of synergy to it, Instead of just a bunch of good cards lumped together, you feel like you have a real deck. And it’s those synergies that make it powerful and fun to play.”