The longer I play Magic and the more I begin to understand the various elements that make it what it is (thank you Mark Rosewater, Devin Low, and Doug Beyer for your incredible articles), the more I truly appreciate the opportunities I get to spend time speaking to the people responsible for the game I love. Ken Nagle has been a member of Magic‘s R&D team for about a year now, first proving his skills as a member of the Great Designer Search. His first contributions to Magic design came in Lorwyn, helping create filler to complete the set. Apparently, he impressed the heads of the design department enough that they were willing to give him a spot on the Morningtide design team. You know Weight of Conscience? That’s one of Ken’s. Boldwyr Heavyweights? Yup, that’s a Nagle design also. If you get the chance, you should really check out his First Ever Design Article.

I’m always on the lookout for new views and directions in which we can stretch our coverage to entertain more people. We focus so much effort on the main event because that’s where the big boys and big money are, but with literally hundreds of games of Magic happening simultaneously in the building at any given time, that challenge is daunting. 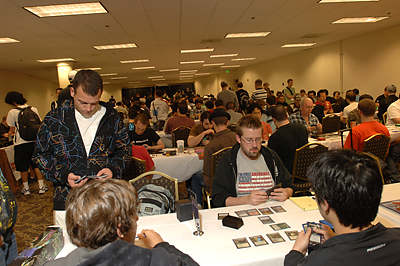 A look inside the other half of the Hollywood scene -- the Public Events hall.

However, Ken brought up a point I’ve been thinking about a bunch recently: “There isn’t enough coverage on the other things going on at the Pro Tours.”

Here at the Pro Tour, there is an overwhelming amount of information that we have to try to get across to all of you. Our goal as coverage writers is twofold. We aspire to educate our audience, as well as entertain. We cover issues that are important to the event, like the metagame breakdown (which is incredibly time consuming, so you all know); checking in with deck designers to learn about how the big decks in the format are built, played, and perform in certain matchups; as well as trying to inform people about how they can improve their game to get themselves into the big dance. We also try to entertain people with fun stories we’ve heard or seen. Feature matches are intended to both entertain the reader with as lifelike a picture of the match as we can provide with these little symbols, as well as providing play-by-play to show you how the top players in the game play their decks and react to the situations they face. We have all of this to get across to you all, and it’s only one event.

Right across the hall from the main tournament hall is our Public Events hall. This is where the PTQ’s, drafts, Constructed tournaments, and many other events take place. At any given time, there are more than twice as many players in this room than there are in the Pro Tour hall. The queues here fire so fast that Magic Online blushes. There’s always something to do. There are innumerable events going at the same time, from the eight-player drafts to the 190-player Super Friday Night Magic tournament. There really is something for everyone.

Even outside of the Public Events hall, there are a million things to do. The lines leading up to the artists’ area are always full, even when the artists are on break. The crowd around the Gunslinging area requires a machete to traverse. Despite the abundance of tables, it can get difficult to cross the hall without tripping over a player sitting crosslegged in front of a monster box. It’s a prerelease atmosphere with the biggest names in Magic attending. How appropriate that we’re in Hollywood, where you can run into Paris Hilton in Del Taco, or pump gas across from Christopher Walken. 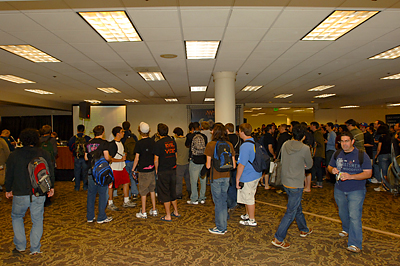 The crowds are thick as players look for their most recent pairings, standings, and Public Events schedule.

I’ve been to eight Pro Tours now, and never once has it been as a player in the main event. I am not the world’s best Magic player, but that’s never stopped me from playing it. It seems to me that there’s a common conception that Pro Tours only exist for the sake of those players qualified to play. If that were true, why would Wizards go to all the trouble of making an awesome atmosphere for gamers of all shapes and sizes? Why would they get such an enormous venue to cater solely to the 300 or so players that qualified for the PT? Hell, why run open events during the first few rounds of Day One play if everyone who’s qualified is playing in the Pro Tour?

The simple answer is that Wizards has gone to great lengths to make sure that the Pro Tour has a welcoming atmosphere to all players. They want you to come to the Pro Tour to play Magic and watch the game being played at its highest level. It gives players who just want to play casually a place to convene and battle with their Elder Dragon Highlander decks (I’m halfway through building mine now. Go Vorosh!). It gives players that are trying to make their way into the Pro Tour a place to observe, play, and learn. Nothing will teach you better than watching the best players in the world from close enough to touch them.

I guess the real point I’ve been trying to make here is that the Pro Tour shouldn’t be regarded as a tournament—it’s an event. It’s more than just an opportunity for professional players to come vie for a prize. It’s an opportunity for players of all makes, desires, and skill levels to converge for four days of perpetual gaming bliss. The events always take place in areas that make for great getaways, too. We’re in Hollywood! I’m spending at least one day out on Ventura Beach, and am definitely heading down for an evening stroll on the 3rd St. promenade. Pro Tour–Berlin takes place during Oktoberfest. Valencia is effectively the San Diego of Spain. These are locations that everyone can enjoy even if Magic isn’t involved. But it is. Chocolate-coated chocolate. 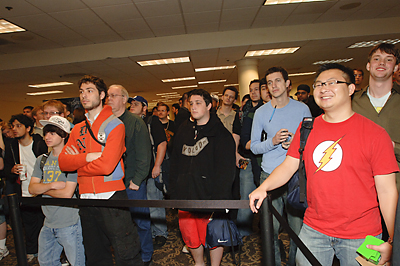 Pick an event type, and it’s likely you’ll be able to play it in a Pro Tour’s Public Events space.

A Magic designer’s goal is to find new and exciting things to do, while still preserving the integrity of the game. They toil hard to come up with inventive ways to keep players interested in the game. The biggest tool they have available to them is all of you: the players. You are the target audience. Without players to use the cards, there’s no reason to make them. Your feedback helps shape mechanics, set themes, and even individual card design. You are the design team’s muse. Speaking with designers and reading about design has gotten me to start thinking about coverage in much the same manner. We don’t write for ourselves—we write for you. Without readers, these words are just symbols on a page.

We have two top-level events left this year: Pro Tour–Berlin and Worlds. In order to better give you the information you are looking for, I’d like a little feedback from all of you. What do you want to read about? What are your favorite and least favorite parts of the coverage? What are we doing well? Our coverage technique is something that I don’t think has enough light shed on it, and I’d like to change that. So sound off! Head to the forums and voice your opinions. Remember, this coverage is for you. So, what do you want to hear?