full block draft being available for about six weeks now, there is still some disagreement about the pick orders for certain cards. In fact, many players, especially those who took part in the recent Magic Online beta test, felt that their opponents in Thursday's practice drafts still had much to learn about the format. I've tracked down the pros and asked them their opinions on some of the more hotly debated dilemmas.

I had no idea that this was even a question until this weekend, when I was informed that many of the Americans are now favoring the 3/2 ninja over the powerful removal spell. When I talked to Osyp Lebedowicz, he admitted that a week ago he had been favoring the Gang, but then realized that was crazy and reverted to his original line of thought. Eugene Harvey and Mark Herberholz both concurred, as did all of the Europeans I could find: Olivier Ruel, Ruud Warmenhoven, and Jeroen Remie. 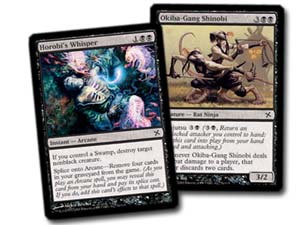 Sam Gomersall was the first to stray from the pack a little when he said that if he had a Befoul he would take the ninja, but otherwise he needed the Whisper. Richard Hoaen had a similar response, saying that "90 percent of the time Whisper is correct but in this deck I have right now I should have taken the Gang."

Adam Chambers confidently gave the nod to the Gang. "Whisper is just another Terror, but you can't lose when you have a Gang." I mentioned that the splice on Whisper made it a little more than that, but he dismissed that, saying, "don't be fooled by the dream, you never actually splice it."

Paul Rietzl backed him up, saying, "I think Whisper is the better card, but given the way you should draft black in this format, you always end up wishing you had a Gang instead."

When I asked Tim Aten if he thought the Gang was better, he responded with an incredulous look and "I was the one who made that up." Alright then.

Elder Pine of Jukai vs. Shinen of Life's Roar

Elder Pine received a lot of press when Saviors first came out, with its powerful ability thinning decks, filling up hands, and winning games across the world. Sam Gomersall, draft specialist, went so far as to say he'd splash a couple into non-green decks, although I'm not sure he was quite serious. In recent days though, Shinen of Life's Roar has been sneaking onto the scene, with a lot of players not quite sure which is the better card anymore. 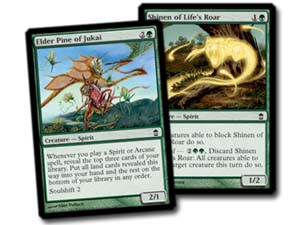 Osyp, when queried, answered "Shinen obviously, but it was close a week ago." Eugene wasn't quite as sure, responding, "No clue, but right now it's the Shinen, it's won me so many games recently." Jeroen also agreed, as did Sam, who's apparently come around since his set review. Well, he said that it depends on your deck, but that in most cases it's the Shinen that would find its way into his pile.

Mark Herberholz straddled the fence, saying that the two cards are completely even but that he'd take the Elder Pine because "the Shinen is underrated, so it comes around and you get it later."

And then there's the old guard, the players who are still backing the Elder Pine. Since it's still the generally accepted belief, most of them didn't give a specific reason, so I'll just list some names here: Adam Chambers, Tim Aten, Olivier and Antoine Ruel, and Jeroen Remie.

This one wasn't as much of a dilemma as I was hoping, with only Adam Chambers and, well, myself on the side of the Sniper. Our argument is basically that, while Gnarled Mass is very good, it's not doing anything that green necessarily needs help with. It's just big, but you can easily use Kami of the Hunt or Elder Pine to fill that slot. The Sniper, on the other hand, can single-handedly turn an unwinnable matchup into a complete rout as he taps down two fliers a turn. In a format where there aren't any good spiders, or effects that let you block fliers, the Sniper's ability is sorely needed and I think it's actually the right pick, even if you sometimes have to side out.

Everyone else was of course on the side of Gnarled Mass.

With Saviors introducing a number of cards that care about hand size, it's become a lot more tempting to draw first in a format where pros traditionally choose to play. There was no actually real consensus here, so I'll just list out the answers:

Lebedowicz: "I'll usually play, but it depends on your deck."

Harvey: "I choose to play, but I'm never unhappy about drawing. It's pretty even in this format. If you don't have removal you have to play though."

Herberholz: "Obviously play. Sometimes I'll draw though; if I have a deck with three colors and some bombs yesterday, or with a couple of counterspells, then I'll choose to go second."

Chambers: "I always choose to draw, although I tend to play decks where that's a good idea."

Gomersall: "Almost always play. I'd have to have three Akki Underlings in my deck before I'd choose to draw."

Frank Karsten: "It's totally even in this format. Usually I'll just roll a die, then if I win that, I'll roll another to see if I play or draw."

Aten: "I choose to play about 70 percent of the time."

Ruud Warmenhoven: "Hmm, tough one. I'll draw if I ever have a good reason. Basically if I think I can convince my friends that it was right to draw, then I will."

And my personal favorite answer, from Olivier Ruel: "Play, and then draw into Top 8."

So there's quite the mix of opinions, but the overarching conclusion was that the play/draw decision is actually quite fair in this format. It's not a big deal who wins the die roll and players tend to be happy either way. I know I've played a couple matches recently where each player wanted a different result, so we just agreed without even bothering to roll. It's quite possible that's happening at this Pro Tour as well.