now we hope you've thoroughly reviewed the Top 8 draft with our new Draft Viewer and come to your own conclusions about the picks. Our coverage team was lurking behind the players during the Top 8 draft and here are some of their observations: 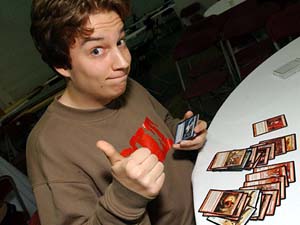 Geoffrey Siron had reason to be excited after the draft.

Masashi Oiso was always going to have a major effect on the draft table and the outcome of this Top 8, but what happened here was probably not what anyone expected. When Oiso passed Gutwrencher Oni early in pack 1, Antti Malin hopped into black with both feet, figuring the color was open - it wasn't. That meant both Oiso and Malin were in black from that point on, but what they did not know was that Johan Sadeghpour was also in black, making it three black drafters in a row. This crushed Oiso's deck in Betrayers, while he paid them back in Saviors, weakening that whole string of decks more than a normal table (though to be fair Malin has a reasonable pile of cards.

On the other side, Tomi Walamies opened Keiga, the Tide Star and then picked up Kami of the Hunt in pack 2, looking to go into his favored green-blue archetype. The only problem with that plan was that Tsuyoshi Fujita was drafting the exact same archetype two spots in front of him, gobbling up all the goodies and leaving Tomi with the dregs for two straight packs. This was made all the worse because David Larsson was in white-green directly behind him, and Arnost Zidek was in blue-black behind him, cutting Tomi off from two of the weaker colors in the block from both sides. Walamies's deck isn't terrible, but it's not something you'd look at and predict a 3-0, which is exactly what he needs to walk away with his first Pro Tour title. 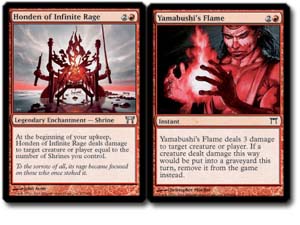 In my opinion, this draft was very much decided by an absolute lack of good red cards in pack 1. In a typical draft, three or four players might first-pick red cards, but in this one there were only two that are even worth nothing: the Honden of Infinite Rage in Siron's pack and the Yamabushi's Flame in Fujita's, sitting to his right. This could have been disastrous for Siron, but instead it was perfect, because Fujita took Soratami Mirror-Guard over the burn spell and suddenly Siron was the only player with any incentive to draft red cards.

The Cunning Bandit in pack 2 had a chance to send someone, especially Oiso, into red but no one was quite willing to commit to a double red spell. By the time Saviors rolled around, with its three Barrel Down Sokenzans, Ghost-Lit Raider, Undying Flames, and two Spiraling Embers, Siron was reaping the rewards of being alone in the color. Oiso, on the other hand, was trying to salvage a draft gone sour. In Betrayers, black had been cut off by both Antti and Johan to his left, and multiple first-pick black cards were snatched right before they could make their way into his pile. In the other two packs, Arnost Zidek was drafting black as well to his right.

Siron had an amazing draft, with perhaps the only regrettable pick being Descendant of Kiyomaro over Barrel Down Sokenzan in pack 3. He wasn't able to play the Descendant due to its heavy white requirement, but a third Barrel certainly would have been welcome in his deck. Oiso's, on the other hand, was a mess all the way through and he ended up three colors with all the drawbacks and none of the rewards.

For the finals draft I watched over the shoulder of Czech player Arnost Zidek. In case you didn't read our interview with him, we knew going in that he'd be looking to draft some combination of blue if at all possible, so I was really looking forward to seeing how it came out. Though I was only able to see this corner of the draft, it turned out to be fascinating. In particular, the first and second pick led to a very interesting situation. Zidek's first pack featured Teller of Tales, along with Kodama's Might, Sosuke, and Rend Spirit. Zidek of course took the Teller, and then faced an interesting choice with his second pick. 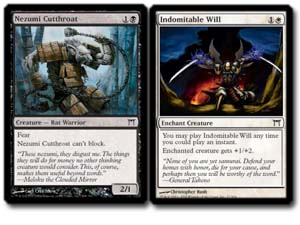 For this one, the options were Cloudskater, Scuttling Death, Nezumi Ronin, Nezumi Cutthroat, and Indomitable Will. With so many black cards, and right on the heels of sending over a Rend Spirit, I suspect that many drafters in the position would consider taking the Indomitable Will, with the hopes of setting up a war over black on the left -- making it that much more likely your own deck would be uncontested for colors, and hopefully weakening some of the other competitors' decks in the process.

But Arnost went with the Cutthroat instead, which I admit surprised me. I had a chance to sit down with him afterward, and he explained that he didn't mind if he was cut off from black on the left.

"Who cares about black in Betrayers?" he said. "Aside from Whisper and Okiba-Gang Shinobi there isn't much. All I care about is cutting off the good blue, because that's where I'll get paid off. Cloudskater is good, but not second pick quality, and Cutthroat is just a better card than Indomitable Will."

As Tomi Walamies later pointed out in the webcast coverage during the semifinals, to truly succeed at this level, you have to be able to bring something else beyond just the regular picks and strategies. One of my favorite things about Magic is how two people can have wildly different opinions, but both can be right because of the way they play accordingly.