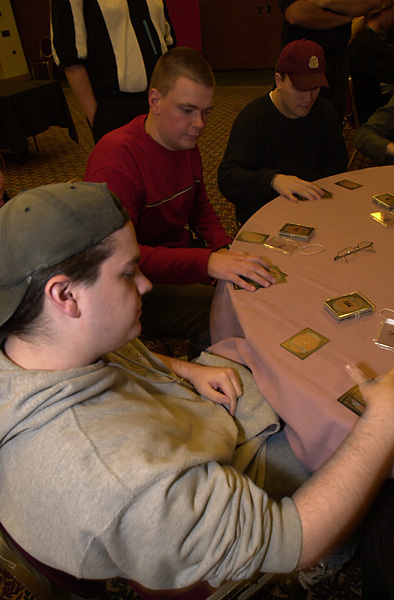 In the first Masters draft, Sigurd Eskeland and Mike Bregoli drafted at the same table. Bregoli was sitting to Eskeland's right, feeding him during the first and third pack. Stephan Valkyser was sitting to Bregoli's right, while Eskeland had Joe Weber to his left.

Bregoli opened a pack that contained a couple of possible first picks - an Annihilate, a Tribal Flames, a Thornscape Apprentice and a Plague Spores. He chose the Annihilate. Meanwhile, Sigurd's pack held a Phyrexian Infiltrator and a Plague Spores, and the Norwegian chose the Spores, committing himself to red and black. He then picked up the second Spores while Bregoli went into blue and white after taking a Teferi's Moat.

Bregoli continued picking up blue and white cards. He took a Galina's Knight, then a colorless Alloy Golem and an Opt. Sigurd got a Keldon Necropolis for his deck, and he then took a Fires of Yavimaya out of a pretty weak pack for him. Sigurd followed up on the green by taking a Wallop, suggesting that he might splash green. He also picked up a Phyrexian Battleflies and a Kavu Aggressor.

Meanwhile, the packs started getting weaker for Bregoli. He didn't get any really strong creatures, but picked up a Prison Barricade that could help him on the defense. He also got a few library manipulation cards and a few weenies, but all in all, he didn't get a lot of good cards out of the rest of the packs. Sigurd got an Aggressive Urge and a Backlash and some other random cards.

Eskeland opened two pretty good blue/black cards in his second pack; a Recoil and a Sleeper's Robe. Not into blue though, he took an Exotic Curse. Bregoli picked up a Shackles in his first pack, and went further into the white/blue strategy. When he saw the two blue/black cards though, he chose the Robe, which suggested that he would play three colors.

Eskeland's following picks were pretty decent. He got a Tribal Flames as his second pick, then he took a Shivan Zombie, a Soul Burn and another Tribal Flames. Meanwhile, Bregoli did indeed go for the three-color strategy. He took a Repulse, a Probe, a Recoil and a Vodalian Zombie, all strong cards for his deck. His following picks included a Wash Out, a second Prison Barricade and a Vodalian Merchant, but nothing more spectacular. Eskeland's notable picks were a Ravenous Rats, a Cauldron Dance and a Phyrexian Battleflies.

Both players were kind of light on creatures before the last pack, and Eskeland started drafting creatures. He opened a Shivan Emissary, and then he got a Pouncing Kavu, a Spur Grappler, a Hooded Kavu and a Loafing Giant. Bregoli opened an Urborg Drake, a Razorfoot Griffin and a Probe, but he chose to take his second Probe. He then took an Exotic Curse before getting a really bad third pack. There were some strong picks in the pack, just not in his colors - so the Noble Panther and the Thornscape Apprentice were passed on while Bregoli took a Tribal Flames that would have been passed on to Eskeland if there had been a decent pick in the pack. Bregoli then picked up an Attendant and a Razorfoot Griffin before he was passed a second Teferi's Moat, which he happily took.

Eskeland continued picking up a few playable creatures, and he ended up playing a red and black with two islands to be able to abuse the Nightscape Apprentice/Shivan Emissary combo. The deck he registered had solid creatures and quite a few removal spells and a Soul Burn. Bregoli ended up with a black, white and blue control deck. Even with two Teferi's Moats, the deck had quite a few creatures that could finish an opponent off, and also enough removal to Moat lock a player without a lot of flyers.