n the first Sunday draft prior to Round 13, draft table #3 looked more like a draft table #1. Kenji Tsumura and Yuuta Hirosawa set up with Kai/Ikeda on their right and Kaji/Saito to their right, with Thaler/Pils finishing off the table. When I saw this team play yesterday, they had taken half a step into Slivers, with Sedge Sliver and Homing Sliver to tutor for him bringing a lot of Slivers in their wake. Would he take a similar half-step, or perhaps go farther? Tsumura is widely considered one of the great Magic minds of our time, and I was anticipating learning from a master.

Pick 3 showed a third Bonesplitter Siver, plus Opaline Sliver, Greenseeker and Snapback. The Japanese snapped back the Snapback, then weighed Greenseeker vs. Bonesplitter. The Greenseeker would be of more value to them, but if a single team cornered the market on all three Bonesplitters, Spined Sliver, Watcher Sliver, and Shadow Sliver, all revealed by just the first three packs, things could get ugly. They took Bonesplitter next. If something like a Sedge Sliver showed up, they always had the option to dally. 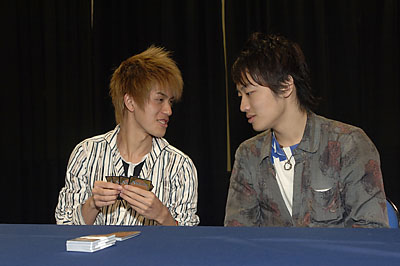 Kenji and Hirosawa have proven over the weekend that they can work smoothly as a team.

By Pick 5, Spined Sliver, Ashcoat Bear, Weathered Bodyguards and Amrou Seekers had made it back around. Spined Sliver and Amrou Seekers dove into the pile, keeping the window open for slivers down the line. The remnants of the pack added Shadow Sliver, Blazing Blade Askari, Screeching Sliver, and Tectonic Fiend.

Pick 3 continued this draft's theme of tons of awesome Slivers all over the pack. Oh, what could have been…Trespasser il-Vec, Watcher Sliver, Telekinetic Sliver, Shadow Sliver, Flowstone Channeler, and Spike Tiller. Having essentially abandoned the Slivers, Tsumura and Hirosawa took Flowstone Channeler and the Spike.

The rest of the pack provided Dream Stalker, Assassinate and Aether Web as the cards that made their decks.

Pick 3 provided an incredible-in-2HG Mire Boa and its enemy Midnight Charm. In Pick 4, they took Needlepeak Spider, then chose the "you get more mana" removal, Utopia Vow, over the "we get less mana" Melancholy.

By Pick 5, the Blood Knight had tabled and jumped into their pile, followed by Amrou Seekers-wannabe Skirk Shaman. The rest of the picks had dried up.

At the halfway mark in the draft, Hirosawa's deck sketch seemed very light on cards, having just Sulfurous Blast and some good two-drops, but not 50% of the cards to make a deckist, and he would need more attention in the second half of the draft. Kenji was on track to assembling a powerful blue-black removal machine. Meanwhile, Kai/Ikeda on their right had picked up Sacred Mesa and double Celestial Crusader, and it looks like they were considering building one deck as entirely white, no doubt assisted by Tsumura/Hirosawa avoiding white altogether.

The judge gave the command, and the second Planar Chaos pack began. The powerful pack included Veiling Oddit, Sulfur Elemental, 2HG superstar Essence Warden, Shaper Parasite, and the one-mana-removal trio of Sunlance, Piracy Charm, Midnight Charm. The team considered Sulfur Elemental and Essence Warden for a long time, but finally went with Shaper Parasite and Veiling Oddity. Despite the Oddity's greatly improved value in 2HG, I was surprised by the pick of the suspend Illusion over Essence Warden. But because it was Kenji, I tried to expand my mind to follow his reasoning and learn from him. I'm sure that part of the reason was Kenji's paucity of two-drops so far.

In Pick 2, Pouncing Wurm and Utopia Vow were easy picks over Melancholy and Reflex Sliver. Pick 3 gave them Blood Knight and Gossamer Phantasm and continued the "Packed with Slivery goodness" theme with Poultice, Reflex, and Spitting Slivers, a higher frequency of the good common Slivers than most drafts.

As Future Sight became the present, the first pick showed Whip-Spine Drake, Aven Augur, Fatal Attraction, Foresee, Magus of the Abyss, and Nessian Courser. Hirosawa was excited about the Abyss, which doubles in effect in 2HG, but Kenji waved his hand and shunned both Abyss and Whip-Spine Drake to first-pick straight card advantage and removal, in Fatal Attraction and Foresee.

For the second pick, Kenji took Grave Scrabbler and Sporoloth Ancient. Knowing the team wouldn't play white helped them ignore Seht's Tiger and Knight of Sursi. At the third pick, Kenji and Yuuta were definitely taking Imperiosaur, but Llanowar Empath, Deepcavern Imp, and Edge of Autumn jostled for second place. With multiple dark Witherings and a Grave Scrabbler, the Deepcavern Imp's discard "drawback" was too good to pass up.

I glanced at the Germans during the review period, and saw Florian Pils assembling a fast beatdown strategy with Shade of Trokair, Knight of Sursi, Essence Warden, 2 Sinew Sliver, 2 Ashcoat Bear, 2 Whitemane Lion, 2 Thrill of the Hunt, and Serra Avenger. If Thaler is just as beatdown-focused, they could be trying to turn the tables on the slower Foresee-based strategies of their opponents.

The final pack of the draft began. The madness-enabling Gathan Raiders and Death Rattle were an easy pick over Pact of the Titan and Edge of Autumn. The next pick was a lot tougher, with Deepcavern Imp and Edge of Autumn fighting to accompany the powerful Sprout Swarm into the pile. The duo had picked both Imp and Edge earlier in the draft, and this was a question of curves, numbers, and deck needs. Edge of Autumn won the fight.

The third pick donated another Edge of Autumn as well as a card that got Tsumura and Hirosawa excitedly chattering: Gibbering Descent. The rare enchantment doubles in effect in Two-Headed Giant, hitting the opposing team for two cards and 2 life a turn. They could get it out cheaply and on-curve with discard enablers like Gathan Raiders and Deepcavern Imp, or they can use the Descent itself to play out their other madness cards like Dark Withering. Interestingly, you can also do something with Descent in 2HG that you can't do with in one-on-one. If Kenji controls Gibbering Descent and is hellbent with no cards, his whole team can skip its upkeep and thus skip Descent's negative effects, while Yuuta can still hold cards and even build them up without discarding to Descent. Second Wind wrapped up the playable cards, and the draft was over.

I watched Kenji and Yuuta build their decks. Kenji's blue-black was packed with card advantage, with Haunting Hymm, Gibbering Descet, Foresee, 2 Grave Scrabblers, 2 Shaper Parasites, Dream Stalker to run those again, Gibbering Descent, and Looter il-Kor with Madness cards. One of the 3 Midnight Charms got cut, as did one of the 3 Grave Scrabblers. After seeing Finkel's 2HG madness deck "go off" with 3 Grave Scrabblers and some looters, I asked Kenji why he cut one Grave Scrabbler, even though he liked them enough to run 2. He explained that although he has a decent number of madness outlets, they're not as reliable at discarding cards as Wild Mongrel is. Kenji said "These [Deepcavern Imp and Gathan Raiders] only discard once. These [Urborg Syphon-Mage and Looter il-Kor] are must-kill." It makes a lot of sense that opponents are usually going to kill the 8-point-life-swinging Urborg Syphon-Mage and the Looter il-Kor on sight, so they can't be relied upon to provide a consistent discard outlet. I also talked with Kenji about playing 2 out of 3 Midnight Charms, asking him if he liked Midnight Charm better in 2HG because there are more potential targets for it than in one-on-one. He said that was the reason he liked Midnight Charm in 2HG, and also called out Essence Warden and Mire Boa as 2HG-empowered weenies that are great targets for the Charm.

Hirosawa is playing a pretty traditional red-green with double Blood Knight, Mire Boa, and Wild Pair, but not many super crazy things to tutor with it. Just playing a 2/2 and getting another 2/2 of your choice makes Wild Pair good enough, and taking it keeps it out of the hands of any Dliver player who would make the enchantment really ridiculous.

Their Veiling Oddity, Snapback, Gossamer Phantasm, and Bog Serpent did not make the cut.