I look up and down the first few tables after the Constructed portion of U.S. Nationals, looking for someone who's drafting skills should be well honed so as I might get to learn something as well as the rest of you guys. 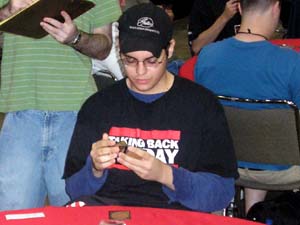 Adam Chambers went into the draft 3-0.

The person amongst the 3-0 pods whom I most respected was Adam Chambers, who appeared in the finals of Pro Tour-Atlanta (Team Limited) - which was the last time any Americans made the finals of a Limited event so it seemed like a good choice. He had come off of a nice 3-0 with Tooth and Nail, which he claimed never to have played a game with, but apparently the deck is just retarded and can't be beat.

Anyways, onto the draft and after a lengthy delay for who knows what, we are off to the races and busting boosters, which is obviously just the best thing ever.

Chambers' picks in all caps, other key cards listed.

This is the main deck that he decided to play in the end after about 30 seconds of deck building:

So his deck isn't too hot but it doesn't seem like there is much more he could have done. Black was obviously the best colour for him to be in, as the fourth-pick Kiku shows, and also the fifth-pick Clutch in pack 3, he was just very unlucky that there were no powerful black cards opened in pack 3 by the guys seated in all four spaces to his right. 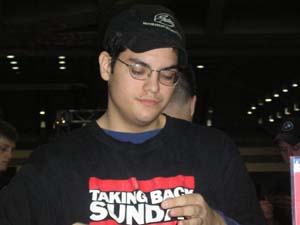 Chambers opted for the Teller over the Moth.

When I asked him about his first pick of Teller over Moth, he said that he only ever likes to draft white when he is white-red, and he genuinely thinks that Teller is the better card. I have seen many pros do that this weekend and in fact the guy on his right made the exact same pick in this draft, which kind of screwed him a bit, as is evident in the draft analysis.

Adam says that blue-black is one of his favourites which is why he didn't switch out of blue although it was quite apparent that not much was flowing from his right hand side, hoping to reap the benefits in pack 2. The reason why he took the Matsu Tribe-Sniper with the second pick in pack 2 is because he feels that it is the most powerful green common in the set and takes every chance he gets to put them in his deck. I would have to agree on that pick here, as it was obvious that blue was being cut and that there weren't many green drafters because Kashi Tribe-Reaver lapped out of his opening pack.

I would have to say that he was very unlucky in the way that the packs worked out for him, as the guy to his left seemingly went black, cutting him from the Betrayers goodies and there was just nothing coming for his deck in a very unfortunate pack 3. According to Adam, the secret involved in drafting the blue-black archetype is knowing which of the bad cards that come round late are good in the deck.

I sincerely hope he is right as he has two Quillmane Bakus and a Crawling Filth in his deck, but he still feels that he is good for a 3-1. I think that the deck is good for 3-1 on a normal pod, and although Chambers is the best player at his pod, the power level of the cards that he had no option but to pass might come back to haunt him.