Well, if skills at Magic: The Gathering have any bearing on actual intelligence, it seems that Antonino De Rosa is the smartest guy in the room, as he is the sole undefeated player at the end of Day One sitting on sweet record of 6-0-1. After playing a UrzaTron deck to 2-0-1 in Constructed, he blitzed his first draft 4-0 on pod 3, and now we'll see if he can repeat this feat on pod 1 and almost lock up his first Top 8 at U.S. Nationals. 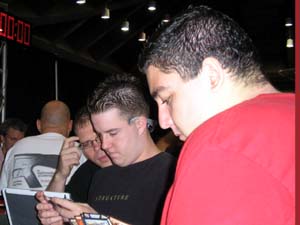 De Rosa wanted to cut blue in the first pack.

De Rosa's picks in all caps, other key cards shown.

Then some late Thoughbinds and some off-colour cards completed pack 1, and he was nicely set into drafting a solid blue-white deck. When I asked him if he had a favour toward white over black due to passing Hideous Laughter (which is not wrong by any means, I was just curious), he explained how he and his fellow teammates who were at the table had agreed to show each other their decks so he felt the power of the Laughter was lost when your opponents knew you have it. He took the Soratami Seer so highly because he wanted to cut blue heavily in pack 1 and reap the benefits in pack 2, although he doesn't think that the card is too hot.

Two Heart of Lights were in the last few cards he received, which can be very important in the blue-white deck as he has no answer to troublesome cards such as Matsu Tribe-Sniper and Frostwielder. These may well be two of the best cards in his deck at the right moment. It was interesting to see how Ant laid out his deck during construction, as he puts Ninja of the Deep hours in his spells column and not with the rest of all the monsters.

Then just some very late Araba Mothriders came round and made it into the deck, which looked like this.

When I asked him what his hopes were for the deck, he said that he would be happy with 1-2, but that is just Ant as he never has any confidence in his own playing ability. I personally feel that this is a 2-1 / 3-0 depending mainly on his opponents' decks and how many problem cards they have.

By the time I had gotten this far into the article, he has already dispensed with Craig Krempels in the feature match area so 1-2 is now a dead cert. He does have a very hard pod to contend with, but I have some confidence that we will see him coming back Sunday for the Top 8 possibly with some other members of his team …. THE SEVEN KINGS.