could be the last time Craig Krempels is referred to as "the champ," or he could retain the title for at least one more day if he's able to survive the day and once again make the Top 8 here at U.S. Nationals. In order to do that, though, he'll need a solid performance in a very strong draft pod that set up like this: 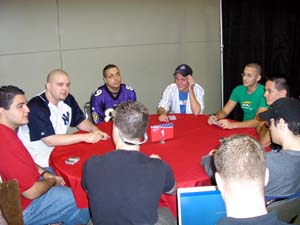 Krempels had a tough table at which to draft.

Cage of Hands, Soratami Savant, Honden of Cleansing Fire, and Sakura-Tribe Elder were the interesting choices available to Krempels in pack 1. Craig took the Cage and passed the rest along to De Rosa. Reciprocate, Consuming Vortex, Sustainer, Order from Taco Bell, and Hundred-Talon Kami were in the next set of cards. This time the blue card went into the pile, as Craig went for an archetype rather than choosing the best pick in his first color, and oddly enough, this pick may have submarined his whole draft.

Pack 3 was suddenly an issue, as Krempels grabbed Painwracker Oni over a River Kaijin, when Chambers was already in black in front of him due to a first-pick Nezumi Shortfang. The next pack held Waking Nightmare and little else. Gibber Jabber (Gibbering Kami) solidified the black cards, and the next pack contained Honden of Night's Reach, Blessed Breath, and a very late Mothrider Samurai, so Krempels went with the flow and grabbed the flier, and added another in the form of Lantern Kami with his next pick.

The next pack delivered Sensei's Divining Top to Craig's pile, while he passed an extremely late Kami of the Hunt that some green drafter down the line would gleefully snatch. The last of the playables was a Kami of the Painted Road that came in about pick 10 in the pack. 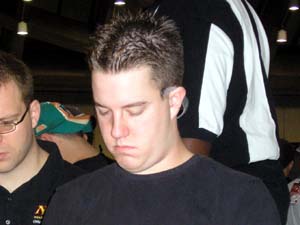 In front of Krempels, Chambers had a set of blue, black, and white cards that he was shaking his head at. This wasn't necessarily a bad thing for Krempels, since white-black as an archetype picks up most of its best cards from Betrayers of Kamigawa. In fact, at Pro Tour-London, the Dutch went so far as to intentionally go into white behind many of their neighbors because they knew that they would cut most of the rest of the table off from good white cards in pack 1, and then reap the benefits of that strategy in pack 2. The problem for Krempels now was that he didn't know De Rosa had first-picked Kabuto Moth behind him, and the pick where Craig briefly waffled and grabbed Consuming Vortex actually solidified Ant's position in white, meaning Craig would be cut off from at least one color on each side of him.

The open from Betrayers was a solid one, with Kira, Great Glass Spinner greeting him. Thankfully, Krempels went for the smart pick here and snagged a Horobi's Whisper for himself, giving the Kira to Chambers and pushing him into blue, while avoiding bickering over both of his colors from that side. Pack 2 was Split-Tail Miko, Kami of the Honored Dead and little else, so Krempels grabbed the little fox to help his early game. The next pack was Patron of the Moon, Pus Kami and pure garbage, giving Craig the banishing spirit. Pack 4 provides an interesting dilemma to drafters everywhere:

What do you pick - Moonlit Strider and Terashi's Verdict?

Sadly, Krempels had no Waxmane Bakus in his deck at this point and his soulshift chain was rather stunted, so he took the Verdict and shipped, probably realizing he needed removal as well. Serious headshaking ensued from here as the picks utterly dried up, failing to deliver goodies in either of his colors, meaning someone upstream was cacking all of them. Two Skullsnatchers and another Skullmane Bob were tossed down, but that was the extent of the good stuff for Krempels here - Betrayers was being far more unkind than usual in this pack if you want to end up with a good black-white deck.

Hail of Arrows was the obvious choice in pack 1, though there were some strong picks in other colors like Spiraling Embers. Pack 2 was between Death Denied, Nikko-Onna, Torii Watchward, and Kami of the Empty Graves. Pack 3 Was Moonwing Moth, Araba Mothrider, and another Nikko, this time with Moonwing Moth making the cut. Death Denied, another Empty G, another Watchward were present for the next set of cards, with a Shinen of Life's Roar chilling, waiting to go in that lucky green drafter's deck we mentioned way pack with that late Kami of the Hunt in pack 1. The next pack coughed up Raving Oni-Slave and Kuro's Taken as choices, and Craig grabbed the Taken, figuring he wasn't nearly aggressive enough to properly abuse the Slave. Hand of Honor was the first moderately late gift he'd seen in his colors for three packs and Craig grabbed it, clutching a thin ray of hope that he might pull this one out yet. Eiganjo Free-Riders were also a welcome addition for pick 7, before another Death Denied and Shinen of Star's Light, Kami of Empty Graves, and Nikko-Onna finished off the good stuff.

After the draft, Craig threw up his hands, saying, "What can you do? I got stone nothing out of Betrayers aside from my first picks, yet I didn't see any real signals in pack 1 that I should be moving. This deck can win a couple of games, but it's pretty bad."

Oddly enough, the table itself was really strange, with numerous players next to each other sharing colors, meaning several decks sported some less than stellar hits and Gerard Fabiano was playing an Invasion-esque 6-6-6 mana base. Egads. Reeves and Thompson both seem to have good decks and De Rosa's isn't bad either - look for those guys to practically lock up a spot in the Top 8 before they have to start playing Constructed again.