Possibly the coolest thing about covering the Players Championship, besides the sweet theater venue and all-you-can-drink soft drinks, is watching some of the most respected players in the game do what they do best.

And when you're talking about the best of the best doing their thing, you really can't get much better than watching Jon Finkel draft.

The Hall of Famer has a well-deserved reputation as a man who can pick up a draft format quickly, as he showed with his big return to high-level competitive Magic at Pro Tour Kuala Lampur in 2008, simply winning that Pro Tour after years away from the Pro Tour.

So there was virtually no way that we weren't sitting down with Johnny Magic himself to talk Draft, Magic 2013 and even a bit on how he evaluates new sets. 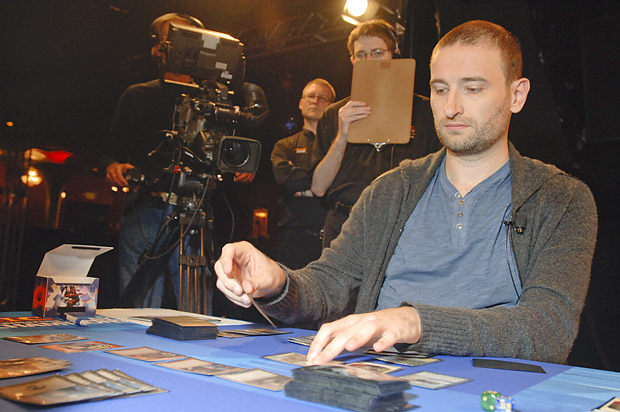 You have a reputation as someone who can evaluate and assimilate formats pretty quickly. What do you look for in a new draft format?

&quot;Well, you can take base sets pretty much at face value. They tend to be pretty obvious. But for other sets, you wander blind for a little bit. Try some stuff.

For example, in Innistrad, on day one people weren't milling themselves or their opponents, but that eventually ended up being the best deck.&quot;

How do you practice?

&quot;I tend to draft more in real life rather than online. That way you get to see other players' decks. &quot;

How often do you draft?

&quot;I draft once or twice per week, with a few drafts each time.&quot;

What advice can you give to someone who isn't very good at drafting?

&quot;I feel like drafting is one of those things that's an experience game.

You should very rarely counter-draft. Counter-drafting is almost never right.

Keep in mind you're drafting a deck, so it's not always right to just take the best card.

Drafting in real life helps, because you can discuss your picks with other people .&quot;

Why do you think you've had success in Limited formats?

It's also more of a skill-testing rather than a do-your-homework format. I never really did homework in school either. Also, I feel like my intuitive reactive mind helps. &quot;

What do you think of Magic 2013 limited?

&quot;It's one of the better Core set formats. There was a little too much variance in M12 because of how fast it was, only your first nine cards really mattered. I didn't really play M11 or anything for a few years before that, but I like M13.&quot;

How did you end up with the Blue-White deck you drafted?

&quot;I first picked Arctic Aven. There was a Talrand, Sky Summoner in the pack, but I don't think Talrand is very good. Then I took an Arbor Elf third, so I thought I might be blue-green splash white. Arbor Elf is one of the best green commons, that and Centaur Courser. I also took an Evolving Wilds over Crusader of Odric , which turned out to be wrong, but at the time I thought I was more blue-green with just a little white, but the white just kept coming.&quot;

Are there any archetypes or color combinations you think are best or prefer to draft in M13?

&quot;Not really, though I usually tend to like blue too much.&quot;

Thanks, Jon, and good luck the rest of the tournament.