While most players at Pro Tour Avacyn Restored have chosen to forgo black entirely during their drafts, Grand Prix Dallas Top 8 competitor Korey McDuffie has embraced it, drafting Mono-Black in both of his pods.

"Even though black is probably the weakest color in Avacyn Restored, I'm not afraid to draft it. If there are three people drafting black at an eight person table, then their decks are all probably going to be bad. But if I'm getting a strong signal, then I have no problem drafting Mono-Black." 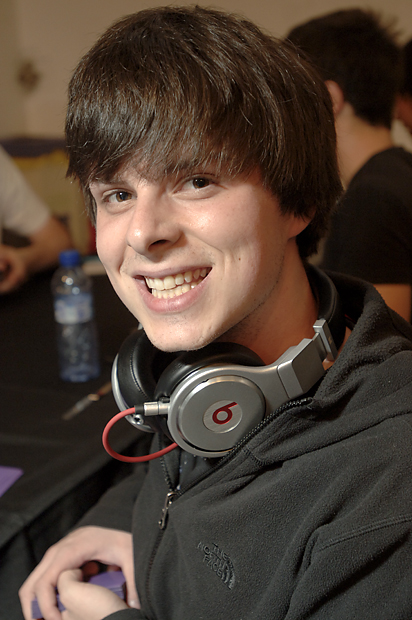 Korey McDuffie is more than willing to jump into black for Avacyn Restored if other players are unwilling to touch the color in a draft.

McDuffie then explained that he thinks players have overreacted to the fact that black is a relatively weak color, and that he's more than willing to take advantage of that fact.

"Players are extremely biased against black right now. For example: yesterday Jon Finkel said that when he looks at a pack, he doesn't even see the black cards."

So while players like Finkel are busy actively ignoring black cards, McDuffie goes out of his way to draft them.

"In my first draft I opened a pack with Griselbrand and three really good blue cards. I took the Griselbrand because I didn't want to fight with anyone over blue if I didn't have to. I second picked an Evernight Shade over more good blue, and I actually had to third pick a Mist Raven out of a pack that didn't have anything else in it. After that, I got passed a ton of good black, and wound up with an aggressive Mono-Black deck."

In his second draft, McDuffie put together a removal-heavy black deck that featured two copies of Barter in Blood and three copies of the frequently underrated Grave Exchange.

While McDuffie is confident that you need an abundance of removal spells to make use of your Grave Exchanges, once you have the right complementary pieces, it becomes one of the best cards in the deck.

Fortunately, you shouldn't have to spend early picks on Grave Exchanges in the hopes that you will get the right collection of cards to go with it.

"Because other people don't like Grave Exchange, I can count on getting them late, which is really good for the deck."

McDuffie concluded our interview with some advice for players who are looking to draft Mono-Black.

"I think the most important thing to know is that there are two kinds of Mono-Black decks: aggro decks (featuring cards like Soulcage Fiend), and control. But whichever one you're drafting, it's very important to prioritize two drops, especially Butcher Ghoul."

So the next time you're at a draft, and you think that the players at your table aren't giving black enough credit – it very well might be up to you to pick up those late Death Winds and punish your neighbors for their irrational aversion to the color.